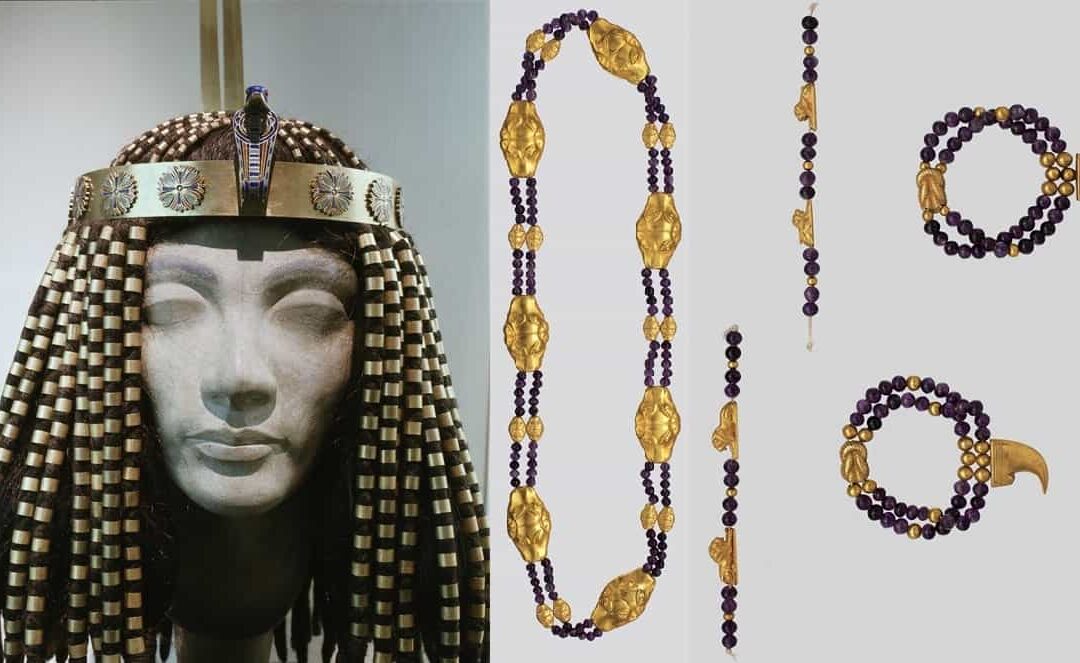 In 1914, the assistant of the famous Egyptologist William Flinders Petrie, Guy Brunton, discovered in the Egyptian necropolis of El-Lahun one of the most magnificent sets of gold jewelry ever found in Egypt and that belonged to one of the daughters of Pharaoh Senusret II…..

Between 1889 and 1890, the great British Egyptologist Sir William Flinders Petrie was in Egypt, commissioned by the British School of Archeology, exploring the pyramid of Pharaoh Senusret II (1845-1837 BC) in el-Lahun (in whose burial chamber he even arrived to penetrate).

But in the end the researcher had to leave without finishing his explorations and could not return to the site until many years later, towards the end of 1913.

In fact, his intention on this second visit was to study some of the subsidiary tombs that lay next to the site, royal pyramid.

In early 1914, Petrie then began to examine the platform surrounding the Pyramid of Senusret, and there he was able to locate various burials inside a series of wells, although unfortunately they were empty; most had been looted in ancient times.

In the course of this exploration, Petrie discovered a new well, a priori as unpromising as the others. But to make sure that it did not contain anything of interest, the Egyptologist made his assistant, Guy Brunton, descend inside it, who once inside found that, indeed, there was not much left to see.

What he could verify is that it was the tomb of a princess, possibly a daughter of Senusret II.

Brunton noted with dismay that the woman’s mummy had been torn to pieces by ancient looters in search of the amulets hidden among her linen bandages, but was able to identify her thanks to the fact that her name was inscribed on the canopic jars that still remain in the tomb: It was the princess Sit-Hathor-Yunet.

Disappointed, he was about to return to the surface when he suddenly noticed that in a corner of the tomb there was a niche full of mud.

Brunton began to dig carefully in the mud, and suddenly something glowed in the dark. His heart skipped a beat: It was gold. Brunton immediately informed Petrie that he decided to excavate the cavity immediately.

The excavation of that small 8-inch niche full of solidified clay in the tomb of that ancient princess provided archaeologists with one of the most magnificent treasures of ancient Egypt, an incredible set of jewels from the Middle Kingdom (1980-1760 BC) kept in several chests of ebony wood, which had been spoiled by the action of the water and the millennia.

From the mud emerged beads and more gold beads, solid gold tubes, cosmetic items, a mirror, vases, bracelets, chains … and even a gold crown and two pectorals.(one with the name of Senusret II and another with the name of Amenemhat III). All of this of exquisite quality.

Petrie described the painstaking work his assistant did on the tomb thus:

“For a week, Brunton spent day and night in the grave, extracting the objects from the clay without bending or breaking any. Every piece he unearthed and washed with water and with a camel hair brush, so as not to damage the surface. Then I would photograph them.”