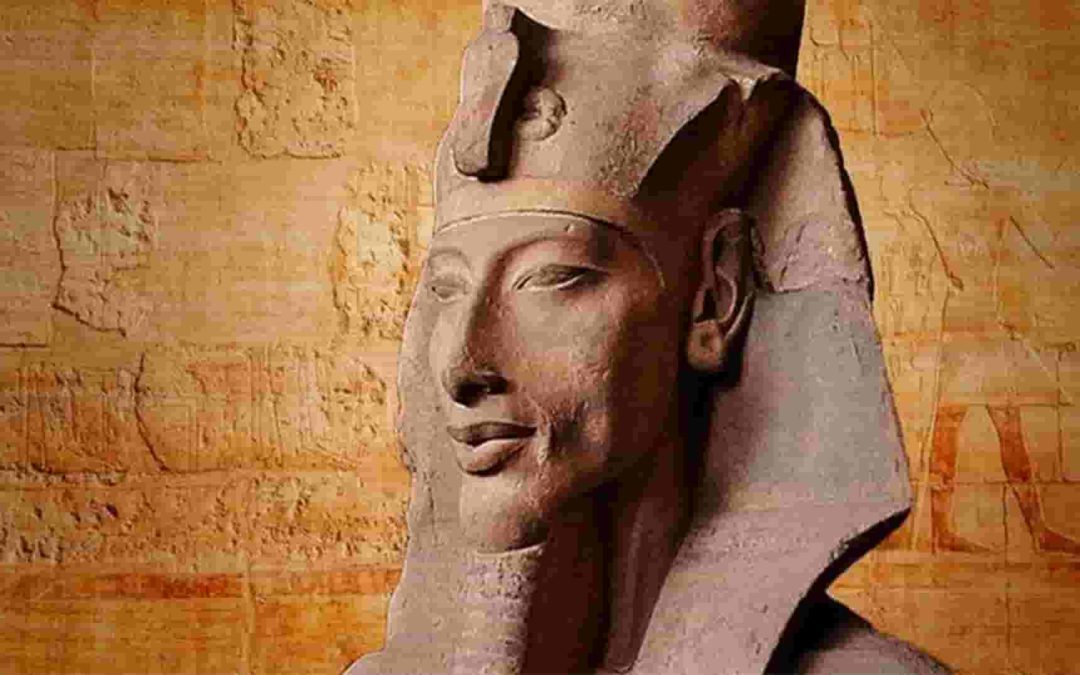 Akhenaten or Amenhotep IV – among many other names – was the tenth pharaoh of the 18th dynasty who reigned Egypt between 1353 and 1334 BC.

His elder brother Thutmose died prematurely, which made him occupy the throne after the death of his father Amenhotep III.

His reign implied great changes in Egyptian culture that led it to know him as the heretic pharaoh and the first monotheist in universal history.

When Akhenaten came to power, the first years were relaxed. He married the beautiful Nefertiti, although Kiya, his secondary wife, also stood out in ancient Egyptian history for giving him a son: Prince Tutankhamun.

Akhenaten remained in the city of Thebes and took care of building some buildings where the germ of the cult of Aten began to take shape, a deity that represented the solar disk in the sky and that was believed to be the spirit that encouraged life in the underworld.

But a few years later, Akhenaten devised a religious reform and imposed a new monotheistic cult dedicated to Aten.

This act caused some controversy, especially when he proclaimed himself the only prophet of God and his intermediary before men.

Immersed in his devotion to Aten, he ordered the construction of the new capital Akhetaten, which means “the horizon of Aten” or “next to Aten”, today known by the Arab name of the region: Tel el-Amarna.

He retired there and built more temples for solar worship, but to get the resources, he confiscated land, removed privileges from the priests and sought the support of the clergy of Heliopolis.

He rejected the authority of the high priest of Amun, as well as the cult of Amun and Osiris.

For their part, the Egyptian people did not accept to renounce their polytheism and even in the capital itself statues of other gods made during that time have been found.

With the religious change also an evolution in the Egyptian artistic representations arrived: the human figures became more naturalistic, with more organic lines, and the traditional iconography and the artistic conventions used until that moment were temporarily abandoned.

These deformities have been attributed to possible Marfan syndrome, a genetic and inherited disease that is characterized by an unusual increase in limb length.

Beyond the interpretations, the transition from monumental hieratism to curious naturalism expresses the relevance of the so-called “Amarnian revolution.”

Akhenaten not only imposed a new religious and political order, but also an artistic one. The stele that represents the royal family with tender gestures and the famous bust of the beautiful Nefertiti are some of these examples.

Akhenaten’s tomb: The mystery of the grave KV55

Sarcophagus found in KV55. The wig suggests that it was designed primarily for a royal woman. It contains mentions to the real favorite Kiya.

The addition of the pharaonic beard suggests a subsequent overhaul most likely for a real mummy, perhaps that of Akhenaten.

KV55 tomb was discovered in 6 of January of 1907 in the Valley of the Kings by Edward Ayrton, during an expedition sponsored by Theodore Davies.

It was thought to be a place of multiple burials, since it was initially identified as the abode of the mummy of Queen Mother Tiye, who was later, located in the KV35 tomb.

The remains found, in many cases destroyed, make their interpretation very difficult.

The doors have the Tutankhamun cartridges, the sarcophagus found bears the name of the royal favorite Kiya, the broken altar contains Tiye’s hieroglyphs and there are bricks with the name of Akhenaten.

One of the hypotheses is that the place would have functioned as a place of multiple burials at different times within the period of time that was from the end of the reign of Akhenaten to that of Ay.

Horemheb and his successors systematically destroyed everything related to Akhenaten and his family, including regarding Tutankhamun and Ay, to appear continuity with Amenhotep III, so there is no record of his burial, although it is estimated that he was buried in the Royal Tomb of Amarna.

After discovering the KV55 tomb with a sanctuary inside dedicated to Queen Tiye, various studies of the mummy buried there were conducted, which yielded the following results:

While some historians estimate that the mummy belongs to Akhenaten, based so much on that the sarcophagus contains the hieroglyphs of the name and the attributes of royalty (uraeus) erased, as in the existence of the bricks that bear the name of Akhenaten, other scholars estimate that the mummy is awarded to the successor Smenkhkare, based on recent forensic studies that give the mummified character an age of death close to twenty years, which strictly excludes Akhenaten.

In September 2010 , National Geographic announced in its monthly publication that a team of scientists led by Zahi Hawass had conducted a series of studies on the mummy of the pharaoh Tutankhamun, extracting DNA samples from the body of the Boy King.

DNA studies conducted on the mummy of Tutankhamun have allowed us to find out the identity of a series of mummies discovered a long time ago, but whose identity was unknown.

Such a genetic pattern of the mummy makes conclude that the inhabitant of KV55 would be none other than Akhenaten.

A tour of the Interior of the Tomb of Nefertari

The life and death of Queen Nefertiti