Home / Who Was king Tut? Why Was He Important for History?

Who Was king Tut? Why Was He Important for History? 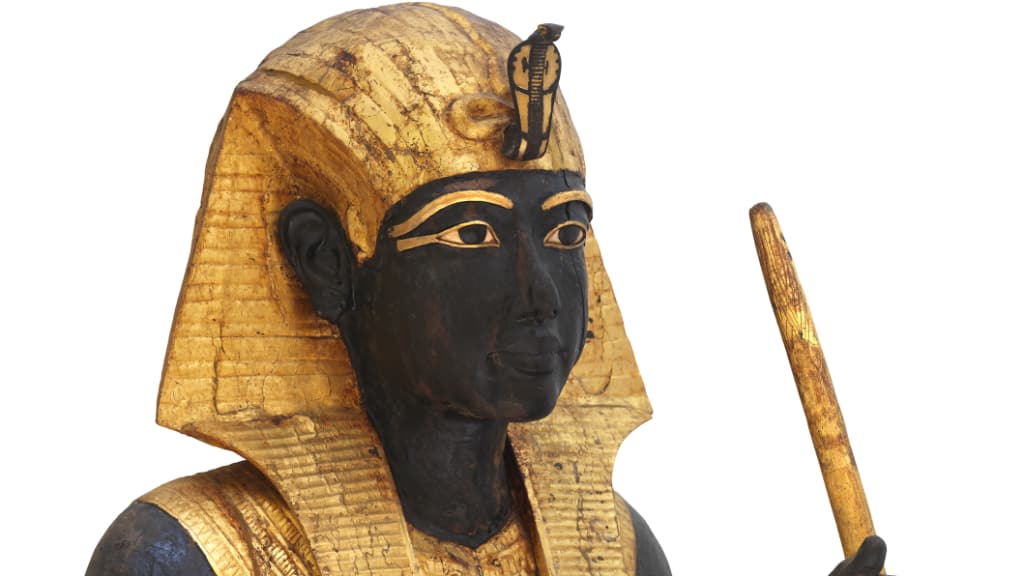 The origin of Tutankhamun: Who Was king Tut?

The first thing that needs to be clarified about this king, “one of the best knew of the Ancient History of Egypt (for his supposed curse and discovery of Howard Carter, not for his reign itself)”, is his family origin.

Let us remember a little where we left off, with the love triangle between Akhenaten, Nefertiti and Kiya.

We do not know for sure if Kiya was the mother of Tutankhamun, but what we do know is that he was Akhenaten’s son but not Nefertiti’s son, so his mother had to be another.

As for his original name, we know that it was Nebkheperure, adopting Tutankhaten as the coronation name. As you can see, both the name of this king and those of all the other descendants of Akhenaten end with -Aten, in reference to the solar god of Amarna.

Granite Statue of King Tutankhamun From Karnak Cachette, around 1330 BC.
Hidden beneath the floor of the grand Temple of Amun at Karnak for more than 3,200 years, this statue is one of a pair that likely flanked a gateway or entranceway. Its inscription describes King Tutankhamun as the divine ruler who restored traditional religion: ‘the good god who founded Thebes, upheld good laws, and maintained order.

The arrival to power of King Tut

The young Tutankhaten had ascended the throne at Amarna while still a child. However, shortly after his coronation, perhaps even from his first year of reign, or not much later, he left the city founded by his father.

It must be said that the fact that the Court leaves Amarna does not mean that all the people who settled down to live there will also move.

For some time people continued to live in Akhetaten (Amarna), regardless of whether the Court moved back to the city of Memphis, the traditional seat of government from the Old Kingdom.

Also, in a few months all the religious reforms that had been introduced in the Akhenaten era disintegrated: the old religious cults were restored at the same time that Thebes became again the great religious center of the country par excellence.

In the same way, since his Great Royal Wife was his step-sister (one of the daughters of Nefertiti and Akhenaten) Ankhesenpaaten, the name was changed to that of Ankhesenamun.

Many fans usually emphasize King Tut with qualifiers such as “the boy king”. However, the truth is that he was not at all the first king of the History of the XVIII Dynasty in ascending to the throne being a boy.

Due to this youth, in both cases there was an important female member of the royal family (Hatshepsut and Mutemwiya, respectively) who agreed to act as regent until the children could govern alone.

However, in the case of King Tut this possibility did not exist, since both Nefertiti and Akhenaten had died.

Therefore, the role of regent was carried out by a person without blood ties with the royal family, but who was an important army officer, nothing more and nothing less than the commander-in-chief of the army, named Horemheb.

It seems that this regency assured him a great future, since by exercising this office he won the right to succeed Tutankhamun as king if he died without had not offspring. Finally, Horemheb would become king, but that is another matter.

The Stela of the Restoration

The most indispensable source of knowledge that we have of the entire reign of Tutankhamun is the so-called “Stela of Restoration”, which offers an extremely negative description of the consequences that Akhenaten’s reforms had left the country.

In this stela is told how the temples of the gods had become ruins and how their cults had been abolished; how the gods had left Egypt, in the sense that if they were prayed, they did not respond…

The Stela of the Restoration

The wars of the reign of King Tut

Perhaps one of the most important phrases of this stela is when it mentions that the army that was sent to Syria to expand the borders of Egypt was not successful.

The importance of this last sentence may explain why the army stopped supporting the Amarna’s policy promoted by Akhenaten.

Tutankhamun is depicted crushing his enemies, probably Nubians and Hittites

With the accession to the throne of King Tut, and the dismantling of religious reforms, the army again supported the Crown, especially after the regent Horemheb carried out military confrontations with the Hittites, which threatened the northern Egyptian borders In Syria.

However, the truth is that these military skirmishes were not able to establish a new balance of power, reaching the Egyptian-Hittite conflicts until the time of Ramses II, fifty years later.

On the other side we find the simultaneous attempts to reassert the Egyptian presence in Nubia, which were probably more successful.

In Egypt itself, a campaign was launched to restore traditional temples and reorganize the country’s administration.

The treasury was headed by Tutankhamun’s treasurer, Maya.

Maya was also responsible for the gradual demolition of the temples and palaces of Akhenaten, first in Thebes and later also in Amarna.

In addition, as supervisor of the work in the great cemetery of the Valley of the Kings , Maya would be responsible for organizing the transfer of the mortal remains of Akhenaten and Tutankhamun to their respective graves.

The enigmatic death of King Tut

All the events surrounding the death of King Tutankhamun are the subject of controversy and debate, as they are still not very clear, and many theories have emerged over the last few decades, without any of these having been fully tested.

King Tutankhamun died unexpectedly and mysteriously in his tenth year of reign, in a historical context in which Egypt was involved in an important confrontation with the Hittites.

Why was King Tut important for History?