Home / The buried statues of pharaoh Menkaure in Giza

The buried statues of pharaoh Menkaure in Giza 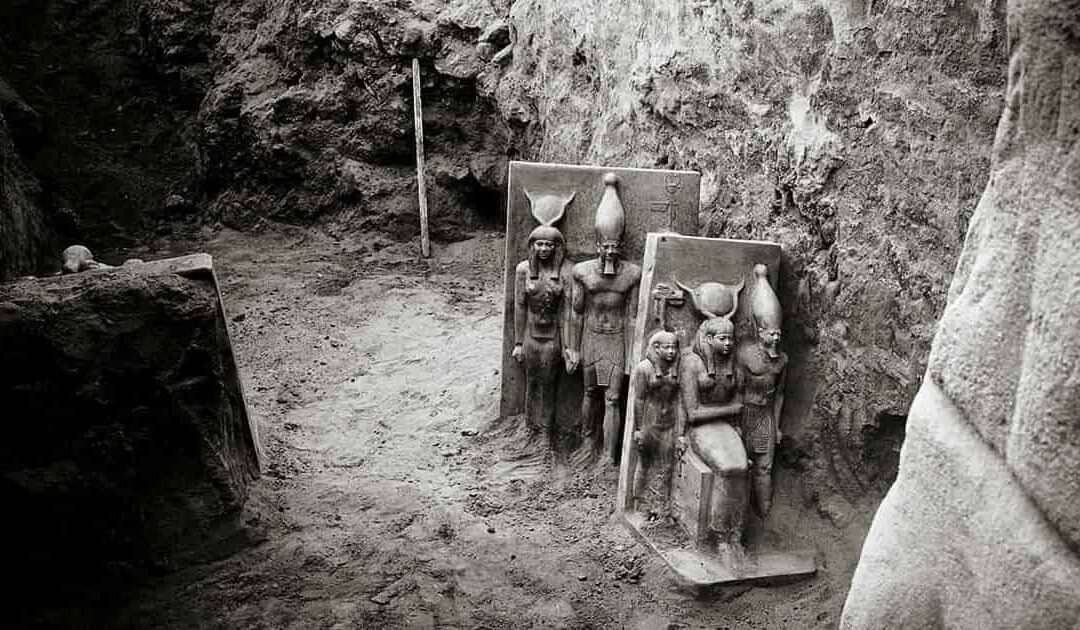 In 1902 an Egyptological “summit” was held on the terrace of the Mena House hotel in Cairo. It had been invited by Gaston Maspero, director of the Egyptian Antiquities Service, and some of the great archaeologists of the time were invited:

The German Ludwig Borchardt (who in 1912 discovered the bust of Nefertiti) on behalf of the German archaeologist George Steindorff, the Italian Ernesto Schiaparelli (who in 1904 would locate Nefertari’s tomb), and the North American George Andrew Reisner, known as the “American Flinders Petrie” for the precision and meticulousness of his methods.

The purpose of the meeting was to distribute the excavation areas on the Giza plateau.

The pyramid of Menkaure had already been explored in 1834 by the British Richard Vyse, so Reisner focused on investigating other elements of the complex.

His inquiries soon bore fruit. Along the east face of the pyramid, Reisner located the upper temple – where fragments of a colossal seated alabaster statue of the pharaoh appeared – and the remains of the road that joined this building with the lower temple or the valley (which has not been found yet), where the purification rites of the king’s mummy took place.

He also discovered the funerary chapels of the three satellite pyramids belonging to the wives of Menkaure and some tombs of funerary priests in charge of the royal cult.

In June 1908, Reisner, after carrying out some surveys, focused his attention on discovering the remains of the Lower Temple of Menkaure.

It was a raw brick construction with a limestone foundation, which gave the impression of having been hastily finished, perhaps due to the unexpected death of the king.

At the eastern entrance, a hall with four columns – flanked by rooms that looked like warehouses – led to a large patio that gave access to the offering room, with six columns, and the sanctuary itself, next to which some rooms opened.

It was in these rooms that Reisner made a sensational discovery in July 1908. Joseph Lindon Smith, illustrator of the expedition, recounts the moment of the discovery:

“I myself shared with Reisner the exciting opening of each of those rooms full of sculptures. Two alabaster portraits of the king, four complete statues, and the triad. Reisner could barely contain his excitement … “.

Thus, to the amazement of the archaeologists, magnificent sculptural groups emerged from the rubble: eight sculptures of Greywacke (a type of sandstone) each composed of three characters:

The pharaoh with the white crown of Upper Egypt; the goddess Hathor, with her characteristic headdress with two horns and the sun disk, and the personification of a nome or province of ancient Egypt.

Four of these sculptures, which received the name of triads, were fragmented and incomplete, but four others were found complete and in an excellent state of conservation.

Their function is uncertain, although they possibly had both a cult and a political component; a way of indicating that Menkaure was the lord of the whole country.

When Reisner believed that the temple in the valley of Menkaure had already revealed all its secrets, on January 8, 1910 another complete sculptural group came to light:

A representation of the pharaoh, wearing a nemes or royal handkerchief, accompanied by a woman who hugs him, possibly his wife, Queen Khamerernebty.

George Reisner recovered a large amount of material from the Menkaure funerary complex. Under the laws of distribution of archaeological finds in force at the time, Reisner took to the United States one of the complete triads and the group of Menkaure with his wife, in addition to some fragments and the colossal alabaster statue of the pharaoh from his high temple.

The rest of the triads that were complete stayed in Egypt.

Ancient Egypt: The opening of the mouth ritual