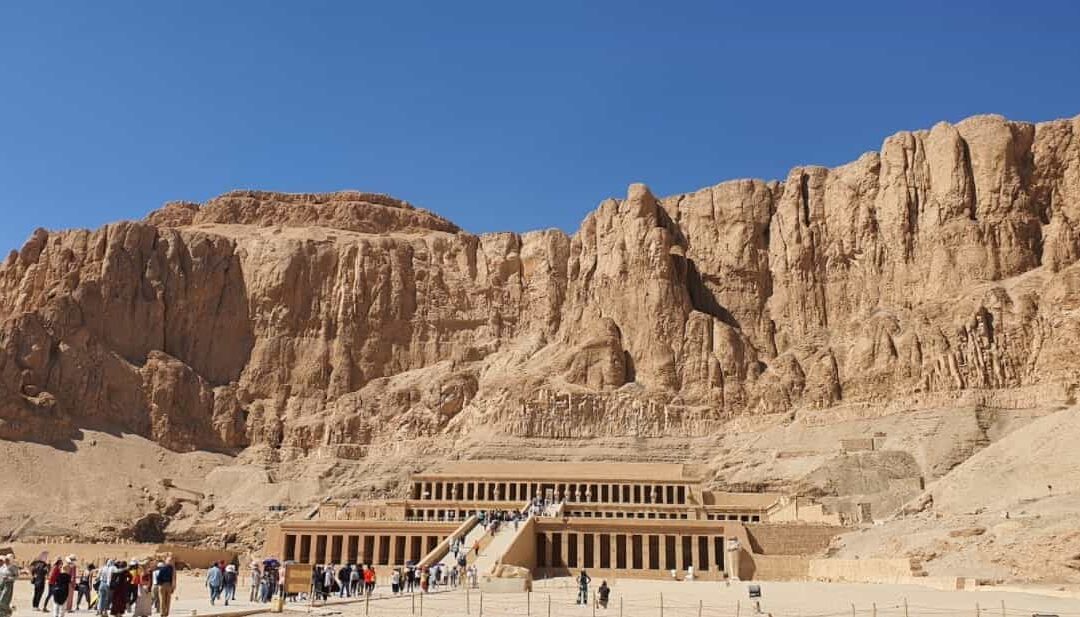 The funerary temple of Hatshepsut, known as “Holy of Holies” is located in the complex of Deir el Bahari, on the western fringe of the River Nile, near the Valley of the Kings, in Egypt.

This funerary temple was built in honor of Amun-Ra, the God of the Sun, and is located next to the funerary temple of Mentuhotep II. It is considered “one of the incomparable monuments of Ancient Egypt”.

The chancellor, royal architect and possible lover of Hatshepsut, Senenmut, oversaw the construction and probably designed the temple. Although the adjacent funerary temple of Mentuhotep was used as a model, the two structures differ in many of their characteristics.

The temple of Hatshepsut has three terraces with large colonnades that differentiate it from the centralized structure of the Mentuhotep model, an anomaly that may have been caused by the decentralized location of her burial chamber.

The stepped terraces reach thirty meters in height. Each level is made up of colonnades of square-section limestone pillars, preceded by Osirian statues.

The chapel of Anubis, in the northeast area of ​​the temple, has columns of polygonal section. These terraces are connected by a large central ramp, which in ancient times was flanked by gardens of exotic plants brought from the Punt, such as frankincense and myrrh trees.

The Hathor Chapel, to the southeast of the temple, has pillars with hatoric capitals.

The stepped form of the Mortuary Temple of Hatshepsut corresponds to the classical Theban form, with architectural elements such as pylons, law courts, hypostyle halls, open-air courtyards, chapels, and shrines.

The reliefs of the temple

The reliefs in the Temple of Hatshepsut tell the story of the divine birth of Queen-Pharaoh Hatshepsut, the first of its kind.

The text and the pictorial cycle also relate an expedition to Punt, a country on the shores of the Red Sea, from where the ancient Egyptians brought luxury products such as incense, myrrh, leopard skins and ostrich feathers.

Although the statues and other ornamental details were stolen or destroyed over the years, in its time, the temple housed statues of Osiris, sphinxes and numerous sculptures of Hatshepsut in different positions: standing, sitting or kneeling.

The main axis of the temple has an azimuth of approximately 116½ °, aligning with the solar ortho during the winter solstice, an astronomical event that currently occurs around December 21 or 22 of each year.

Sunlight enters the chapels excavated inside the Theban mountain. In addition, a system of light boxes allows a representation of the god Amun-Ra to be illuminated, secondly, a kneeling figure of Pharaoh Thutmose III and, finally, the image of the god of the Nile, Hapi.

In older days, 41 days before and 41 days after the winter solstice, a second light box allows sunlight to penetrate to the deepest chamber, enlarged and renovated in the Ptolemaic period, in which there is evidence of a cult of deified historical figures, such as Imhotep, the architect responsible for the construction of the Step Pyramid of Djoser, and Amenhotep (son of Hapu) , the supervisor of the works of the pharaoh Amenhotep III.

As for the alignment of early February, it would reflect the moment when Amun-Ra pronounced the oracle that served to enthrone Hatshepsut as queen-pharaoh.

The Temple of Hatshepsut is considered the Egyptian monument whose style is closest to that of classical architecture.

Representative work of the funerary architecture of the New Kingdom, which emphasizes the magnified image of the pharaoh erecting shrines to honor the gods with whom he will live after death.