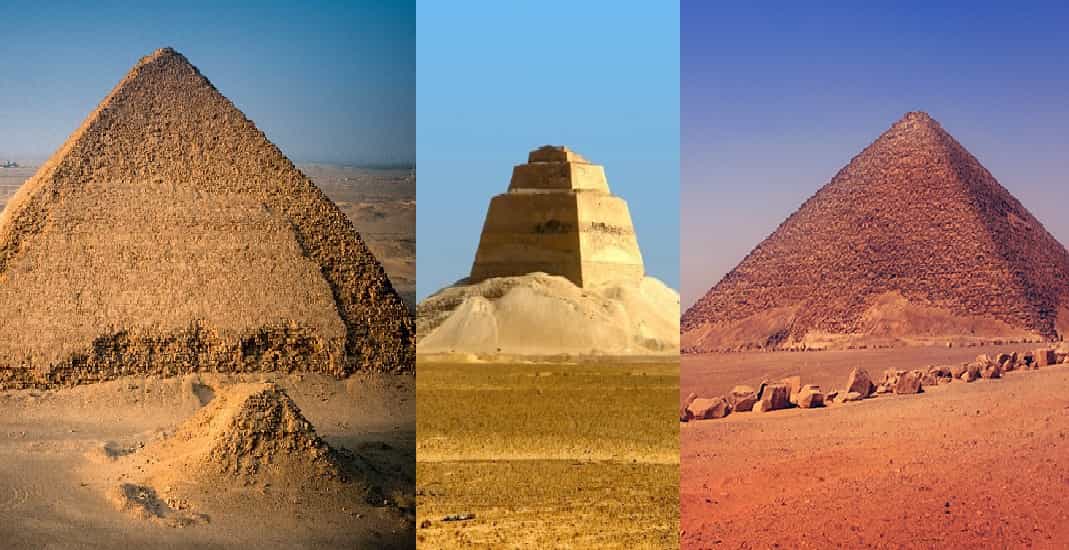 At the beginning of the Fourth Dynasty, Sneferu wanted to go one step further in achieving a perfect pyramid to be his abode of eternity. In this search, the pharaoh built at least three of these great monuments.

Contrary to what might be thought, the greatest pyramid builder in the history of Egypt was not Khufu, the pharaoh to whom the Great Pyramid of Giza is owed.

That title actually corresponds to his father Sneferu, who, according to scholars have calculated, used for the construction of the three pyramids that are attributed forty percent more cubic meters of stone than his son Khufu, the builder of the Great Pyramid of Giza.

Furthermore, Sneferu was the first Egyptian pharaoh to build a perfect pyramid with smooth faces and to develop the classical structure of Egyptian funerary complexes, which would last for several centuries.

King Djoser, thanks to his well-known architect Imhotep, was the first to build his tomb entirely in stone, thus offering a sense of eternity to buildings that were previously made of adobe and therefore soon faded away.

In addition, in this great work that he carried out in Saqqara (a necropolis near Memphis, the capital of Egypt), Imhotep dispensed with the typical mastaba, a rectangular funerary building with sloping walls.

He replaced it with a stepped pyramid, made up of a total of six levels that reached 62 meters in height. It should be noted that this was the tallest building in the world until Sneferu’s reign.

Engineering feat and embodiment of the power of the pharaonic state, the stepped pyramid had a characteristic structure, in which scholars have seen the reflection of a stellar symbolism typical of Egyptian culture at that time.

Thus, the main axis of the complex, 544 meters long, is oriented from north to south and the entrance to the pyramid is located on the north side, as is the funerary temple of the pharaoh, attached to the pyramid on a base of two meters high.

Furthermore, the so-called serdab – a room on the north side of the pyramid in which the statue of the pharaoh’s ka (his spirit or life force) was placed – had two openings through which a statue of Djoser could observe Dubhe and Kochab, two important circumpolar stars.

During Dynasty III, the kings Sekhemkhet and Khaba erected buildings in Saqqara and Zawiyet el-Aryan similar to the step pyramid of Djoser.

The same did Sneferu at his pyramid at Meidum, a necropolis located 55 kilometers south of the stepped pyramid at Saqqara. There the pharaoh erected a great funerary monument in the form of an eight-step pyramid, with a central masonry tower and sloping walls, to which superimposed layers were added, also sloping with a 75º inclination.

However, at the end of his reign Sneferu launched a third constructive phase that would radically change the appearance of the Pyramid of Meidum.

At the base, the workers raised a leveled platform of limestone blocks, and on this they were placing successive horizontal courses of stone.

Finally, the entire construction received an exterior cladding of fine limestone from Tura. In this way, a perfect pyramid was obtained, with four smooth faces of 51º inclination, 144 meters in base and 92 in height.

The pyramid of Meidum

The architectural innovation promoted by Sneferu in Meidum is related to the rise of the solar cult during Dynasty IV, which promoted the identification of the pharaoh with the sun god Ra.

It is no coincidence that Huni, Sneferu’s predecessor, was the first monarch to inscribe his name and titles on a cartouche, the oval that symbolizes Ra’s journey; nor that Djedefre, Sneferu’s grandson, was the first pharaoh to be called Son of Ra.

According to this vision, the pyramid would symbolize the benben, the primordial hill, that first piece of land that, after the creation of the solar god Atum, emerged from the waters of the nun, the inert, dark and silent primordial ocean.

The pyramid, like the primeval hill, represents creation and rebirth and becomes the vehicle for the revitalization of the deceased pharaoh.

If the pyramids of Dynasty III symbolized stairs to the starry sky, now the pyramid, as a solar element, could also express the idea of ​​the rays of the Sun that allowed the king to rise to the solar divinity.

With their smooth faces that glowed thanks to their coating with white limestone from Tura.

According to this new conception, the main construction axis of the funerary complex became the east-west, instead of the previous north-south.

This is how it was intended to promote the union of the king with the solar god in his daily journey, from when he appeared in the east in the form of the Khepri beetle, passing through its culmination at noon as Ra, in the form of a solar disk, and its sunset by the west in the form of a ram, Atum.

The pyramid of Meidum marked the definitive triumph of this new model of funeral ensemble. Sneferu’s work includes for the first time all the characteristic elements of pharaonic funerary complexes from then on:

A satellite pyramid next to the main one, a funerary temple, another temple located on the river bank and a ramp that linked these two buildings. .

According to the solar model, the funerary temple was attached to the eastern face of the pyramid, instead of the northern one, although access to the interior was still from the north side, as in the pyramid of Djoser.

From this entrance, about 18 meters high, a descending corridor of almost 60 meters in length and an inclination of 28º starts.

Sneferu built a second pyramid at the Dashur necropolis, 45 kilometers north of Meidum. The final form this monument took is unique. Started as a pyramid with a 60º inclination, later an envelope made of blocks inclined 6º inwards and a reduction of the slope by five degrees was added.

From 47 meters in height, the slope of the faces of the pyramid was reduced to 43º, thus giving it the peculiar appearance of a “rhomboid pyramid”or the Bent Pyramid, as it is known.

It is not known whether this change in slope was due to structural problems that had to be solved on the fly or if it had a symbolic meaning:

The double slope would represent, for example, the unity of Upper and Lower Egypt. Once completed, the pyramid reached 105 meters in height, with a base of 188 meters on each side.

The Red pyramid of Dahshur

The internal structure of the Bent pyramid is unusual because of its two entrances. One is, as was customary, on the north side, 12 meters high, and leads to a corridor 80 meters long that leads to a horizontal corridor; this, in turn, leads to a chamber with a false vault 17 meters high.

The second entrance, originally camouflaged behind a cladding block, is on the west side, 33 meters high. It opens onto a descending corridor that continues as a horizontal corridor after 65 meters, where two chambers with closing blocks were arranged and, finally, a burial chamber with a false vault 16 meters high.

The third pyramid of Sneferu, popularly known as the “Red pyramid“, was built two kilometers north of the previous one, in Dahshur.

It is the second pyramid with the highest base (220 meters), only ten meters less than that of the Great Pyramid. However, it is also the one with the lowest slope of its faces (43º), so it only reached 105 meters in height.

Its access is 28 meters high on the north side, and from there starts a descending corridor of 63 meters that ends in a horizontal corridor.

Why do pyramids have that shape?