Home / Stele of Amenemhat and his family 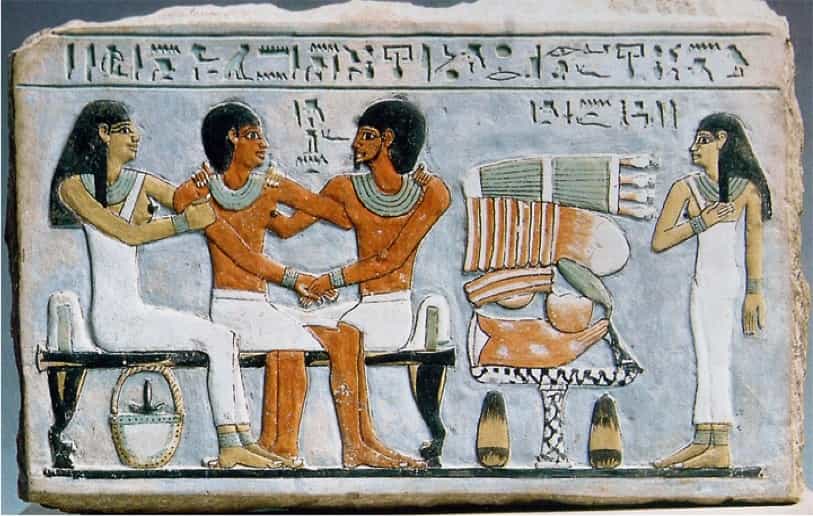 The Funerary Stele of Amenemhat is a limestone plaque that has retained its original bright colors and depicts a funeral banquet scene in which an entire family is present.

What is a Stele?

A stele is a slab of stone or wood that encloses text or information and was used and erected in the ancient world as a monument. In ancient Egypt, steles were used to commemorate people or events.

The Funerary Stele of Amenemhat

In the image on the stele, the father, mother, and son named Antef are depicted sitting on a long bench with lion claws. They are shown in a moment of intimacy and affection, embracing each other.

A table with offerings of meat and vegetables is in front of the family, separating them from a female figure identified by the hieroglyphic inscription as Ipy, the deceased’s daughter-in-law.

The skin of the two women is painted with light colors, as was customary, and both are shown wearing a long white dress that is open at the chest, in addition to necklaces, bracelets, and anklets.

The two men, who have darker skin tones, are shown wearing a white skirt and a collar and bracelets. The father is recognizable by his black beard, which is thinner at the cheeks.

The horizontal hieroglyphic inscription on the stele forms an invocation to Osiris to provide food for the “venerable” couple, Amenemhet and his wife, Iy.

The Funerary Stele of Amenemhet is on display in room 21 of the Egyptian Museum in Cairo.

Inside One of Ancient Egypt's Biggest Royal Weddings