Home / 10 secrets and curiosities of the Great Sphinx

10 secrets and curiosities of the Great Sphinx 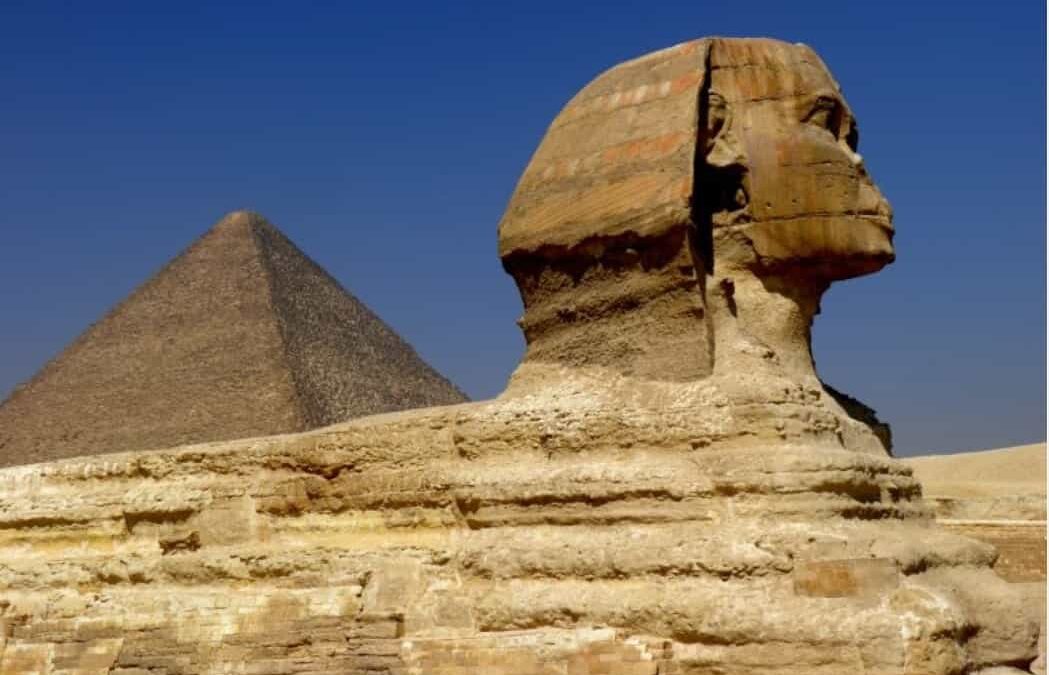 Situated on the Giza Plateau, on the west bank of the River Nile, is the mysterious Great Sphinx.

Carved out of a large block of limestone, the impressive monumental sculpture measures seventy-three meters long and twenty meters high.

It is one of the largest and oldest monuments globally, and even today continues to fascinate Egyptologists and visitors with the mysteries it still hides.

1- When was the Sphinx built?

Although there is still controversy today regarding the exact date of construction, it is generally accepted that it was built around 2500 BC by Pharaoh Khafre, the builder of the second pyramid of Giza.

However, there are others researchers, let’s say unorthodox, who trace the date of construction to around twelve thousand years ago – the middle of the Age of the Ice.

2- What was the Sphinx originally called?

The name Sphinx came into use during classical antiquity, but it is still impossible to know what it was called when it was built since it is not mentioned in any inscription from the Old Kingdom.

What we do know is that in the New Kingdom, it was called Hor-em- akhet, meaning Horus of the horizon.

In addition, the Greek sphinx was a mythological beast with the body of a lion, the head of a woman, and the wings of an eagle, despite how the Egyptian sphinxes lack wings and have a male head.

3- The workers who built the Sphinx ate like kings

Although we have the traditional image that the workers who built the pyramids were slaves who worked at the rhythm of the whip, the excavations led by the Egyptologist Mark Lehner have revealed that the workers were well fed and received top-quality meat from cows, sheep, and goats.

4- Centuries sleeping under the sand

During its life of thousands of years, the Great Sphinx has been a victim of the desert sands.

The first known restoration of the Sphinx occurred thanks to Thutmose IV when it lay almost completely buried under the sands.

Subsequent centuries almost completely buried the monument again, until in the 1920s when it was completely excavated.

5- Did Napoleon order to destroy the nose of the Sphinx?

The lack of a nose on the head of the Sphinx has generated various speculation and legend.

The main blame attributed to Napoleon Bonaparte’s order to destroy the nose; however, the drawings made by the Danish Frederic Louis Norden, made in 1738 show that the Sphinx already lacked it before the birth of Napoleon in 1769.

Other histories attribute the destruction of the nasal protuberance to the British troops or the Mamelukes.

However, a fifteenth-century Arab historian attributes the destruction of the nose to a Sufi Muslim. Seeing the local peasants making offerings to the Sphinx to increase harvests, he decided to destroy the false idol, starting with the nose, for which he was hanged for vandalism.

For centuries, the Sphinx wore a long beard that ended up falling off at some point in its history.

The French archaeologist Vassil Dobrev affirms that the beard was not carved with the original sculpture, since when it came off, it did not damage the chin. Thus, the false beard would be added later, surely during the restoration project of Thutmose IV, in the fourteenth century BC (back when the hipster trend of growing a beard started).

The remains of the beard of the Great Sphinx are currently preserved in the British Museum.

Originally the sphinx was adorned with various colors, although it is almost imperceptible due to erosion. Traces of red paint can still be seen on the face and blue and yellow pigment on the body.

8- The dream of Thutmose IV

Between the legs of the Great Sphinx is a granite slab containing the following inscription:

…the royal son, Thutmose, arrived while walking at noon and sitting under the shadow of this mighty god, dozed off and slept at the time that Ra is on the summit [of heaven]. He found that the Majesty of this August god spoke to him with his own mouth, as a father speaks to his son, saying: Look at me, look at me, oh my son, Thutmose; I am your father, Hor-em-akhet-Kheperi-Ra-Atum; I grant you sovereignty over my domains, supremacy over the living… Here is my real condition that you can protect all my perfect members. The desert sand on which I am lying has covered me. Save me, causing everything that is in my heart to be executed.

The slab is known as the Dream Stele, and it narrates the dream Thutmose IV had in which the Great Sphinx promises him that if he digs it up, he will make him pharaoh.

Therefore, the son of Amenhotep II got down to work and unearthed part of the Sphinx in what would be the first documented attempt to excavate the Great Sphinx.

The Great Sphinx is oriented from west to east, so if we consider that it is estimated to be at least four thousand five hundred years old, the Great Sphinx has seen more than a million sunrises throughout its long life.

Perhaps it is obvious that having the body of a lion, the Great Sphinx has a tail (I was going to put a tail, but I have discarded it to avoid jokes in bad taste), but when I saw it live for the first time, I was surprised that the end of the gigantic sculpture has a large coiled tail.

The seven most important Egyptian temples