Home / How was the mystery of Hieroglyphs solved? 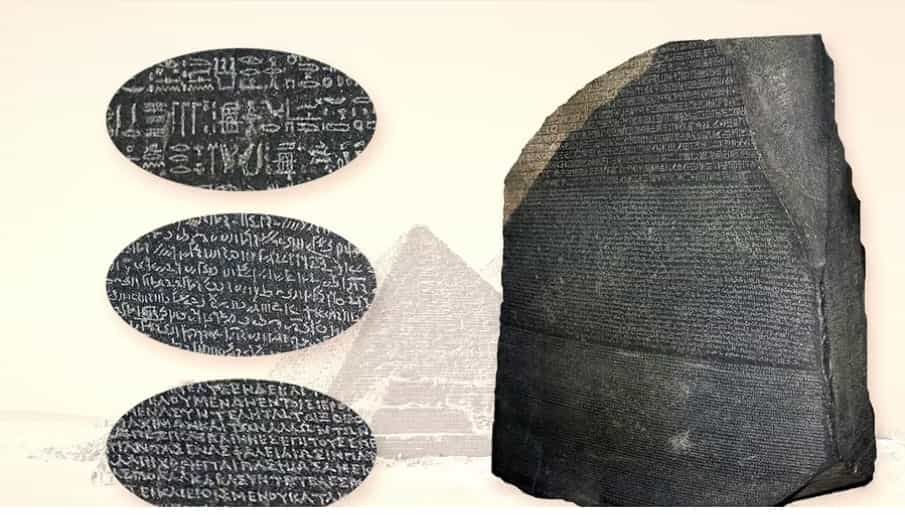 What is the Rosetta stone?

Although initially it was part of a larger wake and what can be seen today is a fragment, it is world famous because it allowed the Frenchman Jean-François Champollion to decipher the Egyptian hieroglyphs in the 19th century, a very important finding to understand the past of the world.

This piece contains an official decree on the worship of Pharaoh Ptolemy V (who reigned from 204 to 181 BC) written in three languages: ancient Greek, ancient Egyptian and Egyptian demotic.

After being proclaimed, a carved copy of the edict was sent to each temple in Egypt, but eventually all copies were lost, except one.

Why is the Rosetta Stone important?

The Rosetta stone was discovered in Egypt in 1799, when nobody knew how to read Egyptian hieroglyphics.

However, it was assumed that the piece contained the same text in all three languages, so great efforts were made to decipher the writing of ancient Egypt.

Finally, the academic Jean-François Champollion published the first translation of the inscriptions of the stone in 1822; by the way, the basis of what would be Egyptology as a modern discipline.

Languages on the Rosetta Stone

Being inscribed in three different writings (from top to bottom: Egyptian hieroglyphics, demotic and ancient Greek).

Demotic: the local language of the people in Egypt at that time.

Here we present the journey that the legendary object made, and which took it from the sands of Egypt to a room in the British Museum in London:

Where the Rosetta Stone was found?

The piece was discovered on July 15, 1799 in the town of Rashid in Egypt. The site was occupied by the French army (who called it Rosetta) during the Napoleonic campaign of Egypt and Syria.

The troops found the piece inside an old wall while digging to build a new fort outside the town.

The officer in charge realized the relevance of the piece and sent it to Alexandria, where archeological pieces that the French planned to send to Paris were being concentrated.

Napoleon had even established an Egyptian Institute of Science and Arts to carry out research and collect antiques from the time of the pharaohs.

Two years later, Napoleon’s troops were defeated by England and the Ottoman Empire in 1801. Upon surrender, the Capitulation of Alexandria was signed.

One of the clauses of this treaty established that all the antiquities found by the French would become part of Great Britain. Thus, the stone left the port for England.

The stone reached the English port of Portsmouth in February 1802. At this time, Portsmouth was the most important military port in England, and during the 19th century it became considered the most fortified in the world.

Today it is still a naval base of the English Royal Navy and its historic docks are major tourist attractions.

The Stone continued on its way to the English capital from Portsmouth. In July 1802, the Rosetta Stone was presented to the British Museum by King George III in person.

At first, the weight of Egyptian antiquities was so much that the floors of the original enclosure did not support them, so a new wing was built for these acquisitions.

The Rosetta Stone has been on continuous display at this institution since that year.  It only left the Museum when it was protected during the First World War.

After more than two centuries in London, the piece remains the most important of the entire museum.

The Rosetta Stone: discovery to decipherment

The French army is prevented, by a British blockade, from leaving Alexandria with the newly discovered Rosetta Stone. 1799

Jean-Joseph Marcel creates the very first proof sheets of the Stone and they are sent to the National Institute in Paris. January 1800

Baron Silvestre de Sacy studies a copy of the Stone’s Greek text. He writes a letter of his findings to the French Ministry of the Interior. 1801

English scholars seek to underplay the French contribution to the Rosetta Stone’s decoding. A French translation of the text on the Stone is produced. 1800-1802

The British take possession of the Rosetta Stone from the French after the latter surrender Egypt. A Latin translation of the Stone is made. 1801

The Stone arrives in England in February 1802. Reverend Stephen Weston completes the first English translation of the Greek text on the Stone. 1802

British scholars send copies of the stone to The Vatican, the Society de Propaganda Fide, the Imperial Library in Vienna and the Academy at Madrid. July 1802

Swedish diplomat and scholar Johan David Akerblad compiles a rudimentary Egyptian ‘alphabet’ and a list of Greek and Egyptian proper names as they appear on the Rosetta Stone. 1802/03

Thomas Young publishes his research in the Supplement to the Encyclopedia Britannica. The research is 20 pages long and simply entitled ‘Egypt’. 1819

On 10 May 1831, Jean-François Champollion commences delivery of his course on archaeology at the College de France, with his first lecture focused on his analysis of the Stone. 1831

English translation of the text contained in the Rosetta Stone

In the reign of the new king – who has received his father’s royalty – lord of the crowns, glorious, who has consolidated Egypt and is pious towards the gods, superior to his enemies, who has restored the civilized life of men, lord of the Feasts of Thirty Years, as Hephaestus the Great; a pharaoh, like the Sun, the great pharaoh of the upper and lower lands, whom Hephaestus has approved, to whom the Sun has given him the victory, living image of Zeus, son of the Sun, Ptolemy the ever-living, beloved by Ptah;

THE DECREE: The high priests and prophets, and those who enter the inner shrine in order to robe the gods, and those who wear the hawk’s wing, and the sacred scribes, and all the other priests who have assembled at Memphis before the king, from the various temples throughout the country, for the feast of his receiving the kingdom, even that of Ptolemy the ever-living, beloved by Ptah, the god Manifest and Gracious, which he received from his Father, being assembled in the temple in Memphis this day, declared: Since King Ptolemy, the ever-living, beloved by Ptah, the god Manifest and Gracious, the son of King Ptolemy and Queen Arsinoë, the Parent-loving gods, has done many benefactions to the temples and to those who dwell in them, and also to all those subject to his rule, being from the beginning a god born of a god and a goddess—like Horus, the son of Isis and Osirus, who came to the help of his Father Osirus; being benevolently disposed toward the gods, has concentrated to the temples revenues both of silver and of grain, and has generously undergone many expenses in order to lead Egypt to prosperity and to establish the temples… the gods have rewarded him with health, victory, power, and all other good things, his sovereignty to continue to him and his children forever.

Who is the Egyptian Sun God Ra?