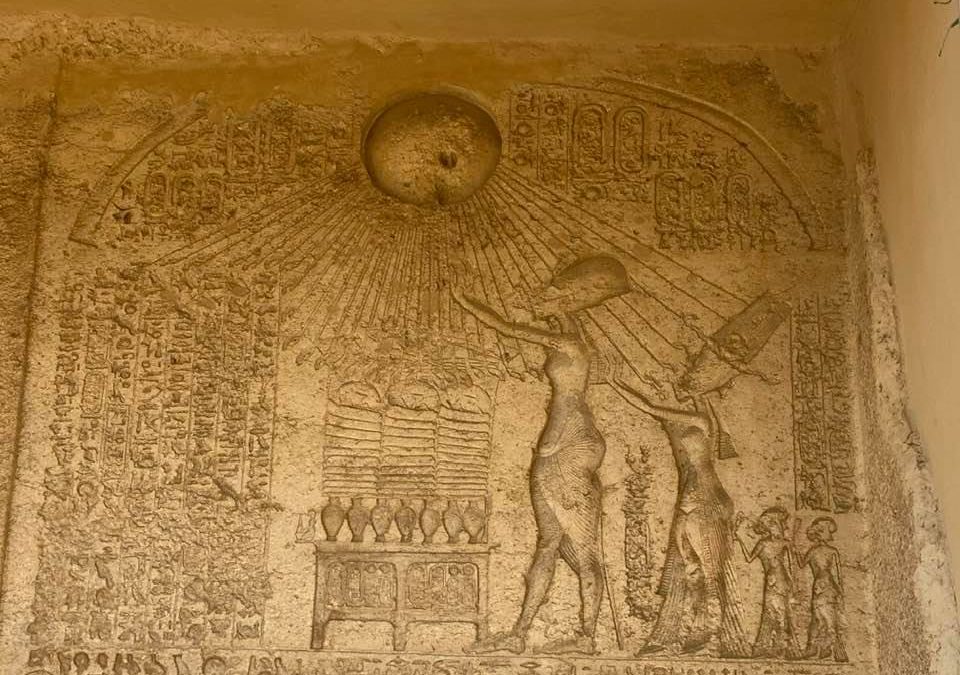 Ancient Egyptian art: The styles of painting, sculpture, crafts and architecture developed by the civilization of Ancient Egypt from the year 5000 BC until 300 d. C.

This art is characterized by a sense of order: clear and simple lines, combined with simple shapes and flat areas of color. Art reflects the social, religious and political situation.

It was linked from the beginning to religion and power, to the service of the pharaoh and the ruling classes.

The artists were not free, they were limited to following pre-established rules of representation, dictated by the priests; They were considered simple artisans, although they enjoyed a certain social recognition.

In these periods: decorative painting (in ceramics) or symbolic (in graves) and small objects utilitarian and magical.

They emphasize the stone vessels, the “maces” and “palettes” votive, like the one of Narmer.

It amazes the perfection, delicacy and monumentality of ancient Egyptian art, with a characteristic style that arises during the first dynasties and remains almost unchanged in three millennia of culture.

It presents juxtaposed figures in superimposed planes. The images are represented with hierarchical criteria, for example: the pharaoh has a size larger than the subjects or the enemies that are next to him.

The profile canon predominated, which consists in representing the head and the limbs of the profile but the shoulders and the eyes in front.

The paintings are found on papyrus and tomb walls, the bas-reliefs mainly on the temple walls. The most typical scenes were those of everyday life or those of “Beyond”.

Another artistic field in which ancient Egyptian art reached high levels was sculpture, dominated by the law of frontality.

Ancient Egyptian sculpture was of great importance not only for its decorative character, but also for its relationship with the religious ideas of the ancient Egyptians.

They practiced exempt sculpture or round bulge, as well as the relief (bas-relief and snow-relief).

The main characteristics of ancient Egyptian sculpture are the use of stone (hard material), the law of frontality, rectilinear vision, the canon (18 fists) and its idealism.

These characteristics show the purpose of the execution of the sculptures: their durability over time, since often their goal is to house the soul after the death of the body, which is especially important in the case of exempt sculptures.

The statue of Djoser, from Saqqara, is the first monumental expression of the divinization of the pharaoh.

Of the IV dynasty, it is necessary to highlight the statue of Khafre’s diorite, which was in his temple of Giza, where he appears seated on his throne culminated by Horus, and that of Menkaure flanked by the goddess Hathor and the protective god.

Other outstanding works are the Great Sphinx of Giza (representing Pharaoh Khafra) and that of Rahotep and Nofret.

Egyptian religious architecture is characterized by its monumentality from the Old Kingdom, with the use of stone, in large blocks, building system and solid columns.

It arises in a society with a strongly centralized and hierarchical political power, with a religious conception of immortality, which should reflect its magnificence and durability.

It is achieved thanks to mathematical and technical knowledge, sometimes puzzling for the time, the existence of very experienced, well-organized artists and craftsmen and the abundance of easily carved stone (limestone and sandstone).

The most original constructions of monumental Egyptian architecture are the “pyramid complexes”, temples and tombs.

During this period, huge buildings are built, built with large blocks of carved stone. It is the time of the construction of immense pyramids, ceremonial temples and beautiful sculptures.

During Dynasty III stands: The stepped Pyramid of Djoser in Saqqara.

In Dynasty IV the largest pyramids are built. Highlights:

Pyramids are built with more perishable materials (adobe). The hypogea are replacing the mastabas as graves.

The sculpture was characterized by greater realism, especially in portraits.

The royalty was represented as high-ranking personalities, but without becoming already the image of a god on Earth, as was the case in the Ancient Kingdom.

This same criterion was followed by the Egyptian nobility. In the temples the polychrome bas-relief was lavished. The painting was used profusely in the decoration of tombs.

Egyptian literature reaches its zenith with the Tale of Sinuhe and the Texts of the Sarcophagus.

The construction of temples and hypogea is emphasized:

During the Saite Dynasty the models of the Old Kingdom are imitated and the use of bronze in the statues being generalized.

The demotic developed rapidly. The Persian kings of the first domination respected ancient Egyptian customs, promoting the restoration of some Egyptian temples.

The languages ​​used were demotic and Aramaic, using hieroglyphs only in architectural elements.

From the end of the New Kingdom the ancient Egyptians were ruled in some periods by kings of other nations but maintained their culture and artistic customs until the time of Roman domination.

During the Ptolemaic period there was a great development of art, new temples were built, the Museum and Library of Alexandria, and the Lighthouse of Alexandria.

The shapes in the sculpture are hellenized. Manetho wrote his book on the history of Egypt. The temples erected or completed during the Ptolemaic dynasty stand out