Home / Who is the Egyptian Sun God Ra?

Who is the Egyptian Sun God Ra? 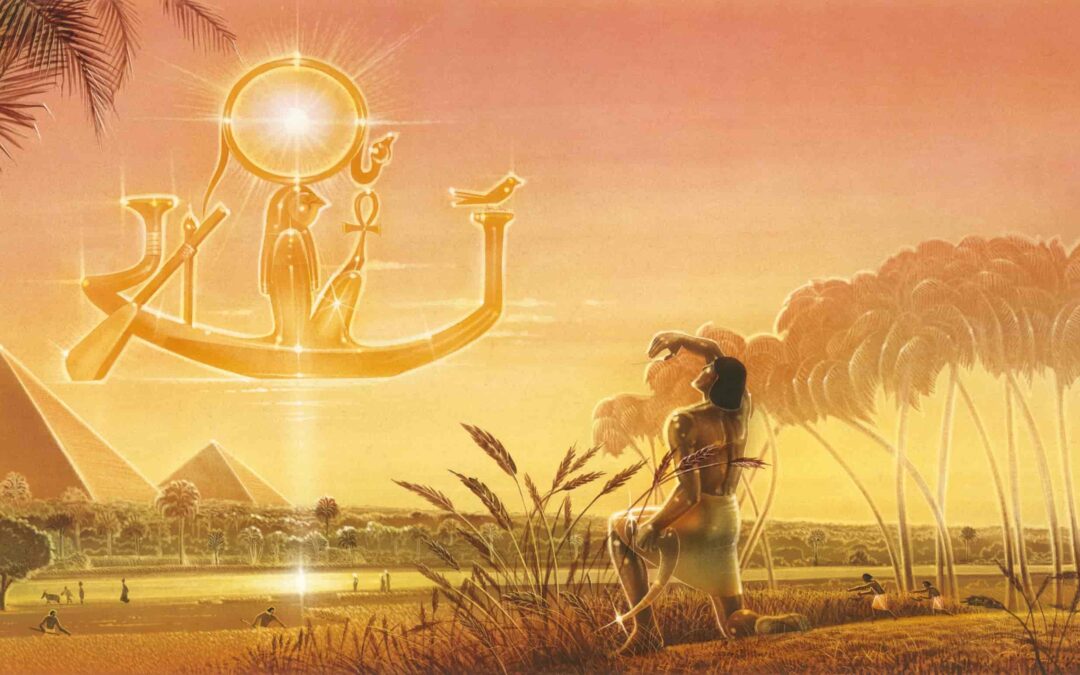 Ra: “The Sun”, solar god of Heliopolis in ancient Egyptian religion. Ra was the symbol of sunlight, giver of life, as well as responsible for the cycle of death and resurrection.

His most common representation was that of a hawk- headed man, on which he carried the solar disk.

Another form of worship that was given to this deity was a solar god falcon-headed, crowned by the solar disc and uraeus, with scepter uas and Ankh.

At the beginning of the Old Kingdom, Ra was only one of several existing solar gods, but by 2400 BC he had become the official god of the pharaohs, who were considered his children, and even his incarnations.

During dynasty V he was elevated to national god and later linked to the Theban god Amun to become Amun-Ra, the main deity of the ancient Egyptian religion.

During the Middle Kingdom his importance was increasingly affiliated and combined with other chief deities, although in Thebes he was identified as the local god Amun in the form of Amun-Ra, revered as the “sole creator of life.”

Ra retained supremacy for centuries, except during the short period of atenism in the time of Akhenaten (c. 1350-1335 BC), when the monotheistic cult of Aten prevailed in Egypt.

Even the brief period during which Amenhotep IV – which changed his name to Akhenaten, tried to impose on Aten, the solar disk, to the detriment of Amun, is interpreted by the historians as a sample of the persistence of the old cult to Ra.

The identification of Amun-Ra with Zeus or Jupiter was recognized by Greeks and Romans. The cult of Amun-Ra has been linked on numerous occasions with that of Apollo (Rome) by the solar symbology that both represent.

Ra’s identity was often confused with that of other gods and experienced different mergers in an attempt to culturally unify the country.

Amun-Ra: As the cults of Amun and Ra were becoming increasingly popular in Upper and Lower Egypt, respectively, they combined to create Amun-Ra, the solar creator god.

Atum-Ra was another deity formed from two different deities. Ra shares more similarities with Atum than with Amun.

Atum was linked specifically with the evening sun. Both Atum and Ra were considered “father of the gods” and “father of the pharaohs”, being profusely worshiped. Thus, it was inevitable that the two deities merged under the name of Atum-Ra.

Ra-Horakhti, was really more a title or manifestation, than a compound god. It was intended to link Horakhti to Ra – as an aspect of Horus at dawn.

It has been suggested that Ra-Horakhti simply refers to the Sun’s journey, from horizon to horizon, as Ra, or that it means an aspect of the god Ra as a symbol of hope and rebirth.

This was probably encouraged because Ra and Horus were linked to the Sun and Pharaoh.

Khepri, the depicted god in the form of a beetle that drives the morning sun, is sometimes seen as the manifestation of Ra at dawn.

Khnum was also considered a veiled manifestation of Ra; Khnum would be an aspect of Ra at sunset.