Home / Triad of Menkaure: What makes it so unique? 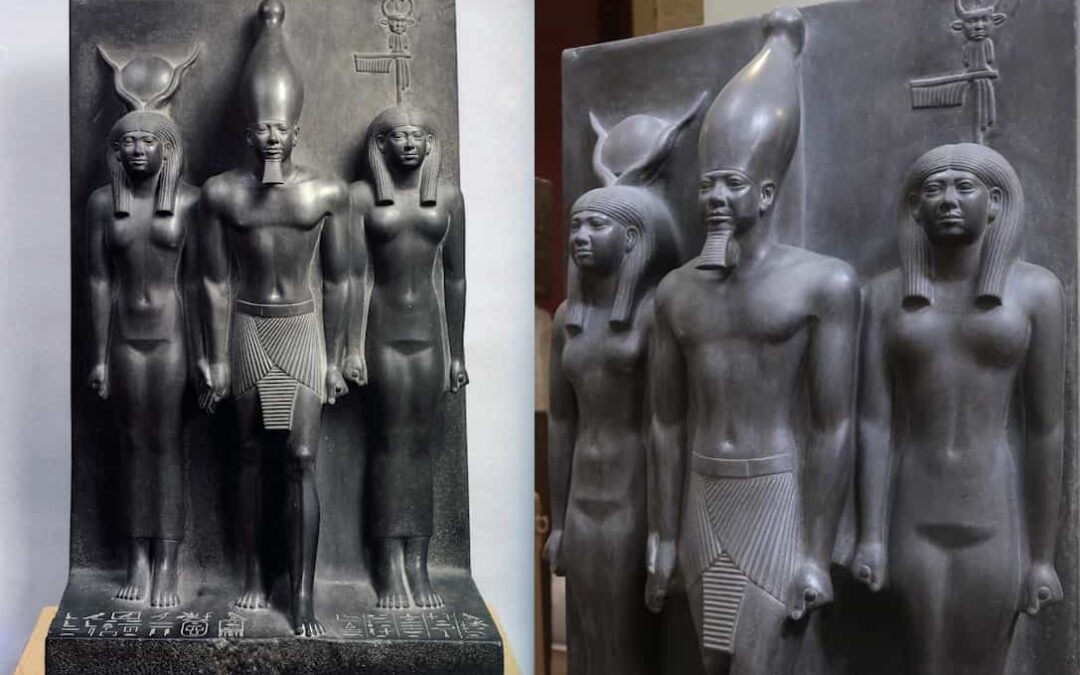 This Menkaure Triad is the most important piece of the entire set of statues found by George Reisner in the vicinity of the Giza temple. The sculpture stood out from the beginning for its realism, excellence, and austere beauty, qualities that have made it one of the most emblematic works of the Cairo Museum.

During excavations in Giza in 1908, the American Egyptologist George Reisner located diverse sculptural works of magnificent craftsmanship buried next to the temple of Menkaure.

The sensational find included several sculptures showing the pharaoh between two divinities known as Menkaure Triads. These representations were common in Ancient Egypt and served to celebrate the union of the pharaoh with a major and local deity.

The three groups of statues of Menkaure fully reflect the classical idea of court sculpture in which the human nature of the pharaoh is transfigured into a divine dimension.

Within a rigid stylistic and compositional scheme, the pharaoh’s figure, crowned with the white crown of Upper Egypt, clearly dominates the other two figures, both in size and because of its central position toward the observer. He wears a shendyt, a short-pleated skirt, and two cylindrical objects in his hands.

The figure on the right is the goddess Hathor, wearing a tripartite wig crowned by her attribute (cow horns and a solar disc), holding the symbol of eternity, the shen. To the King’s left is a minor divinity of local influence, representing a Nome or province of Upper Egypt.

A brief inscription at the feet of the figures describes the statues: Hathor is “the Lady of the house of the sycamore in all her seats”, the sovereign is “the King of Upper and Lower Egypt, Menkaure eternally loved”, and both receive offerings “of all things” of the represented Nome.

For the ancient Egyptians, beauty was an immutable value that reflected the perfection of the cosmos and the gods, including the pharaoh.

The magnificent representation of the triads, each one carved from a single block of stone, reveals the hand of an expert artist capable of harmoniously modeling various parts of the body of each figure, suggesting their forms under the garments and softening their delicate volumes.

Warriors of the Pharaoh