Home / Warriors of the Pharaoh

Warriors of the Pharaoh 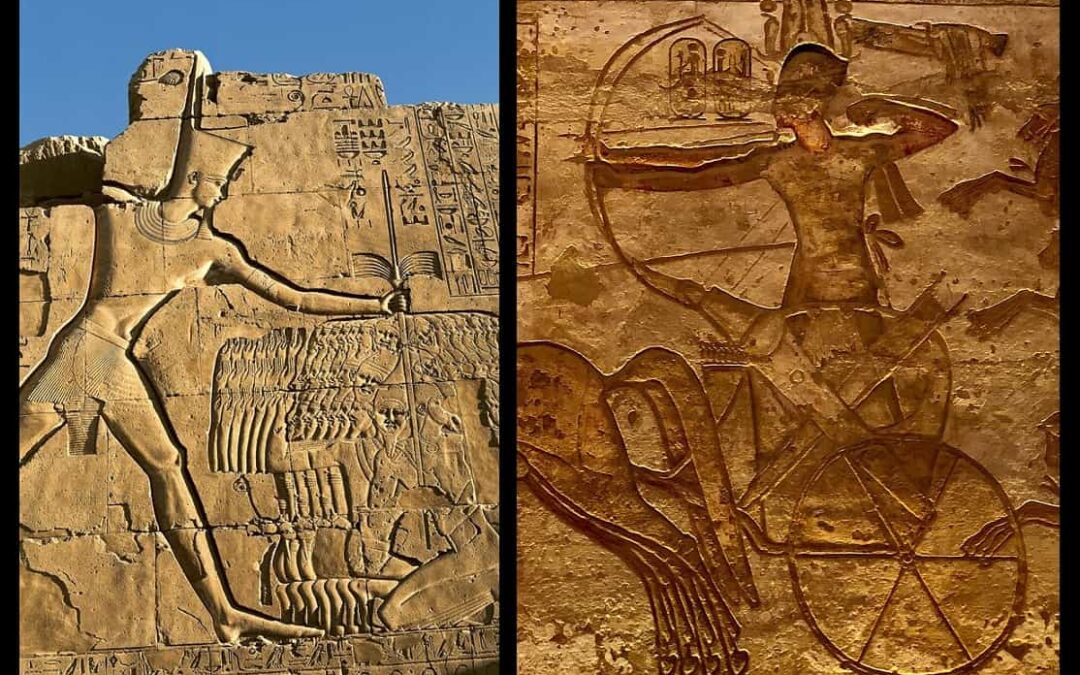 The Ancient Egyptians faced many foes during their long history, including the Hyksos, the Hittites and the ‘Sea Peoples’, all of which stimulated advancements in military technology.

Hemmed in by natural barriers – the desert, the Mediterranean and the Red Sea – the ancient Egyptians were mostly concerned with staving off threats from the desert tribes and the Nubians to the south.

A ‘forward policy’ emerged, by which the Egyptians pushed aggressively into neighbouring territories, and this evolved until the Egyptians were campaigning in Syria, Libya, Nubia and the Kush. The pharaoh’s status as a warrior king became of paramount importance.

During the New Kingdom period, ancient Egyptian military might reached its zenith, with war chariots and siege craft increasingly important, although the use of actual siege engines appears to have been limited.

Chariots were not a traditional part of the ancient Egyptian army until they encountered them in their expeditions into Asia, along with other new military technologies.

The ancient Egyptians of the Old and Middle Kingdoms did not even make much use of horses, except for scouting and delivering messages.

The Hyksos invasion of ancient Egypt, which resulted in them gaining control over areas in the eastern delta, was originally thought to have been facilitated by the widespread use of chariots, but that is now disputed.

What is clear is that the ancient Egyptians learned about chariots and quickly embraced the concept. Steady improvements in design – the wheels were at first solid, then made with four spokes and later with six – made chariots sturdier and faster, but they remained primarily a missile platform in the ancient Egyptian army.

This contrasted with the use of chariots by other peoples. The Hittites, for example, manned heavy chariots with three men – a driver and two spear-wielding troops. For the ancient Egyptians, two-man crews in a lighter chariot worked best, with a driver and an archer teaming up.

Thousands of these chariots could harass an enemy effectively from a safe distance, and by the time of the New Kingdom, arrowheads were bronze rather than the original flint.

The chariot soon became the most prestigious element on the battlefield, and pharaohs are often depicted wielding a bow from a chariot. The gold-plated example found in the tomb of Tutankhamun confirms that they were highly regarded symbols of military prowess.

The heavy spear was the main weapon throughout the different phases of the ancient Egyptian army. It was used as a thrusting weapon rather than being thrown like a javelin, and used in conjunction with a wide, wooden shield. Spearheads were originally flint or copper, becoming bronze in later periods.

Heavy infantry would advance towards an enemy in formation, presenting a wall of shields over which the spears could be thrust.

This should not be mistaken for the highly disciplined use of shields and spears in the Greek phalanx tactics, however – Egyptian spears were far shorter.

A shield would typically be about 85cm (33in) in length, and heavily decorated ceremonial shields were often buried with pharaohs and other dignitaries. They were also carried by chariot drivers.

Axes were an important secondary weapon, and a variety of axehead designs were developed. Strictly a close-range weapon, a bronze axehead would be affixed to a wooden pole and used in a slashing motion.

Bows were originally made from animal horn, then wood, and the composite design had been adopted by the time of the New Kingdom.

This design added range and power, but made the weapon harder to wield, so simpler bows never fell out of use completely.

During the New Kingdom, the ancient Egyptian military became a far more organized and effective fighting force. Nowhere was this more apparent than within the ranks of the infantry.

By the time of Ramesses II this was a highly sophisticated arm. Troops were divided into divisions of around 5,000 men. In the army Ramesses took into battle at Kadesh, he had four such divisions, named ‘Amun’, ‘Ra’, ‘Ptah’ and ‘Sutekh’.

Each division was divided into 20 companies of 250 men each, with further divisions down to platoons of 50. Platoons were commanded by the ‘great ones of the fifty’.

The heavy infantry wore no armour, but carried large shields and had spears as their main weapon, along with axes and swords.

Complementing the heavy foot soldiers were archers, by now recruited in ancient Egypt and armed with composite bows. Their job was to disrupt the enemy from a distance while the heavy infantry formations closed to engage.

Archers often went into battle on chariots, enabling them to keep their distance from the enemy. If forced to fight, they had small shields and daggers.

There was a solid logistical system to keep the men and horses fed and watered, including a sizeable baggage train and supply ships.

The ancient Egyptian navy was originally limited mainly to use on the Nile, but it did serve a function as a supply and transportation arm. It was never considered separate from the army itself.

Ships could either be made from reeds or from wooden planks, the latter being more suited to engaging in battle.

During the reign of Ramesses III, ancient Egypt was threatened by the ‘Sea Peoples’, and naval engagements were fought in which the ancient Egyptians appear to have won through superior tactics, despite having inferior ship designs.

In an echo of Egypt’s chariot tactics, they employed lighter ships to harass the enemy from a distance, peppering them with fire from bows and slingshots.

Source: David Smith. All About History – Book of Pharaohs

The Saqqara Bird: Did Ancient Egyptians Have Flying Machines?