Home / Who Was the Tutor of Alexander the Great? 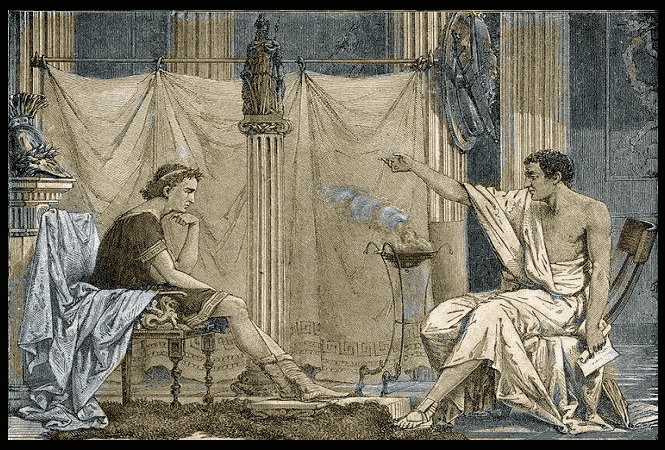 Back in 336 BC, the murder of Philip II was one of the greatest assassinations that the era of antiquity ever saw.

The sudden incident led to his son’s rise to the throne. This is where the epic journey of Alexander’s victories began.

Alexander III famous around the globe as Alexander the great was merely 20 when he took the throne. A lot has been written about the heroics of adult Alexander.

But, what about his early days? What was his childhood like? That’s something we rarely read or hear about. So let’s dive a bit deeper to get the taste of Macedonian environment that saw the childhood of Alexander the great.

Birth and childhood of Alexander the Great

The story of Alexander III of Macedonia began in July of 356 BC. He took birth in Pella as the son of Olympia of Epirus and Philip II.

His father was battling against Potidea which was one of their Athenian allies. Olympia was the fourth wife of Philip and Alexander was his second son.

However, Alexander’s elder stepbrother Philip III Arrideo had intellectual disabilities and hence was declared unfit to be the king.

This is what the destiny planned for Alexander and he went on to becomes the successor to Philip II after his death.

Alexander spent the first 14 years of his life in Pella’s royal palace. He lived with his mother Olympia and his foster-mother Lanice.

He was deprived of his father’s company who had been busy conquering the Greek world. Alexander the great got Lysimachus of Acarnania and Leonidas as his first teachers who taught him mathematics, literature, music, and geometry.

With their teachings, the little Alexander got fascinated for Greek literature especially stories and Homeric heroes, Achilles, the hero of the Trojan War, and Heracles.

Along with intellectual studies, Alexander’s was also trained well physically. Hunting had been one of the most favorite activities for the young Macedonian nobles.

The little Alexander used to practice it since a quite young age. Talking of his personality, he was a passionate being since his young days.

He was also known for being carried away by fits of anger and affection and for his courage and resolution for glory.

The School of Pages and the youth of Alexander the Great

After the age of 14, Alexander the great attended the School of Pages for higher education. The school was founded by his father for educating the young lads of the major Macedonian noble families.

The pupils from these families would move to Pella court to be educated militarily with the crown prince about the most wanted Greek values.

Throughout these years in the School of Pages, these young people became personal assistants of the prince. They all learned together, shared tables, guarded and even fought at the prince’s side.

Being a part of the royal pages was a great honor for a Macedonian family. So nobody could deny this opportunity.

With such an arrangement, Philip II achieved two objectives including a long term and a short term goal. Firstly, it would produce a sense of fidelity, friendship, and companionship in the families for the future king.

Also, the school guaranteed the flourishment of loyalty and good behavior in these families towards their son when he is in power.

Of all the people who tutored Alexander the great, none is as famous or important as Aristotle.

The sage was not unknown in Macedonia, since his father Nicomachus had practiced as a doctor at Pella’s court. The relationship between Aristotle and Alexander the Great was extended for years, specifically between 343 and 335 BC. Alexander’s father, Philip II of Macedon, hired the great philosopher Aristotle to tutor his sun from the age of 13.

With his companions of the high nobility, Aristotle taught them a wide variety of subjects: History, literature, geography, mathematics, ethics, politics, philosophy, medicine…

In fact, in the future it would be Alexander the Great himself who would cure many diseases of his soldiers by prescribing drugs and therapies.

In the literary field, Aristotle placed special emphasis on the Iliad of Homer, which would become the favorite book of the young prince; and in the works of Herodotus, Thucydides and Xenophon, which influenced him deeply when it came to the conquest of Asia.

Also, according to Callisthenes, great nephew of Aristotle by his sister and chronicler of Alexander in his campaigns, Alexander the Great was also a great admirer of the poetry of Pindar and the Greek tragedy, especially Euripides. Bust of Alexander the Great in the Capitoline Museums of Rome

It should be noted that throughout this process of intellectual formation, physical and military training did not stop, being constant the training in equestrian, gymnastics and athletics.

Aristotle is considered, along with his teacher Plato, one of the most important philosophers not only of ancient history, but of the whole history of philosophy.

Aristotle was born in 384 BC in the city of Stagira, north of Greece.

His parents were dedicated to medicine, his father was a doctor in the court of the King of Macedonia, and so from a young age he became interested in scientific knowledge.

When he became an orphan, at the age of sixteen, he traveled to Athens to join the Academy, where he became Plato’s most brilliant disciple during the twenty years he remained there.

Unlike Plato, who never married or had children, Aristotle married twice in his life, with Pitiade first and Herpílide later, and had a son and a daughter.