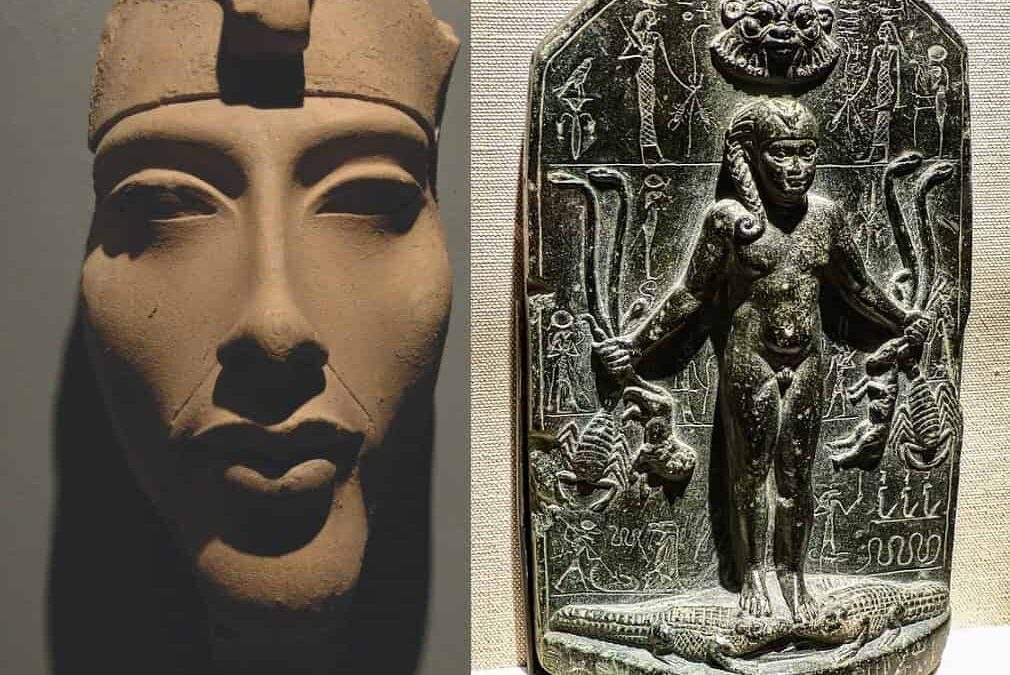 The ancient Egyptians were dependent on magic for protection for themselves, but also their families and businesses. Most (semi-) scientific books on this subject state that magic was still practised at this time, but material evidence to support this statement is seldom provided.

Research into the Amarna Period has so far been focused mainly on the Aten temples, the royal family and the religious revolution.

But to truly understand this period, and how the average Egyptian lived during the Amarna Period (especially within the capital Akhetaten), we have to look at the material evidence in the workmen’s village of Amarna.

However, he soon began to elevate the god Aten above the other traditional gods. He created a new iconography and in his fifth year took on a different name, ‘Akhenaten’, abolished the other state gods and moved the capital to Amarna where he lived for nearly 17 years.

However, as we will see later, Akhenaten’s revolution was not as complete as he would have wanted, and soon after his death, Tutankhamun returned Egypt to the worship of the traditional state god Amun.

The ancient Egyptians believed that magic was first used by the creator god to create the world and everything in it. The creator god then gave magic to humanity to elevate them above the rest of his creations.

By studying their traditional myths, the Egyptians learned about the gods and how to use magic. Mythology was a cornerstone of Egyptian society, but this fell away when Akhenaten abolished the traditional gods without providing a new mythology for his Aten religion.

Yet the average Egyptian still needed protection against all sorts of dangers: disease, dangerous animals, ghosts, and many other horrors.

It is therefore reasonable to accept that the ordinary Egyptians did not abandon their magic, and still held on to the traditional gods and myths.

There were three categories of magic: destructive, productive and defensive. Destructive magic was practised against foreign enemies in the temples of the country and not inside private homes.

Productive magic was practised to improve business or crops. Defensive magic was the most common form, and mostly practised inside or around the household.

We may take it that every household had its own set of spells and magical objects for the protection of the house and its inhabitants. Simply saying the words of a spell was not enough; it had to be accompanied by objects and hand gestures or actions forming a ritual.

For the Egyptians, magic was not irrational or inferior; it was accepted completely and even admired. In Egypt, practising magic was not the exception, but the rule.

Research into the Amarna Period has tended to place too much emphasis on the aberrant character of the period, and too little attention on the ‘normal’ aspects.

It is generally known that the gods Bes and Taweret were still accepted in the workmen’s village. But if we look closer there are many more gods still visible in the village, such as Hathor, Seth, Wepwawet and even Amun.

These figurines were connected to the Osirian funerary tradition; the deceased was judged by Osiris and accepted into the afterlife through him. The presence of these ushabtis in private tombs seems to indicate that people were not willing to jeopardise their afterlife by renouncing the traditional burial customs.

In one of the royal tombs a ring was found; on top it shows a frog but on the underside it shows the name of Mut, the Goddess of the Sky, Protector of the Dead and consort of Amun. This may indicate that even within royal circles there was resistance to the king’s religious revolution.

It is therefore very likely that the average Egyptian did not renounce the traditional gods and myths; they continued to worship them and to practise magic, although no longer in public, but in the secrecy of their own home.

The distinction between religious and magical artefacts is often difficult to make, and we have to keep in mind that an artefact always has elements of both aspects.

We have to consider the intention of the user in order to decide whether an object was “more magical” or “more religious”. If the goal of the user was to achieve a certain personal goal for him or her, then the object is more magical.

On the other hand, an object should be seen as being more religious if the object was used to communicate with and venerate the gods.

In Anna Stevens’ book “Private religion at Amarna” she presents a collection of all the religious objects found in the city of Amarna, including magical objects from the workmen’s village which provide evidence for the continued practice of magic.

The following artefacts are the most interesting and remarkable within Stevens’ collection, but it must be kept in mind that they are only a small portion of the material evidence.

Amulets were a necessity in Egypt. Even the poorest Egyptians wore (self-made) amulets. The most commonly represented gods were Bes and Taweret who each had strong protective powers over pregnant women, babies and young children.

But the most frequently found amulet is the “wadjet-eye“, also known as the ‘moon eye’ or the ‘eye of Horus’. More than five hundred examples of this amulet were found at Amarna, suggesting a strong dedication to the god Horus in the city.

Within this group there is one peculiar set of models that invokes the traditional gods. Over two hundred figures of women (often accompanied by small children) have been found.

These figures were placed inside the household and used to appeal to the gods or divine ancestors to grant fertility to a woman or couple. These figures could also have been used in many magical spells, such as described in Papyrus Leiden 348: a spell to cure a stomach ache required the spell to be spoken over a clay figure of a woman.

A few statue busts and stelae belonging to private individuals have been found in the workmen’s village. These can be similar in significance to the famous socalled ‘ancestor busts’ from the town of Deir el-Medina (the village for the Valley of the Kings’ workers); within the house they provided a point of contact with deceased and divine ancestors who could mediate between the living and the gods.

The ancestors were known as ‘excellent spirits of Ra’ as they joined Ra in his travels across the heavens. The ancestor busts or stelae worked on the same principle as the ‘letters to the dead’ written by the living to appeal to, or ask a favour from, the dead.

Two stelae dedicated to the god Shed have been found in the village, and this is quite remarkable. This god first appeared in Egypt in the Eighteenth Dynasty, only a few years before the beginning of the Amarna Period.

A strong protective deity, Shed was associated, and often identified, with ‘Horus the Savior’. Even very new deities were apparently accepted and worshipped in Akhetaten.

There are many artefacts in the Stevens’ book which are categorised as ‘vessels’, but a few of these vessels may have a deeper significance. Some have the shape of a woman, and may have contained mother’s milk, a very popular ingredient for magical spells.

Milk could be used in a sleeping potion for babies, or in ointments for burns, but it was also used in pregnancy tests; the milk of a woman who had given birth to a boy was especially popular.

Two headrests were found in Amarna, one of which was decorated with demons to protect the sleeper at night against the terrors of the underworld.

Wall reliefs were discovered in two houses in the workmen’s village. In ‘Main Street House 3’, three Bes figures appear to be dancing while dancing women and girls are depicted in the house ‘Long Wall Street 10’.

Bes and the act of dancing were connected to protective rites or rituals that could protect women in labour. The rooms in which these scenes were found are most likely birth rooms or rooms where a woman and child could reside in the fourteen days after birth, a period where both mother and child were considered impure.

These decorations show that people in the workmen’s village even depicted gods and traditional rituals on their walls.

Ancient Egyptian magic was different. Magic was not irrational; it was a means of protection and a way to control one’s environment. It was practised by everybody throughout the Pharaonic era and was considered a normal, and even desired, activity.

In the Amarna Period; although the traditional myths and gods were banished from official religion, and magic no longer practised in the large temples, magic itself did not disappear entirely because the ordinary ancient Egyptian was completely dependent on magic for protection.

The gods Bes and Taweret were still abundantly present in Amarna, but other gods such as Hathor, Wepwawet, Shed and even Amun were also present.

The religious diffusion within the city of Amarna was shallow at best; only the royal family and highest members of court would have fully accepted the Aten-religion.

It was a religion meant ‘for the inaugurated’, as C. Tietze so eloquently puts it in his beautiful book Amarna: Lebensräume – Lebensbilder – Weltbilder (Potsdam 2008). Although no longer practised publically, magic continued to thrive in the privacy and protection of the household.

Source:Bianca Pesch
Bianca is a museum guide at the National Museum of Antiquities in Leiden, in the Netherlands.

Ancient Egypt: The power of images