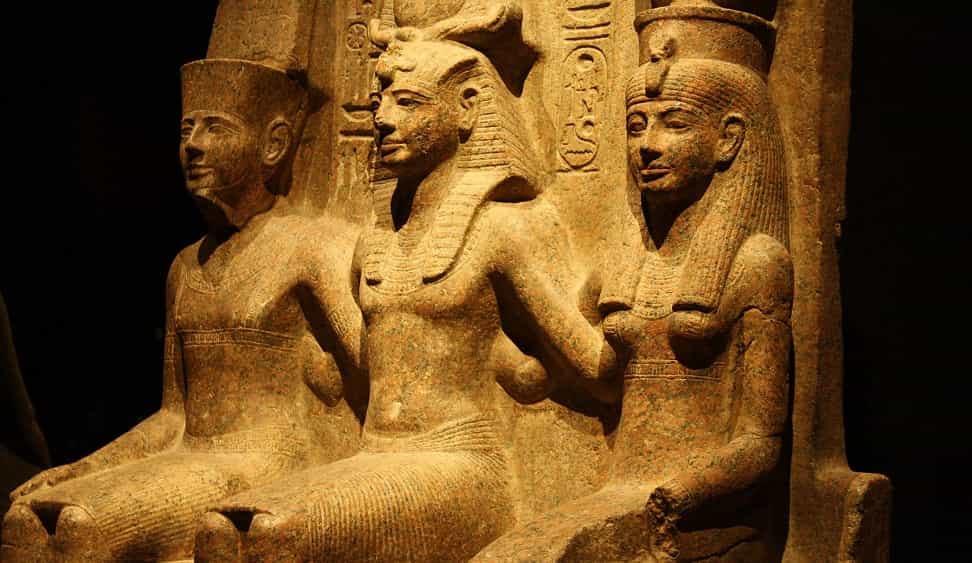 God Amun. Amun is traditionally linked to the hidden, that which is everywhere but cannot be seen, only felt. From this conception derives his connection with the air and the wind that surround everything.

This attribution to the figure of the god did not remain static throughout historical development but underwent important variations, this deity being linked to the primitive abyss and creative power.

At first, when his veneration centered on the city of Thebes, he was assumed to be the son of Maat and Thoth as well as the husband of Mut and the father of Khonsu, forming with these last two divinities the so-called Theban triad in which he used to concentrate his worship.

With the passage of time and especially during the Twelfth Dynasty, his figure became increasingly important, displacing the warrior god Montu as the patron of the province of Thebes.

His climax will come after the defeat of the Hyksos by the Theban princes, at which time he will be proclaimed as the main god of the Egyptian pantheon, becoming identified with the figure of the pharaoh and with his power.

It is in this context that he begins to identify with the deity of the city of Heliopolis, the god Ra, forming the combine of Amun-Ra and granting him the creative and generating power of everything that exists, including the rest of the gods.

The cult of Amun is originally from Thebes but over time it became popular, spreading throughout Upper and Lower Egypt.

It is in this city where its two main sanctuaries are located, that of Karnak and that of Luxor, although others of a more secondary nature such as Debod also stand out.

As with the rest of the gods that made up the Egyptian pantheon, the cult of Amun was carried out daily in all the temples that were dedicated to him.

It was about satisfying the needs of the god as if he was human, for which the priestly community washed their figures, scented them, provided them with food, took them out in procession …

In the case of Amun these rites were developed wrapped in great secrecy and in the context of the Theban triad. His religious community, in charge of the maintenance of these rites, came to amass enormous power.

Festivals related to the cult of Amun

Throughout the year, two festivals related to the cult of Amun stood out: Opet and Beautiful Festival of the Valley, or “heb nefer en inet in Egyptian”.

They were processions in which the figure of the god left his sanctuary to visit other gods and bless their lands.

In the case of Opet it was about the transfer of the figure of Amun from the temple of Karnak to that of Luxor through the avenue of sphinxes that united them, during the Beautiful Festival of the Valley more or less the same happened but in this case the figure Amun of Karnak was moving to the Deir el-Bahari complex.

This was because, depending on the area, the figure of Amun could have a significantly different name as well as its own iconography and mystical attributions.

The cult of this divinity was very long in time with the exception of the interruption that occurred during the reign of the pharaoh Akhenaten.

With the arrival of the Ptolemies to power, they respected the traditions until during the reign of Ptolemy IX, the city of Thebes was sacked due to a nationalist revolt and the cult of Isis and Osiris began to gain greater importance, as can be seen in the evolution of the temple of Debod.

Amun can appear represented in an anthropomorphic way, the most common is to see him with a blue or black face.

Sometimes it is possible to see him represented in that human form with the head of a ram with a tiara around his head that serve as the basis for two long falcon feathers.

At other times he takes on a mummiform appearance. As for his animal representation, he does so in the form of a ram, with one or four heads. It can also take the form of a goose or snake, lion or bull, although the latter are not very frequent.

The mysterious Serapeum of Saqqara, the necropolis of the sacred bulls