Home / Eye of Horus: The True Meaning of an Ancient, Powerful Symbol

Eye of Horus: The True Meaning of an Ancient, Powerful Symbol 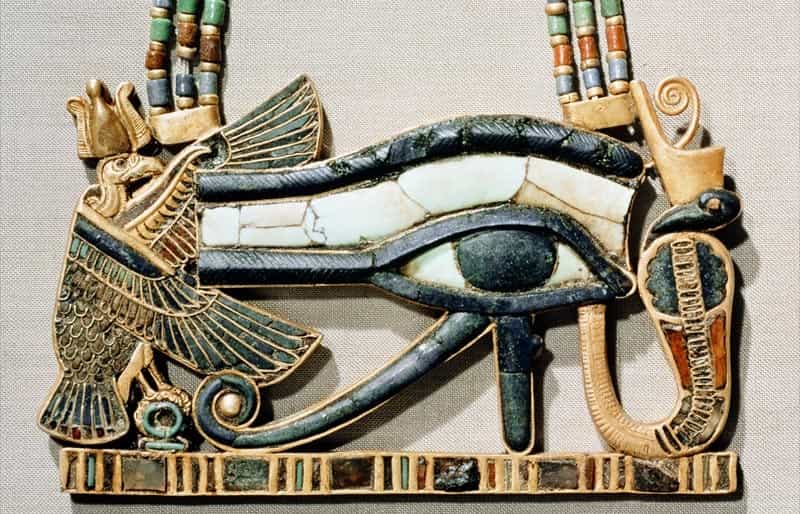 Certain mythological struggles between the god Horus and his uncle Seth made the eye of Horus symbolize the whole, that which has returned to its being and has been completed.

The ancient Egyptians called it Udjat, wadjet or wedjat. This narration tells how Horus had to fight fiercely with his uncle Seth to avenge the death of his father Osiris.

In the battle Horus lost his left eye, which was damaged or stolen by Seth, having to be replaced by the Udjat.

Eye of Horus meaning: Horus’s left eye was related to the Moon, while his right eye was identified with the sun.

The connection point between the Udjat and the Moon is due to a version of the myth that tells that the injured eye had to be healed and rebuilt by the god Thoth.

The healing process was perceived in nature through the lunar phases, that is, the Moon modified its appearance when it was in a trance of healing and the Full Moon appeared when the Eye of Horus was completely healed.

The connection between solar and osiriac myths that is perceived in this legend seems to indicate that the ancient Egyptians themselves merged stories that belonged to different deities, Horus the Elder (Haroeris) and Horus the Younger (the son of Osiris and Isis) and that in the end the Eye served as a model of the offering that Horus the Younger made to his own father to bring him back to life.

That is, Horus the Younger came to merge with his counterpart when the Osiris myth began to gain importance.

In the form of an amulet, it was one of the most powerful and important and the amount of copies that were taken or included in the mummy increased its protective value.

It served to counteract the effects of the evil eye, as a remedy against eye diseases and to protect the deceased from any harmful enchantment or bad luck, enhancing the vision, both real and introspective.

It appears in a multitude of contexts; for example, on the walls of the temples the offering of two Eyes of Horus is collected to ensure the proper functioning of the solar and lunar cycle.

The same symbolism had the presentation of two mirrors. Also in the sanctuary the Udjat is personified in the lock of the naos of divinity.

The part where the latch came in was called this way and the latch itself was “Seth’s finger” evoking again the problems between the two gods; the return of Maat (order), personified by the god of the temple, stabilized the cosmos agitated by this struggle.

The Udjat is found in the funeral trousseau, forming part of the decoration or even integrated into the ornamentation of scepters, bows of boats, etc.

With the inclusion of the eye the object was animated and magically empowered to have the power to see.

The Eye of Horus was considered the offering par excellence. In Hornung’s opinion (1992), it could be put in parallel with Maat‘s offering, since with both the dangerous and harmful threats were managed to be removed, ensuring that justice and harmony remained or returned.

These two offerings were presented side by side in ceremonies such as the “Daily Worship”.

A statuette represented the goddess of justice and cosmic order, Maat, who carried an ostrich feather on her head as a distinctive symbol.

She was the generic food of God, since it was based on justice, strengthening with the “spirit” of this concept that empowered the good progress of the country.

On the other hand, the Eye of Horus symbolized health, another of the essential elements for the maintenance of the Maat.

Thanks to these offerings the magic and powerful “life” necessary for the harmony of the Egyptian land was breathed into the statue.

Some gods like Iah (the Moon) or Nefertum in their aspect of “Sovereign of Food” (New Kingdom) frequently carry this organ in their hands as a symbol of every offering.

That is, it came to personify not only concepts related to light, but it could also be, for example, the magical materialization of food. Represented on the side of the sarcophagus served so that the deceased could see through them the trip he made through the sky, including at the end of the third millennium.