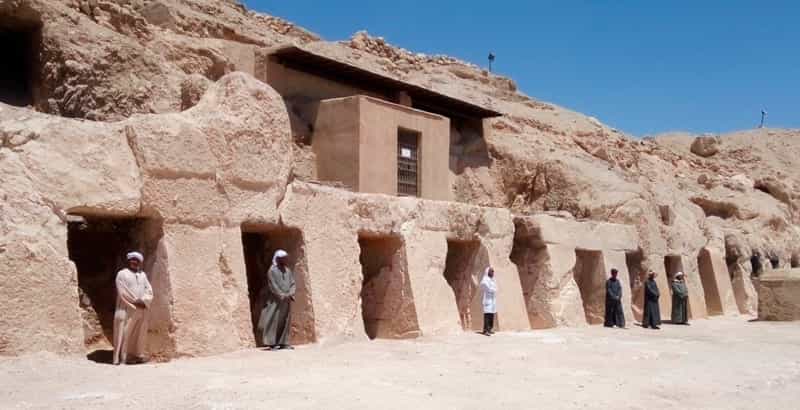 A team of archaeologists found on the Dra Abu el Naga hill in Luxor, Egypt, a large tomb that belonged to a pharaonic nobleman. This grand 18-door treasure is over 3,500 years old and measures 450 square meters.

Archaeologists discovered that this tomb was built as a resting place for the noble Shedsu-Djehuty.

This character in history held various important positions, among them the mayor of Thebes and bearer of the royal seal of Upper Egypt. This could be known thanks to the fact that his name and titles were inscribed at the entrance of the tomb.

On the other hand, the interior walls were decorated with some scenes that show the deceased before the gods. In addition, they found paintings that reflected the activities of daily life, of that time, on the banks of the Nile River. Some examples are hunting, fishing and the manufacture of wooden boats.

Finally, they found a large collection of Ushabtis, which were placed at the tomb of the deceased to accompany him in the afterlife.

“This tomb is L-shaped, with an initial corridor that leads to an antechamber and from there to the burial chamber,” explained Mohamed Megahed, head of the archaeological team. They also found a huge patio decorated with colorful tiles.

The garden presented the peculiarity of keeping in good condition the seeds that were sown more than three thousand years ago.

“This find provides a new understanding of the architecture and design of individual tombs in this region of ancient Egypt,” explained Dr. Mustafa Waziri, Secretary General of the Supreme Council of Antiquities.

This is the largest “saff” tomb, due to its large dimensions and 18 doors, discovered in the necropolis of Thebes.

A “saff” (“row” in Arabic) tomb is a type of burial in rock that became popular in the area of ​​Thebes until the 11th Dynasty of Ancient Egypt, from Dendera to Gebelein.