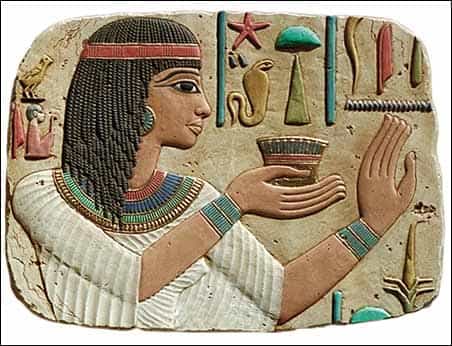 The ancient Egyptians were truly advanced in medicine and had developed a series of preparations made with herbs and plants to cure different ailments. The ingredients of these Egyptian natural remedies spread to the rest of the world and are now part of culinary ingredients.

These herbs and plants are considered “healthy foods”, although they are not effective for acute illnesses, they are safe to consume. Today much of the elements that the Egyptians used to treat their ailments are known as homeopathic remedies.

Honey: the ancient Egyptians used honey to treat various conditions, especially infections. In the engravings of temples, sarcophagi and obelisks, the importance of this food in daily life was confirmed, even in the Ebers Papyrus its medicinal value is mentioned. In Egypt almost the medicines had honey, wine and milk.

Honey for its antiseptic and anti-fungal properties, the Egyptians used it to soothe irritated skin, wound healing and infections.

The use of honey is described in the Edwin Smith Papyrus and details that it has saved countless lives from the deadly infections of pyramid workers where they suffered scrapes, wounds and cuts.

Acacia: Currently, chewing gums derived from acacia are made and are used for diseases of the intestinal and urinary tract. In ancient times the Egyptians boiled acacia and got a mucilage that they took to soften the digestive tract, especially in cases of gastritis and ulcers.

Coriander: The seeds and the plant were commonly used by the ancient Egyptians, the grains were found in ancient tombs and were the first herbs mentioned in the scriptures.

This herb has pain relieving properties and is useful for headaches, muscle pain and stiffness, arthritis, and inflammatory diseases.

The essential oil was used to eliminate toxins and stimulate circulation, applied topically relieves muscle aches and stiffness in extremities such as joints.

Its seeds are used to soothe ulcers in the mouth, they are made into a paste and applied directly to the lesion.

Fenugreek: Currently in Egypt it is called Helba and it is a plant that Hippocrates mentioned, it is also one of the old ones in ancient Egypt.

They used it to facilitate childbirth and to increase the flow of milk, when it is ingested after three days, breast milk increases considerably.

Egyptian women used it to relieve menstrual pain and genital problems, as well as it is effective for male impotence.