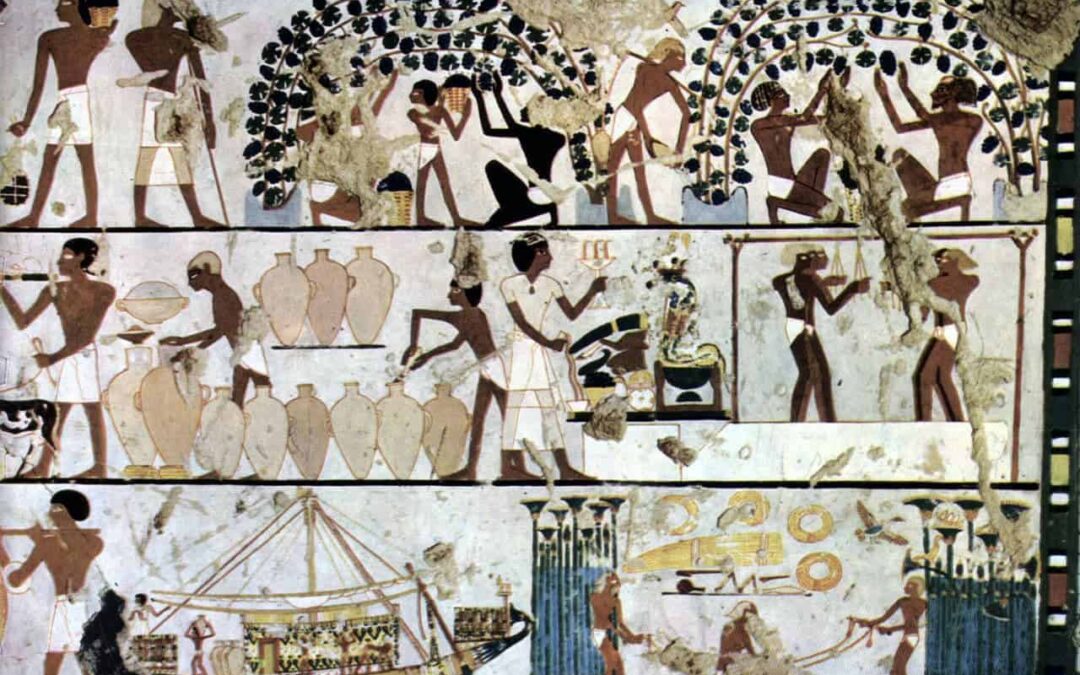 Obviously it was not the ancient Egyptians who invented wine. Archaeologists have located the beginnings of its elaboration in an extensive area south of the Caucasus, between present-day Georgia, Turkey, Armenia and Iran, between 8000 and 5000 BC.

During the Bronze Age, both the cultivation of grapes and the production of wine spread throughout Asia and Europe, reaching China and the Iberian Peninsula, where the Phoenicians found vineyards on their arrival. And of course the new drink was incorporated into commerce and trade routes throughout the ancient world.

A whole wine industry emerged in Egypt from the 27th century BC, probably imported from Canaan, during the Third Dynasty.

The ancient Egyptians controlled the wine routes between 1550 and 1070 BC. In order to transport and preserve the wine safely, they introduced for the first time standardized amphorae sealed with reed and mud joints and covered with tar inside, which prevented it from spoiling on the way long.

Some of these amphoras, still with wine, were found in the tomb of Tutankhamun.

The ancient Egyptian preferably consumed beer, the wine being reserved for the pharaoh, the priests and the upper classes, except on designated dates, such as the festivals of the goddess of the grape harvest, Renenutet, or that of Hathor.

According to Plutarch, the ancient Egyptians thought that wine was:

“the blood of those who had once fought against the gods, and of whom, when they fell and mingled with the Earth, believed that the vines had sprouted. This is the reason why drunkenness makes men lose their senses and drive them crazy, since then they are filled with the blood of their ancestors” (Plutarch, Of Isis and Osiris 6).

With the wine trade, marking also emerged, which in principle only identified the content of the amphorae. Thus, the oldest is a Babylonian cylinder seal from about 6,000 years ago, which was used to stamp the amphoras indicating that they contained wine (and that it represents a group of people in a happy attitude, how could it be otherwise).

But the ancient Egyptians added a whole series of information to these brands, creating what are considered to be the oldest known wine labels.

The labeling of the amphoras was done directly on the wet clay, or ostraca (limestone, earthenware or handwritten ceramics) were used.

They included one or more of the following data:

Interestingly, from the amphorae with wine found in the tomb of Tutankhamun, the researchers were able to verify that the Egyptians kept a record of the years with the best harvests, since only wine from certain specific years was buried with the Pharaoh.

They also appreciated vintage wines, as the contents of some amphoras were 200 years old at the time they were deposited as funerary offerings in graves.

The colossal statue of Ramesses II