Home / The Bent Pyramid of Sneferu: A Change in Design? 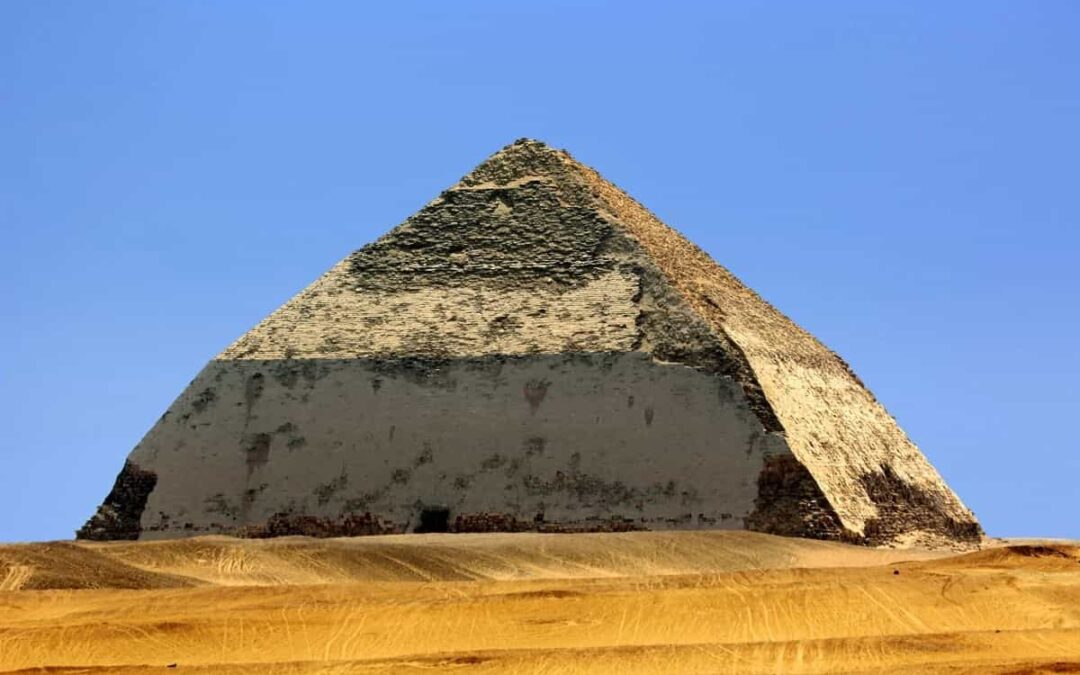 The Bent Pyramid or the South Pyramid of Dahshur, it is a funerary monument built by order of King Sneferu in Dahshur, 40 kilometers south of Cairo, Egypt.

Its particular shape is believed to be a failed attempt at a smooth-faced pyramid, the last phase in the evolution of the Egyptian pyramids.

It has many peculiarities and resembles in many points the pyramid erected by Sneferu’s son and successor, Khufu. Among its characteristics stands out the fact that one of its two entrances is not located on the northern facade, a unique fact in the Old Kingdom.

Also noteworthy is the fact that the pyramid still preserves most of its coating, which makes it the pyramid that is currently the best preserved in all of Egypt and what made it known as it who shines in the sun.

Inside there is a false vault supported by the four walls, which is the oldest known. The funerary complex reveals vestiges of an imposing temple whose rich ornamentation distinguishes it from other monuments of the Fourth Dynasty.

The funerary complex is made up of the pharaoh’s pyramid and a 26 m high satellite pyramid located to the south, both surrounded by a 2 m high stone wall.

This enclosure was connected to a funerary temple by a road of about 700 m in length. Due to its position remote from the valley entrance, this funerary temple does not appear to be the receiving temple (or valley temple).

On the other hand, there are vestiges of a second road that was to connect this temple with the true temple of the valley. It is a peculiarity that cannot be found in any other pyramid complex.

Orientation : facades to the four cardinal points, with an approximate error of 9’12”.

The most obvious characteristic of the pyramid is the unique appearance of its faces: with a double slope. It is estimated to be the result of a planning change that occurred during construction.

The second characteristic is the doubling of its internal distribution: two burial chambers accessible through two entrances, one located on the northern face, about 12 m from the ground, and the other on the western side, 33 m from the ground (the pyramid of Khafre has also two entrances, but both are located on the northern side of the monument).

“Archaeologists now believe that the Bent Pyramid represents a transitional form between step-sided and smooth-sided pyramids.

It has been suggested that due to the steepness of the original angle of inclination the structure may have begun to show signs of instability during construction, forcing the builders to adopt a shallower angle to avert the structure’s collapse.

This theory appears to be borne out by the fact that the adjacent Red Pyramid, built immediately afterwards by the same pharaoh, was constructed at an angle of 43 degrees from its base.

This fact also contradicts the theory that at the initial angle the construction would take too long because Sneferu’s death was nearing, so the builders changed the angle to complete the construction in time.

In 1974, Kurt Mendelssohn suggested the change of the angle to have been made as a security precaution in reaction to a catastrophic collapse of the Meidum Pyramid while it was still under construction.

The reason why Sneferu abandoned the Meidum Pyramid and its Step Pyramid may have been a change in ideology. The royal tomb was no longer considered as a staircase to the stars; instead, it was served as a symbol of the solar cult and of the primeval mound from which all life sprang.

It is also unique amongst the approximately ninety pyramids to be found in Egypt, in that its original polished limestone outer casing remains largely intact.

British structural engineer Peter James attributes this to larger clearances between the parts of the casing than used in later pyramids; these imperfections would work as expansion joints and prevent the successive destruction of the outer casing by thermal expansion.

The ancient formal name of the Bent Pyramid is generally translated as (The)-Southern-Shining-Pyramid, or Sneferu-(is)-Shining-in-the-South.

In July 2019, Egypt decided to open the Bent Pyramid for tourism for the first time since 1965.

Tourists are able to reach two 4600-year-old chambers through a 79-metre narrow tunnel built from the northern entrance of the pyramid.

The 18-metre-high “side pyramid”, which is assumed to have been built for Sneferu’s wife Hetepheres will also be accessible. It is the first time this adjacent pyramid has been opened to the public since its excavation in 1956.”