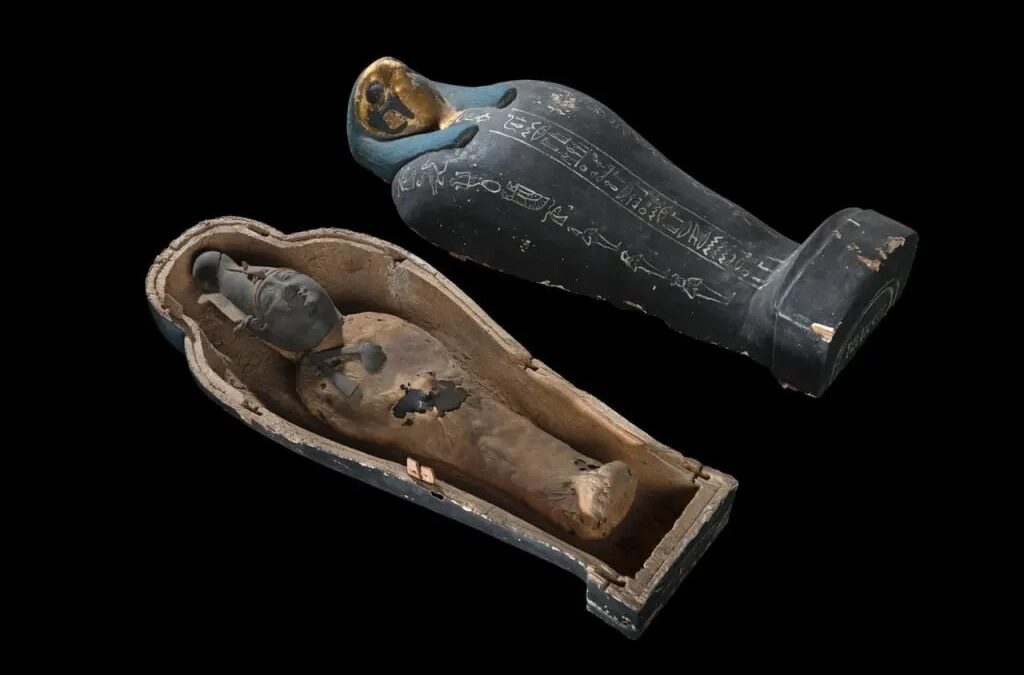 The Corn Mummy of Osiris is a unique artifact from ancient Egypt that symbolizes the god of resurrection and life-giving forces of nature.

This falcon-headed coffin does not contain an actual mummy, but instead is filled with grains like corn and sand. The falcon head on the coffin and hieroglyphic text on the painted lid indicate its association with the funerary deity Ptah-Sokar-Osiris.

During the mysteries, two statuettes of Osiris were created: one made of silt and grains that were meant to germinate, symbolizing the rebirth of nature, and the other made of silt, resins, and ground precious stones.

Both statuettes were wrapped according to ritual and placed in a temporary tomb before being moved to a permanent one at the end of the following year’s mysteries.

Osiris was closely connected with the Nile and vegetation, particularly germinating grain. The Egyptians believed that the emergence of a living, growing plant from a dormant seed was a metaphor for the rebirth of a human being from a lifeless corpse.

This concept was translated into physical form through the creation of “corn-mummies” made of sand or mud mixed with grains of barley.

In the case of this artifact, the “mummy” is wrapped in linen bandages and may possess a finely detailed mask of wax, representing the face of Osiris. It is believed to have been created during the Third Intermediate Period, between the 21st and 25th dynasties, and is currently housed in the Egyptian Museum in Cairo.

Osiris, a prominent god in ancient Egyptian mythology, was considered the ruler of the underworld and the afterlife. He was the firstborn son of Geb, the god of the Earth, and Nut, the goddess of the sky. His wife and sister, Isis, was a goddess of motherhood, magic, fertility, death, healing, and rebirth.

According to myth, Osiris and Isis were deeply in love with each other even before they were born. In the New Kingdom, he was seen as the master of the afterlife and the ruler of the underworld.

Before becoming the lord of the afterlife, Osiris was said to have ruled ancient Egypt and taught its people about agriculture and civilization. However, his brother Seth was incredibly jealous of him and ultimately killed Osiris, cutting his body into pieces and distributing them throughout the land.

With Osiris dead, Seth became the king of Egypt with his sister Nephthys as his wife. Nephthys, feeling sorry for her sister Isis, who was grieving for her lost husband, helped her in her quest to bring Osiris back to life.

Using her powerful magic, Isis traveled the country collecting the pieces of her husband’s body and reassembled them, holding them together with linen wrappings. She then breathed life back into him and brought him back to life, long enough for them to conceive a child, Horus.

After his resurrection, Osiris descended into the underworld and became the lord of that domain. He was considered the judge of the dead and was believed to determine the fate of souls in the afterlife.