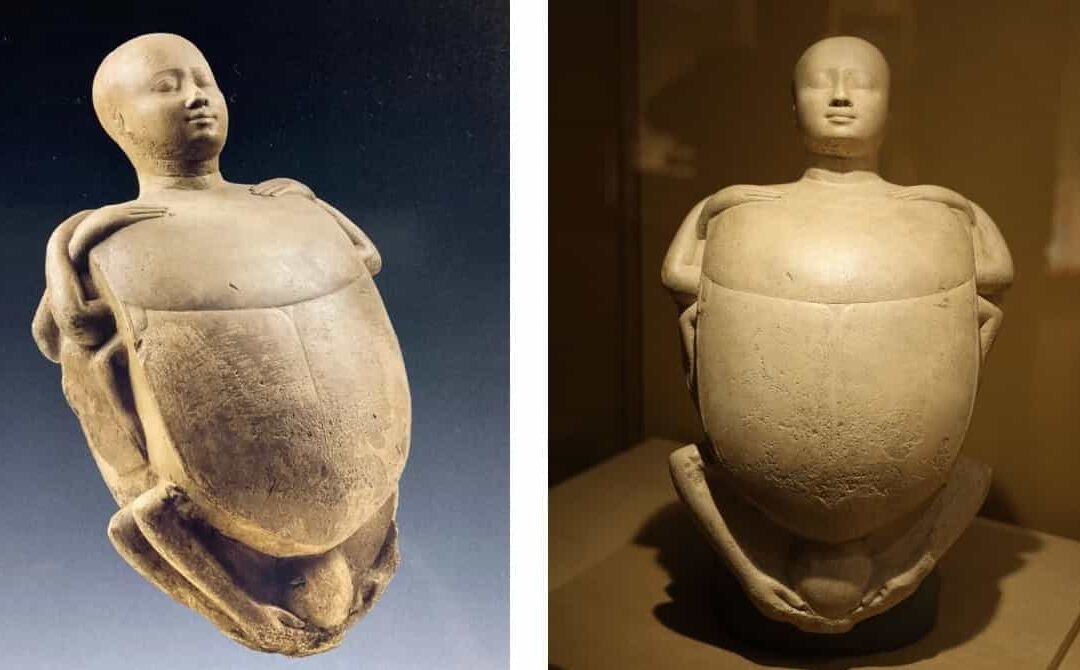 The Khepri Scarab Amulet is a unique and rare figure depicting the ancient Egyptian god Khepri in the form of a scarab beetle with a human head and arms emerging from its exoskeleton.

In ancient Egyptian culture, scarab beetles were believed to have protective powers and were often used in the form of amulets, known as heart scarabs, to protect the hearts of the deceased in the afterlife.

The significance of the scarab beetle in ancient Egyptian iconography is due to its shape, which provided an ideal surface for engraving inscriptions, as well as its natural behavior.

The scarab beetle’s habit of pushing a ball of dung, its food source, to an underground hiding place was seen as corresponding to the daily path of the sun in the sky, making it a symbol of regeneration and resurrection.

Scarab amulets were widely used throughout Egyptian history, from the First Intermediate Period to the Roman Period, and were made in a variety of materials. They were used by both the living and the deceased, and could be as small as a few centimeters or as large as 10 cm.

This particular humanoid scarab amulet is believed to date back to the Late Period, around 664-332 BC, and is currently housed in the Egyptian Museum of Berlin. It is known as ÄM 11405.

Khepri is a well-known god in ancient Egyptian mythology, known for his scarab beetle shape. The ancient Egyptians believed that Khepri had protective powers and his cult was popular among them in the form of an amulet.

Khepri’s main function was to bring the sun up every morning. The divinity was associated with the dung beetle, which lays its eggs in a ball of dung that it pushes until the larvae hatch.

In the same way, the ancient Egyptians, who closely observed nature, believed that the sun rose every day because Khepri pushed the ball that was the sun through the body of Nut, the goddess of the sky and celestial vault, until it appeared on the eastern horizon, thus marking the start of a new day. This is why his name means “come into being”.

As the god of the rising sun, Khepri was one of the three forms that the solar divinity took: Khepri in the morning, Ra at noon, and Atum at sunset.

Due to his association with rebirth and transformation, Khepri is often represented in tombs as a reminder of the afterlife. He is commonly depicted as a man with the head of a beetle, holding a scepter and an ankh, the “key of life.” This can be seen in temples, statues, obelisks, and tombs, reminding people of the promise of new life in the afterlife.