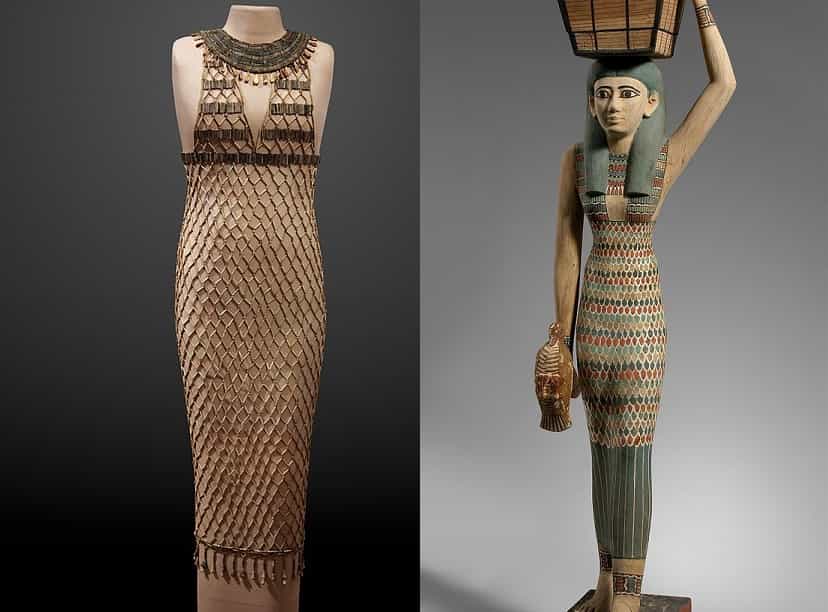 “Tell me how you dress and I will tell you who you are” is a universal phrase that can be applied to any civilization in any spatial and temporal context, and the ancient Egyptians are no exception: the clothes they wore were a symbol of their social status.

In the Old Kingdom, clothing was limited to a skirt, a simple rectangular piece of linen that was wrapped around the body to cover from the waist to the knees.

But high officials, nobles and royalty wore a different type of kilt, although it did not evolve much from the typical short loincloth with the ends crossed and knotted at the hip.

As in the whole world, women’s fashion did evolve much more than men’s over time, while for men the kilt became a kind of what for us today would be a white shirt: classic, sober and indispensable in every wardrobe.

The leopard skin also appears in some visuals from the Old Kingdom onwards. It is believed that they were generally used by priests and pharaohs.

During the New Kingdom there was a refinement in both men’s and women’s clothing.

The rich and courtiers manifested themselves through luxuries and grand celebrations, and fashion, which was meant to express opulence, evolved from simple white dresses with straps to exquisite pleated dresses of soft, transparent fabrics that highlighted female bodies.

The traditional kilt was added to the shirt and accessories such as elaborate necklaces, belts, jewelry, earrings, bracelets, pectorals, sandals, etc. and without forgetting the wig: an attribute of the upper classes par excellence.

It was common for the ancient Egyptians to shave their heads for hygiene and health reasons, so they opted for delicate and elegant wigs, on which they placed perfumers, another symbol of sophistication.

These consisted of cones of scented resin that melted with the heat on the wig and sometimes on the clothes, since in some paintings you can see the dresses stained yellow by the perfume.

Remember that Egypt has hot summers and mild winters. This favored clothing made from plant fibers. Cotton came later with the Romans and wool was hardly used.