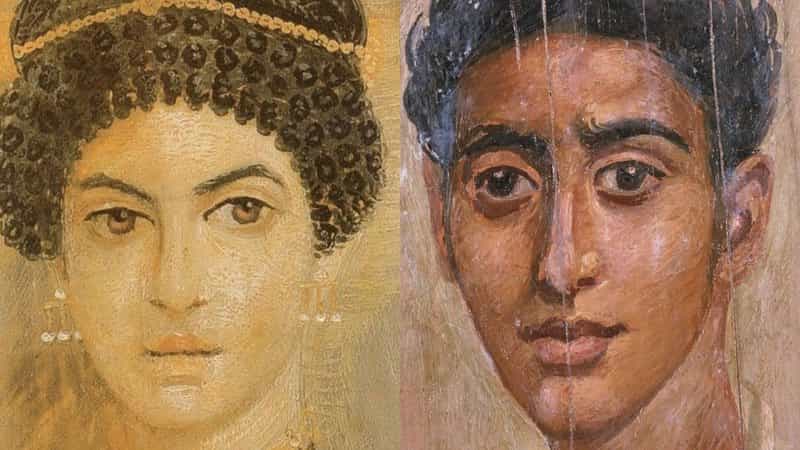 The best-preserved paintings of antiquity are a realistic image of Ancient Egypt.

They stare at you and seem to observe everything insistently. The Egyptian paintings known as the Fayum Portraits show ordinary people, probably upper-middle class.

They belong to the end of the Ptolemaic period and the beginning of Roman rule, which began in 30 BC with the defeat of Cleopatra and Mark Antony. The Greek Ptolemaic dynasty was founded by a general of Alexander in 301 BC, Cleopatra was the last Ptolemaic queen.

The first portraits were found in the 19th century, in the city of Fayum, 130 kilometers from Cairo. Later, they were also discovered in nearby locations, such as Memphis and Thebes.

They were painted between the 1st and 4th centuries BC. The style is typically Greco-Roman, although Egyptian tradition can be seen on the sarcophagi.

The Greeks intervened a lot in Egyptian religion. Anubis and Isis were still celebrated — and the latter was even adopted in Rome.

Egyptians continued to make mummies until the 4th century, and there are even Christian mummies.

The paintings were made on wood or pieces of linen, using wax, water and egg white mixed with pigments. They were almost certainly made when people were still alive, with the aim of being placed over the sarcophagus, to show what the dead looked like.

This emulated the way the ancient pharaohs had their faces carved into the sarcophagus, but at a much cheaper rate.

There is evidence that the paintings, before ending up in the tomb, were part of the decoration of the home of the portrayed.

Things like irregularities that prevented the sarcophagi from fitting snugly and age differences between the person depicted and the mummified person.

Naturalists, portraits always show people from the front. Ancient Egyptians believed that it was necessary to help the gods identify them in the afterlife.

Hence the faces on sarcophagi and the paintings and texts on tombs, traditions that date back 2500 years before these portraits.

The Fayum Portraits are considered to be the best preserved works of antiquity. There are around 900 examples, displayed in museums around the world, such as the Louvre Museum in Paris, the British Museum in London and the Metropolitan Museum of Art in New York.

The Sandals of Ancient Egypt