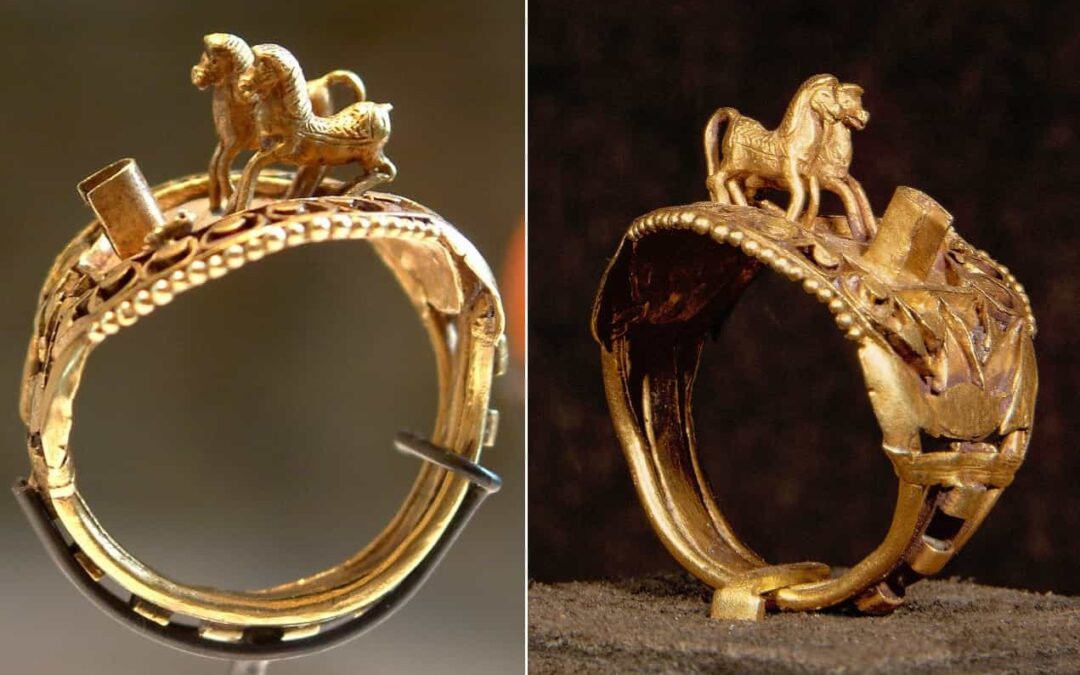 The Horse Ring of Ramses II, also known as the Ring with Horses, is dated approximately between 1279 and 1213 BC. It belongs to ancient Egyptian art.

In 1827, the ring was given to King Charles X of France (King of France and Navarre) by the wali (governor) of Egypt, Muhammad Ali Pasha.

From that year onwards, it became part of the Louvre Museum in Paris, forming part of its Egyptian antiquities collection.

Who was Ramses II?

Ramses II, also known as Ramesses the Great (1,303 BC– 1,213 BC), was the third pharaoh of the Nineteenth Dynasty of ancient Egypt, belonging to Egypt’s New Kingdom period.

His reign lasted 66 years, and he stands out for the numerous works of construction he carried out. Ramses II ordered the extension of the temples and the construction of others; one of the most famous is the “temple of Abu Simbel.”

It is made of gold, lapis lazuli, and carnelian (a reddish-brown mineral used as a semi-precious gem).

This ring is a piece of gold work commissioned by Pharaoh Ramses II to commemorate the braveness of his two mares in the Battle of Kadesh.

The ring is decorated with notches and reliefs.

Two mares are represented in the upper part, and the edges are decorated with a row of golden pearls on both sides of the mares.

The ring commemorates or symbolizes the moment during the Battle of Kadesh when the two mares (“Mut is Satisfied” and “Victory at Thebes”) saved the pharaoh.

Finally, it should be noted that the Battle of Kadesh against the Hittites ended with a peace treaty, thus ending the centuries-long enmity between the ancient Egyptians and the Hittites.

It is currently located in the Louvre Museum in Paris, France.

The Secret Passageway that Could Lead to Cleopatra's Tomb