The Karnak Temple Complex in Egypt 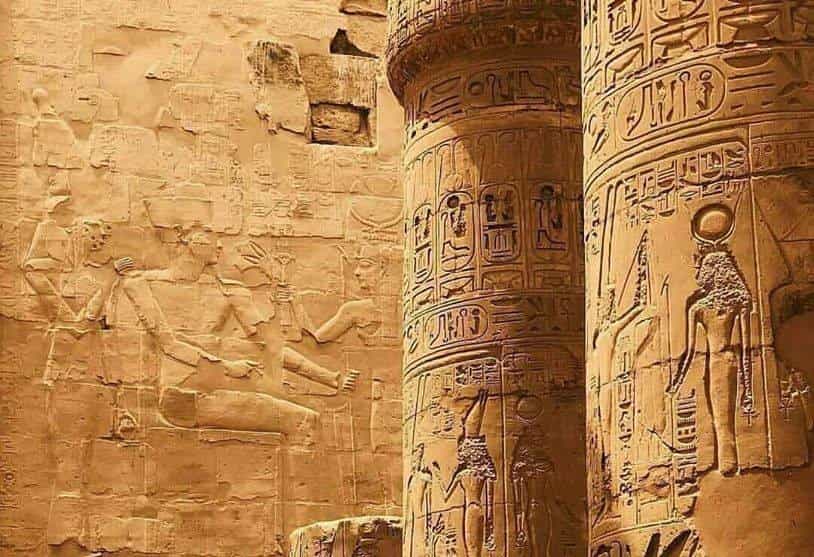 Karnak called in Ancient Egypt “Ipet sut”, “the most revered place” is a small town in Egypt , located on the eastern bank of the Nile River , next to Luxor. It was the area of ​​ancient Thebes that housed the most important religious complex in Ancient Egypt.

It is part of the complex called Ancient Thebes with its necropolis , declared a World Heritage Site by Unesco in 1979 . It is the largest set of temples in Egypt.

For centuries, this place was the most influential Egyptian religious center. The main temple was dedicated to the worship of the god Amun, but as in other ancient Egyptian temples, other deities were also venerated.

The Karnak temple complex is made up of:

There is also a sacred lake, numerous smaller shrines and chapels, and multiple rooms and warehouses located within the walls that surrounded the main enclosure.

The main difference between the temple of Amun at Karnak, which Diodorus Siculus claims to be the oldest in Thebes, and most Egyptian temples is the time and effort spent on its construction and later extensions.

About thirty pharaohs contributed with their buildings, turning the Karnak into a complex that about thirty hectares.

The entrance, between two immense pylons, is preceded by a dromos (“way of the god”) or avenue of sphinxes , with the head of a ram, symbols of the god Amun.

You enter a large porticoed courtyard where you will find, on the left, a temple of Pharaoh Seti II, one of the columns of Taharqa and the monumental statue of Pinedjem I, on the right the temple of Ramses III, in front, the room hypostyle, and a little further in the background, the obelisks of Thutmose I and Hatshepsut; then there are a series of rooms, with smaller patios, and the sanctuary, to which only the pharaoh and the priests had access.

The hypostyle hall at Karnak is one of the most unique parts of the religious complex. At 23 meters high, it is an architectural space whose roof is supported by 122 gigantic columns that are higher in the two central rows, forming a large corridor, whose arrangement allows lighting from the axis of the room.

The material used was stone, carved into blocks that make up the drums of the columns. These supported on bases and ended in gigantic papyrus and bell-shaped capitals, on which huge lintels were placed that supported a lintel cover.

The shafts of such colossal columns were decorated with polychrome reliefs, in charge of complementing the grandeur of the sacred place.

In ancient Egypt, the construction of the temples always began at the sanctuary, which means that Karnak began in the center and was completed by the entrances to the enclosure. The whole complex was richly decorated and painted in bright colors.

After the pyramids of Giza , Karnak Temple Complex is the second most visited place in Egypt.

One of the most famous sound and light shows in Egypt takes place at the Karnak Temple. The show consists of advancing through the temple while listening to a story and different parts of the temple are illuminated.

From Egypt to New York and London: The journey of Cleopatra's needle (amazing photos)

Djed Pillar, the mysterious symbol that symbolized the backbone of Osiris and provided stability to ancient Egypt