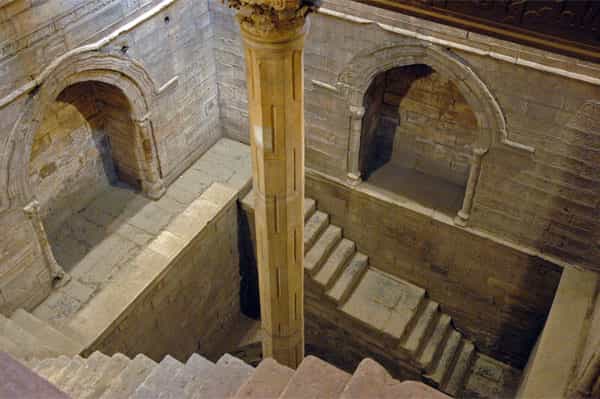 What was a nilometer for?

In addition to the designs of the gods and pharaohs, the Egyptians lived pending another factor that conditioned their existence: the annual floods of the Nile.

To control them to their advantage, they chose to create a system that measured, with a series of marks, the flood levels of the river, the nilometer.

This allowed them to predict the volume of the flood and, therefore, of the harvest: The more irrigation, the more fertile land.

Thus, depending on the agricultural product collected, one or another tax was charged. Nilometers were built as ladders on the banks of the Nile and others of surprising mathematical precision in underground wells, such as the one in Roda.

Nilometer is the name given to stepped constructions or wells, different in terms of their design but with the same function: To measure the level of the waters of the Nile River.

The most famous nilometers are in Elephantine ( Aswan ), Kom Ombo and on the island of Roda ( Cairo ).

The level of the Nile was taken as a reference of the economic situation, to establish taxes and to know how much harvest would be harvested in the cultivated fields.

When the Aswan Dam was built, the water level of the Nile remained constant throughout the year, ending the cycle of floods throughout Egypt.

Importance of the Nile cycle

The flood, called – akhet – in the ancient language of the Egyptians was one of the three seasons in which the ancient Egyptians divided the year.

A level of the waters of the Nile in Elephantine below six meters meant that many fields could not be cultivated and the consequent famine throughout the country.

A level much higher than eight meters caused the flooding of the villages, destroyed the houses and rendered useless the irrigation canals.

“… when the ascent reached twelve cubits, there is hunger, in thirteen there is a shortage; fourteen brings joy; fifteen security and sixteen abundance joy or pleasure.” Pliny the Elder.

Every summer, torrential rains in the highlands caused a drastic increase in the amount of water flowing into the Nile from its tributaries. Between June and September, the Nile overflowed through Egypt, flooding the adjacent plains.

“Now the Nile, when it overflows, floods not only the Delta, but also portions of the country on both sides of its course that are thought to belong to Libya and Arabia and are in some places two days’ travel from their shores.” Herodotus

When the waters receded, around September or October, they deposited a rich alluvial layer of silt that favored the fertility of arable lands.