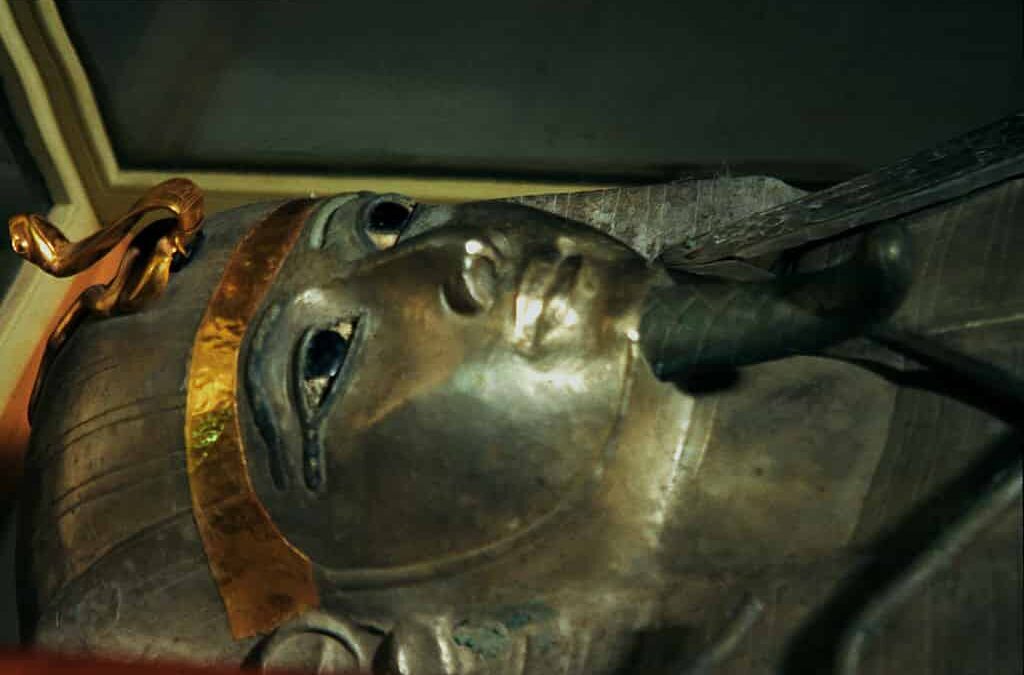 Psusennes I is the third pharaoh of the 21st dynasty of Egypt. He ruled from 1039 to 991 BC, during the Third Intermediate Period of Egypt. His name, Pasebakhaenniut Meryamon, means “The star that appears in the city ( Thebes ), beloved of Amun .”

The precise duration of his reign is unknown since the different copies of Manetho cite Psusennes with a reign of 46 years ( Julius Africanus ) or 41 years ( Eusebius of Caesarea ). Although it is not known for sure, his reign lasted for more than four decades.

According to Kenneth Kitchen, Psusennes I had a co-regency of several years with his son Amenemope, documented in the bandaging of a mummy, now lost, linking “the 10th year of Amenemope to the 49th year of Psusennes I.

The tomb of Psusennes I

Pierre Montet discovered the intact tomb of Psusenes (No. 3) in Tanis in 1940. Due to the high humidity of the place, in Lower Egypt, most of the objects made of organic materials were decomposed.

The red granite outer sarcophagus and the black granite intermediate had been repurposed or usurped. The mummy of Psusennes was inside a third silver coffin, something unusual in ancient Egypt because it had to be imported and it was more scarce and valuable metal than gold.

A cartouche on the outside of the red sarcophagus indicated that it had originally belonged to Pharaoh Merneptah, the successor to Ramses II of the 19th dynasty, from his previous burial in the Valley of the Kings.

Grave robberies were common practice in the Third Intermediate Period and many sarcophagi were left unoccupied.

Douglas Derry, from the department of anatomy at Cairo University, examined his remains in 1940 and noted that Psusennes I had badly decayed teeth, and that the pharaoh suffered from arthritis that probably invalidated him during his later years.

Psusennes I: The silver pharaoh

The discovery of Psusennes I, better known as the Silver Pharaoh, is possibly one of the most important finds in Ancient Egypt. However, he is one of the lesser known pharaohs of that time.

Archaeologists who have analyzed the case, assure that he is a strangely long-lived king, since recent studies of his skeletal remains, concluded that he lived approximately 80 years, at a time when very few lucky ones reached the age of 40.

The finding of the third sarcophagus was unusual, since in Ancient Egypt it was not common for anyone to use silver items, because it was a rare metal, according to information from a study by the German Egyptologist, Jürgen von Beckerath.

Therefore, the discovery revealed the great importance and riches of this pharaoh, comparable to those of Tutankhamun, since necklaces, bracelets, pendants and pectorals of gold and silver were inlaid with stones such as lapis lazuli, carnelian and also vitreous paste of imitation of precious stones.

Gold was commonly used in Egypt due to its abundance, and greater malleability, which facilitates carving. Instead, silver was a much more valuable material than gold because it had to be imported, and its properties made it more difficult to work and carve.

In the report “Tanis and the enigma of the Silver Pharaoh”, details that although silver was scarce in Egypt of the first dynasties, during the New Kingdom trade routes were opened that made it a matter within the reach of goldsmiths of the Country of the Nile, devaluing its price.

However, the sarcophagus of Psusennes I was carved with a precision and delicacy that required many hours of hard work.

That seemed to be the last intention of the old pharaoh. On a symbolic level, gold signified the flesh of the gods. While silver was identified with the bones of the gods.

Queen Tiye: One of the Most Influential Women of Ancient Egypt
Seqenenre Tao, the pharaoh who died in battle