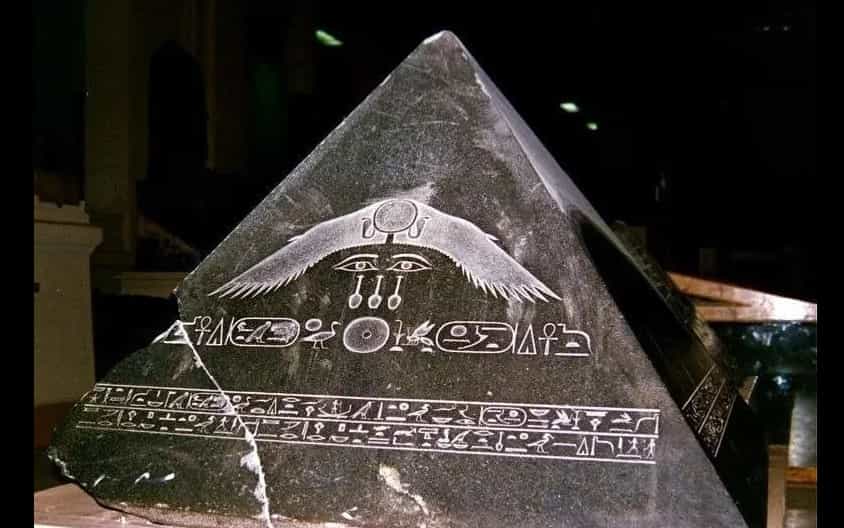 The pyramidion of Amenemhat III is a unique and valuable artifact that was discovered in the late 19th century. This basalt pyramidion was found near the pyramid of Amenemhat III, which had been toppled from its original location. It is relatively well-preserved, with hieroglyphic inscriptions offering the king access to the sun-god.

It weighs around 4.5 tonnes (9,900 lb). The bottom edges are undercut to keep the block in position atop the pyramid.

The four upper faces of the pyramidion are polished and inscribed. The side that points to the east is adorned with a winged sun disk flanked by two uraei. Below this, there are two wedjat that represent the eyes of the king himself.

Further down, there are three nefer signs that stand for beauty or perfection. Finally, there is a sun disk that represents the god Ra. The overall composition reads: “Amenemhat beholds the perfection of Ra”.

Along the bottom of the four upper faces, two lines of inscriptions run. The eastern inscription commences with:

“Opened is the face of king Amenemhat, he observes the Lord of the Horizon crossing the sky”, the northern with: “Higher is the soul (Ba) of king Amenemhat than the height of Orion, and it joins the Duat”.

The name of the god Amun in Amenemhat’s cartouches has been erased. This may have been done during the reign of Akhenaten in the 18th Dynasty, meaning that the pyramidion may have laid on the ground since c. 1350 BC.

This pyramidion is now housed in the Egyptian Museum in Cairo and is considered to be one of the most valuable artifacts from the Middle Kingdom, 12th Dynasty, and the reign of Amenemhat III, which is believed to have been around 1860-1814 BC.

It was discovered in Dahshur and is now on display in the Egyptian Museum in Cairo with the inventory number JE 35133.