Home / Egyptian queen Nefertari: The one for whom the sun shines

Egyptian queen Nefertari: The one for whom the sun shines 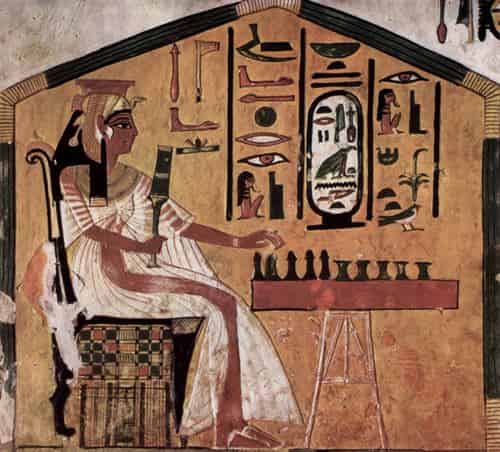 Nefertari Meritmut was an Egyptian queen of the 19th dynasty, the Great Royal Wife of Ramses II the Great, one of the most powerful pharaohs.

She played an important role as a Great Royal Wife, endowed with a brilliant political mind. She was buried in the Theban necropolis, in a beautifully decorated tomb.

One of the great unknowns that surround this queen is her birthplace and her family. Her husband, the future pharaoh Ramses II, was very careful to hide them, although it is clear that the veneration she had in life, as well as some of her titles, demonstrate a noble origin.

The discovery in her tomb of a knob inscribed with the cartouche of Pharaoh Ay appeared, only increased suspicions that Nefertari was related to the extinct 18th dynasty, which also seemed to corroborate her own name, heir of the already deified matriarch, Queen Ahmose-Nefertari.

If so, it is likely that Nefertari came from the southern city of Akhmim, and that Ay, whose name was being hunted by the pharaohs of the 19th dynasty, including Ramses II himself, could have been her great-grandfather, her grandfather, or her uncle.

Assuming that Nefertari was related to the 18th dynasty and the Ahmose-Nefertari line, she could well have been the daughter or granddaughter of Nakhtmin, in turn son of Ay.

Or she could even be the daughter of the ghostly queen Tanedyemy, whose role is still not clear, but that she could have been Ay’s granddaughter, Horemheb’s daughter and Seti I‘s wife. If so, Ramses II and Nefertari would have been brother and sister on the father’s side.

Nefertari married Crown Prince Ramses when they were both still in their teens. They had children around the age of fifteen. In those years Ramses had not yet been appointed co-regent, and he was already married to another woman, Isetnofret (or Isis-nofret), whose Nefertari would soon displace.

Upon assuming the throne, Ramses II already had several children, both by Nefertari and Isis-nofret, and promoted both to the rank of great royal wives.

However, Nefertari was the queen par excellence; Her particular charisma and the deep love that Ramses II professed for her cast all her rivals into the shadows, and made her the most important woman in the kingdom.

But Nefertari was not only the beloved wife of her king. She was a true stateswoman, who brought about the cessation of hostilities between Egypt and the Hittite Empire with her peace letters to Emperor Hattusili III and his wife, the also influential Empress Puduhepa.

The result was known as the “Perpetual Peace Treaty” (Treaty of Quadesh). Known in those places as Queen Naptera (a distortion of her own name), she would promote peace between the two powers of the moment, a role that she would finish consecrating next to her loving husband Ramses II.

Nefertari, as seen before, would not be content to dwell in the royal harem and bear children to her husband.

As Queen Tiye did a hundred years ago, she assumed a political and religious role that would not be reached again by any woman until the time of Cleopatra (with the exception of the short-lived pharaoh Twosret) and, previously, of Nefertiti).

Ramses II accepted and even promoted this, and the great royal wife Nefertari, was, among other things:

Although, without a doubt, the best known title of Nefertari would be Nefertari Meritmut: Nefertari means ‘beautiful companion’ and Meritmut means ‘Beloved of [the goddess] Mut’.

The best testimony of the love of Ramses II and Nefertari is the small temple of the two in Abu Simbel. While the bigger was dedicated to Amun, Ra-Horakhty, Ptah, and Ramses deified, the smaller was exclusively to the goddess Hathor, personified in the figure of Nefertari.

You only have to see the dedication of the entrance of that beautiful temple, full of images of Nefertari and her children, to see how the pharaoh felt for his queen:

“A work belonging for all eternity to the Great Royal Wife Nefertari Meritmut, through whom the Sun shines”.

The Tomb of Queen Nefertari

Without a doubt, the most famous tomb in the Valley of the Queens is the impressive tomb of Queen Nefertari, the wife of Ramses II. It is stamped with the number 66 (QV 66). It was discovered in 1904 by the Italian Schiaparelli.

It is accessed through a curious entrance formed by a ramp that leads to a hall. A second corridor, also with a ramp, on whose sides two stairs descend, leads us to the Chamber of the Sarcophagus from where other small chambers open.

The arrangement is very similar to tomb number 80, which belonged to Tuya, mother of Ramses II. It has splendid and refined drawings on its walls, made by a very skilled craftsman who knew how to faithfully capture the beauty of his queen.

The fresh, pulsating and impressive color really shocks and we cannot help but think that Ramses II could not build a more beautiful tomb for the one he loved so much.

The lines are sure, the images are perfect, and the gods seem to come out of the walls to make it clear that they protect a great queen, that they guard the wife of a great pharaoh.

How many children did Nefertari have?

Ramses II had at least 152 sons and daughters, born to his great royal wives, secondary wives, and concubines. However, only a few would reach notable prominence and enter the succession race.

These would be the offspring born of the first two wives of the pharaoh, Nefertari and Isis-nofret.

We ignore the relationships that existed between these two women, but it is often thought that there were intrigues between them, and that the disappearances of both, as well as some princes, could be due to palatial disputes between both sides.

Although it is logical that Isis-nofret did not consent to be displaced by Nefertari, none of this is proven, and although it is known that the battle for the succession was won by the Isis-nofret family, there were some children of Nefertari who reached an advanced age.

Nefertari had at least nine children with Ramses II, although there could be more. Their names were:

Amunherkhepeshef (“Amun Is with His Strong Arm”). and he was the first-born of Ramses II. He was born at least four or five years before his father was crowned. He held the title of General of the Armies , and enjoyed great importance until his death, between the years 26 and 31 of his father’s reign.

Pareherwenemef (“Ra Is with His Right Arm”). He was the third male child of Ramses II, and the second of those born to Nefertari. He participated in the Battle of Kadesh, and was decorated as Valiant of the Army and would become the First Officer of Chariots. He died young, around the 20s to 28s of his father’s reign.

Meritamen. The fourth of the pharaoh’s daughters. She was the image of her mother, and when Nefertari disappeared she married her own father and became a great royal wife. She inherited many of Nefertari’s titles, and was also a singer in the temple of Amun and a priestess of Hathor. It is believed that she died at the end of the long reign of Ramses II.

Meriatum. He was born when his father was already Pharaoh, and he was the sixth male child. There are few vestiges of him, but it seems that he became High Priest of Ra in the temple of Heliopolis and that he died in the year 47 of reign of Ramses II.

Nebettawy. The fifth of Pharaoh’s daughters. When Nefertari disappeared, she married her own father and was a great royal wife. She inherited many of Nefertari’s titles, and was also nicknamed “the favorite of the gods”. She would be buried in the Valley of the Queens in tomb QV60

Meryre (“Beloved of Ra”). The eleventh male. We do not know what positions he held, although he appears with his mother and brothers in Abu Simbel and in a few other places. It appears that he died between the ages of 26 and 36.

Henuttawy (“Mistress of the Two Lands”). She was the seventh daughter of the pharaoh and one of the daughters who would marry her father upon the disappearance of Nefertari. However, unlike her sister, the beautiful Meritamen, she was not a great royal wife. She would be buried in the Valley of the Queens in tomb QV73.

How did Nefertari die?

There is usually unanimity that Nefertari died around year 26 of the reign of Ramses II, when she would be between forty and fifty years old.

At that time it is quite possible that the Abu Simbel temples had not yet been completed, as the later decoration of the Hathor temple has fragments that allude to the death of Nefertari.

Perhaps the great royal wife was still alive at the end of the construction, but there is no doubt that the subsequent inauguration was carried out by Ramses II and that his companion was Meritamen, the daughter of Nefertari.

Was Nefertari about to die by then, so ill that she could not lead the ceremony, or was she already dead? We also ignore the causes of her death: illness, natural death, murder by the Isis-nofret side…

Be that as it may, Nefertari Meritmut, through whom the Sun shines, had become immortal. The afflicted Ramses II had the largest and most beautiful tomb in the Valley of the Queens built for her (and for many, the most beautiful of all Egyptian tombs), the QV66, discovered at the beginning of the 20th century and which still arouses our admiration.