Home / Why is Nefertiti missing an eye? 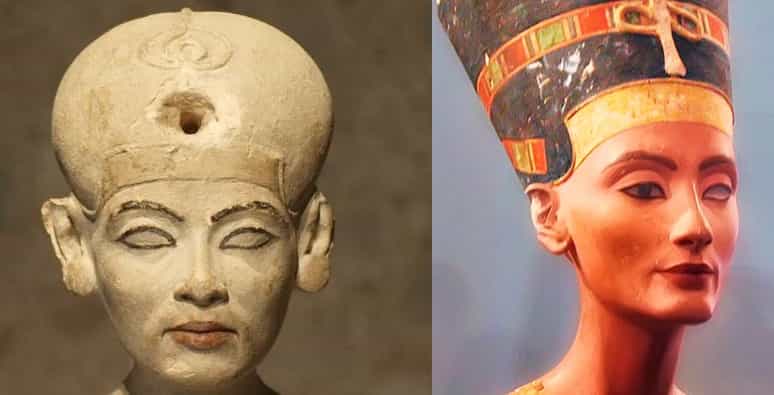 To know who Nefertiti is and what she represented for her time, we have to go back to one of the greatest civilizations of the past: Ancient Egypt, which developed on the banks of the Nile River from 3,000 BC to 31 BC when it was conquered by the Roman Empire.

The Egyptian civilization left a huge mark on the history of Humanity in fields such as mathematics, engineering or medicine. As for its cultural and artistic legacy, it is impressive and still full of enigmas.

It is impossible not to be speechless at the fabulous pyramids, the gigantic Sphinx of Giza or the wonderful and complex hieroglyphics.

During its 3,000 years of history, Egypt was ruled by different kings who accumulated all power and were considered divine by their people: The pharaohs .

One of those pharaohs was Amenhotep IV. He led the empire from 1353 to 1336 BC and, like the others, had several wives at the same time.

Of all of them, only one was considered the official wife, the most important. Well, Nefertiti had the privilege of being the Great Royal Wife of Amenhotep IV and together they had six daughters.

Nefertiti was therefore queen of Egypt. Everything indicates that her great personality made her shine with her own light during the reign and that she came to have a lot of political and religious power.

In short, she commanded almost as much as Pharaoh, something that was exceptional at that time. She was even referred to as the goddess Nefertiti.

What was the time when Queen Nefertiti lived?

Amenhotep IV was not exactly a lazy and uneasy man, quite the opposite. He stood out for being a revolutionary and innovative pharaoh who made great reforms during the 18 years that he ruled. His wife Nefertiti supported him in all his decisions.

To begin with, he made religious changes that were very controversial. His subjects worshiped many gods but above all one, the great god Amun.

Shortly after ascending the throne, Amenhotep IV decided that from that moment on, the god Aten would be the most important of all.

Then and in honor of him, he ordered the construction of a new city in the middle of the desert which he called Akhetaten (The horizon of Aten), today known as Amarna.

Pharaoh’s orders had to be carried out, so everyone got to work. In a place where there was nothing, thousands of people worked tirelessly to build the new royal palace, new houses, new temples … A new city starting from scratch!

When everything was more or less ready, the pharaoh made it the capital of the kingdom and moved to live there with all his family and the royal court.

As if this were not enough, he decided to change his own name, Amenhotep IV, to Akhenaten, which means “useful to Aten.”

But there were more changes. On an artistic level, he also insisted on breaking with the past and introducing novelties. Let’s see what he did with the sculpture!

What reform did Pharaoh Amenhotep IV make in the world of Art?

Since time immemorial, when the pharaohs commissioned a sculpture of themselves, they demanded to be represented always young and strong (even if they were not), looking straight ahead, rigid and without showing emotions.

Amenhotep IV (Akhenaten or, as he liked to call him) would have seemed boring to always see the same thing and decided to end that tradition of many centuries.

He ordered the sculptors working in his service to completely change their style. Henceforth, both he and his family should appear more realistic and natural. He thought that if they had physical flaws, there was no reason to hide them, and in fact, they were even exaggerated a bit.

For this reason, his statues represent him similar to how he was: A man with a too long face, an endless nose, a prominent chin, and a slightly flabby belly. Yes, let’s not kid ourselves… He was neither handsome nor had the body of an athlete, but it is clear that he did not care.

The queen, on the other hand, came out winning, because at that time she was a young woman, in her twenties and an incredible beauty.

Not in vain does Nefertiti mean “beauty has arrived”. The bust you see shows her in the best moment of her life and reflects how beautiful she was in reality.

The bust of Nefertiti

The bust of Nefertiti is made of limestone. The sculptor was carving the different parts of the face, and when he finished, he covered it with several layers of stucco, which is like a mass of plaster that can be polished and allows to give a better finish to the forms. Finally, he painted it.

Do you want to know what Nefertiti was like physically?

As you can see, Nefertiti has fine features, delicate skin and a long neck that give her great elegance. Her face appears tanned and even the tendons in the throat area are noticeable. She smiles slightly and her head holds a tall, slender blue crown that originally bore the emblem of a cobra on the front.

The result is a woman who is natural, modern and attractive to us.

I imagine you have already noticed that the beautiful queen is missing her left eyeball. At first, the archaeologists who found it assumed it had fallen off and did their best to get it back. Unfortunately, the quartz eye did not appear.

Another possibility is that in life she would have lost her eye, but this theory was discarded because there are other sculptures and reliefs of her and only in this case does she appear without it.

Over time, the researchers found that the cavity where it had to be embedded was very smooth and there was no trace of glue in it, which at that time used to be beeswax. This was very strange, for it meant that the eye had not strayed, but had never been placed on the queen’s face.

How weird, right? What could be the reason?

Imagine the pharaoh and the queen commissioning the master sculptor with lots of statues and reliefs with their faces. Too much work to do it alone! For this reason, he ran a workshop where he worked side by side with assistants and young apprentices.

It is not known for sure, but many believe that he made this bust so that his workers and students would know what the queen was like and could copy her face on other statues of hers.

In other words, it was a model that perhaps the master sculptor left unfinished on purpose so that his students, incidentally, could receive “practical classes” to learn how the eyes were inserted into the sockets.

On the other hand, it is difficult to think that such a beautiful and exceptional image could simply serve this function. The mystery is not yet completely solved!

What Happened to Queen Nefertiti?

It is not known what happened, but when the pharaoh had been in power for 12 years, his wife Nefertiti stopped appearing in documents, sculptures and reliefs of the time.It is as if the earth had swallowed her!

Perhaps she died young, perhaps she left the palace for some unknown reason … Today, the fate of this beautiful woman remains an enigma that is lost in the mists of time.

The reforms and changes of Amenhotep IV did not last long. As soon as he died, a new pharaoh succeeded him for a few months and later, the famous Tutankhamun, who ordered the court to return to Thebes (the old capital) and restored the cult of the god Amun. Little by little, the artistic representations of the pharaohs returned to the way they were before.

Akhetaten (Amarna) was abandoned forever and was forgotten.

Where was the bust of Nefertiti found?

In 1912 a German Egyptologist named Ludwig Borchardt directed archaeological excavations in the ruins of the city of Akhetaten (Amarna).

To their surprise, they found the remains of a house full of stone carved figures and heads of members of the royal family of Akhenaten. Thanks to an inscription, they concluded that it was the ancient workshop of a master sculptor named Thutmose, the favorite artist of Pharaoh Amenhotep IV (Akhenaten).

Buried among all these pieces of great value, the bust of Nefertiti appeared. They quickly identified her by the blue crown that, as queen, only she wore.

Where is the bust of Nefertiti exhibited?

If you want to see the bust of Nefertiti in person, you will have to go to the Egyptian Museum in Berlin (Germany), where in addition to admiring the beauty of this queen, you can surround yourself with sarcophagi, papyri, mummies and many other vestiges of the fascinating Ancient Egypt.

Egyptian queen Nefertari: The one for whom the sun shines