Home / Ring Representing Akhenaten and Nefertiti as Shu and Tefnut

Ring Representing Akhenaten and Nefertiti as Shu and Tefnut 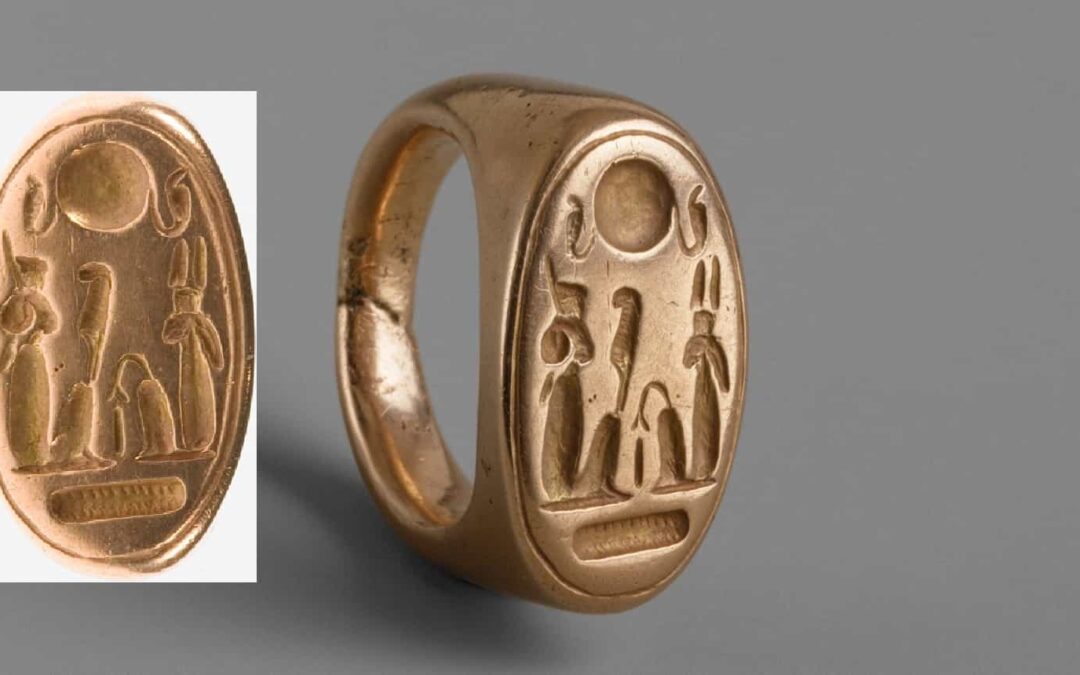 The ring representing King Akhenaten and Queen Nefertiti as Shu and Tefnut is a ring dating from approximately 1353 BC to 1336 BC, belonging to ancient Egyptian art.

It was found between 1891 AD and 1892 AD during archaeological excavations by British Egyptologist William Matthew Flinders Petrie, among the ruins of the Amarna region, located on the eastern bank of the Nile River in Egypt.

In 1921 AD, it was sold at the Sotheby, Wilkinson & Hodge auction house in London (England) and was purchased by George Edward Stanhope Molyneux Herbert V (also known as Lord Carnarvon).

The ring became part of the Carnarvon collection until AD 1926. George’s widow, the Countess of Carnarvon, Almina Herbert, sold the entire Carnarvon Collection to the Metropolitan Museum of Art in New York City (United States of America).

It has a diameter of 2.5 cm, and the bezel has a length of 2.3 cm. It is made of gold, using casting and incision techniques.

It has a pair of hieroglyphs on the bezel that can be read as an ideogram.

On the bezel are two depicted figures that have been identified as:

Located on the left is the pharaoh Akhenaten (also known as Amenhotep IV), the tenth pharaoh of the eighteenth dynasty of ancient Egypt.

While the figure on the right represents Queen Nefertiti, the first great royal wife of Pharaoh Akhenaten.

To conclude, it should be emphasized that, in Ancient Egypt, both deities were considered the father and mother of the Earth and the sky. It is also observed how they are symbolically represented by the Earth’s hieroglyph (below) and by the Sun flanked by two sacred cobras (above).

It is currently in the Metropolitan Museum of Art in New York, United States of America.