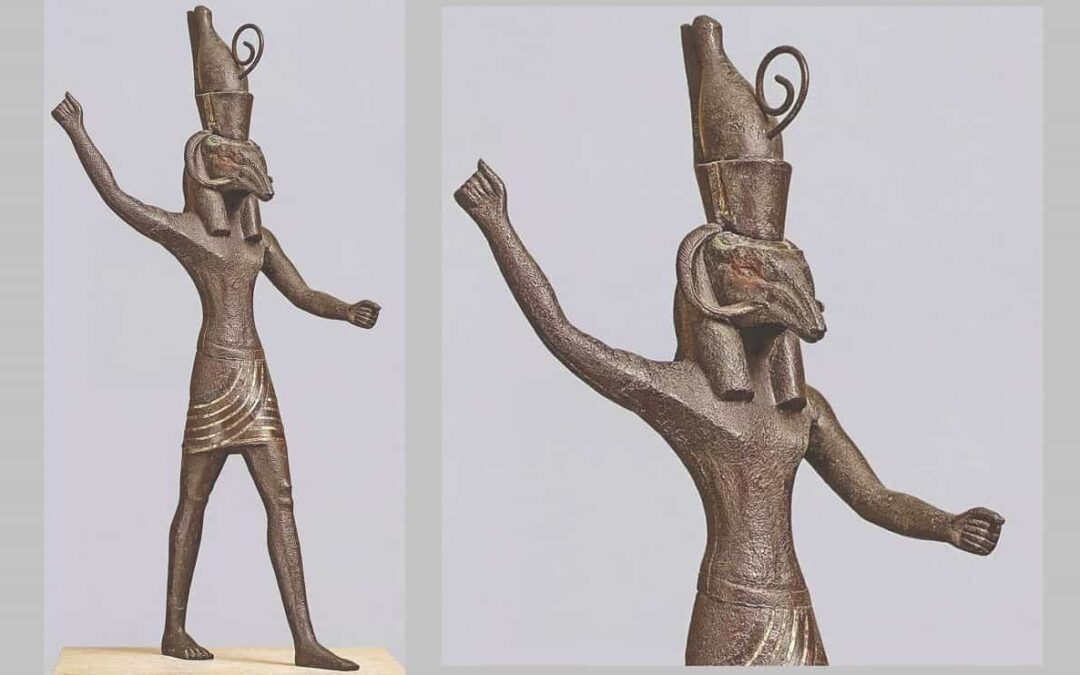 The ancient Egyptian bronze statuette of Seth represents the ancient Egyptian god of chaos, the desert, storms, disorder, violence, and foreigners. It is dated to the late New Kingdom (Nineteenth–Twentieth Dynasty: 13th–11th centuries BC) of uncertain provenance (perhaps Saqqara). It is preserved in Copenhagen in the Ny Carlsberg Glyptotek.

The original statue underwent modifications in ancient times; the ears of the mysterious “animal of Seth” were replaced by two coiled ram horns, although Seth’s typical curved and elongated snout survived.

This replacement resulted in a representation that was initially attributed to Khnum, the ram-god of the waters of the Nile, and then to the god Amun, who has been occasionally represented in sheep form since Late times.

Such modifications to the statuette could be the result of political changes. Seth was assimilated into foreign divinities such as Reshef and Baal in his role as the god of foreigners. He was highly adored by the Hyksos sovereigns who occupied northern Egypt, ruling from Avaris until 1550 BC.

The kings of the Nineteenth Dynasty (1292–1189 BC), originating from the Avaris area in the eastern part of the Nile delta, viewed Seth with the highest regard.

After the Twentieth Dynasty, the temples of Seth lost influence and prestige, and Seth’s images stopped being produced.

Heavier on top than on the bottom and with relatively slender limbs, the statuette’s body was cast in a single piece apart from the right arm, which was cast separately and attached to the shoulder afterward.

The right arm is raised, the left slightly flexed and stretched forward; both hands are closed into a fist, and it is impossible to say with certainty what they are holding. It seems like the typical pose of the pharaohs in the role of warriors mowing down their enemies (see Narmer Palette).

Seth wears the red and white double crown of Upper and Lower Egypt, a rare but not unusual iconographic choice during the New Kingdom; the crown was made separately and perhaps added at a later time, although two marks on its sides suggest that it was placed when the figure still had Seth’s long ears, before their replacement with ram’s horns. The pleated skirt has gold and copper inserts.

Ring Representing Akhenaten and Nefertiti as Shu and Tefnut