Home / The Seated Egyptian Scribe from the Louvre Museum 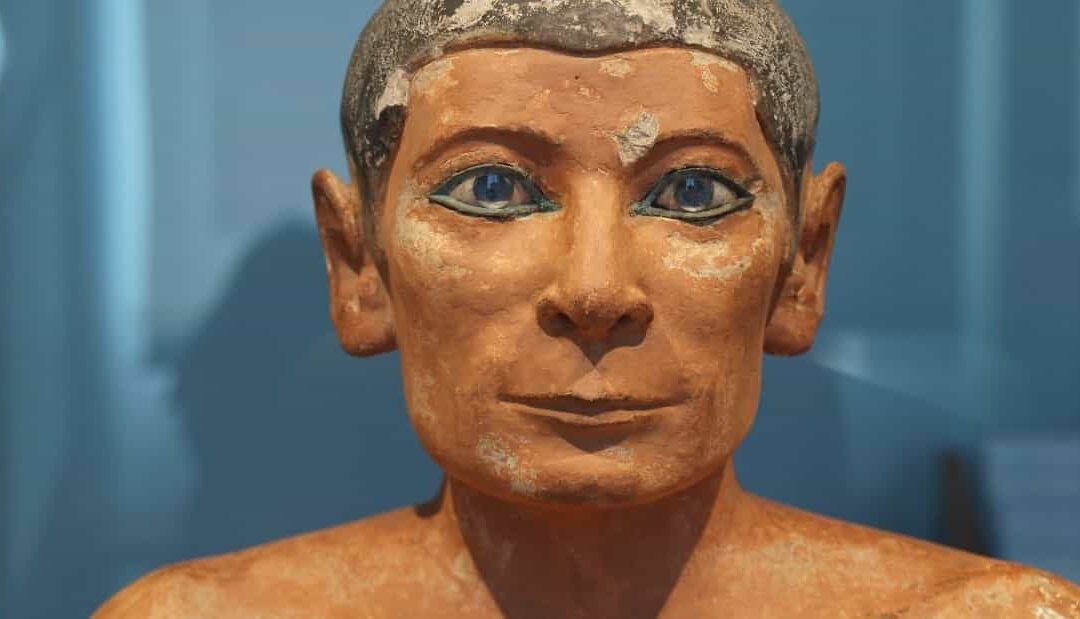 This small, realistic limestone statue is over 4,000 years old and depicts an Egyptian scribe about to write on a sheet of papyrus. It was discovered under mysterious circumstances by Auguste Mariette in 1850.

“My God, he seems to be alive!” the head of the Egyptian Antiquities Service, Frenchman Auguste Mariette, must have thought when he came face to face with the statue of a seated man dressed in a short skirt and holding a scroll of papyrus on his lap.

The ancient scribe stared at him with his rock-crystal blue eyes, which had watched impassively on over the centuries. On his clean-shaven face, his thin lips pressed together into a half smile. Perhaps he was glad to see the light of Ra again after so many millennia hidden in the darkness of a tomb…

Who was this scribe?

We are talking about one of the most famous sculptures of ancient Egypt: The seated scribe, which today is exhibited in the Parisian Louvre Museum.

This 53-centimeter-high limestone sculpture was discovered during excavations carried out by Mariette’s team at the Saqqara necropolis, about twenty kilometers from Cairo, in 1850.

There is much we do not know about this statue, but what we do know is that the Egyptologist took the statue of the scribe to Paris, where it became part of the Egyptian collection at the Louvre Museum.

However, although we do not know who this small sculpture represents, it is clear that its owner must have held a position of high importance in the pharaonic administration. This would have contributed to his right to have a tomb and receive offerings, as well as the cult statue that represents him proudly performing his tasks for all eternity.

Member of a privileged class

The seated scribe in the Louvre is a piece of exceptional realism despite its small size; the original polychrome is practically intact.

Before painting it, the piece was first covered with a thin layer of plaster. The posture is typical of a scribe: Seated and cross-legged.

The sculpture has several inlays, highlighting those of the eyes—made of polished quartz framed in copper—and the two nipples, made of wood.

The man is depicted as obviously overweight, as manifested through the “love handles” on his torso (possibly a sign of his high social status) and is ready to write on the papyrus he holds in his lap.

But without a doubt, what attracts the most attention to the scribe is his face. His chin and cheekbones are very marked, and his lips are thin.

The inlaid eyes give the statue great liveliness, and are framed by thin, defined eyebrows. The sculpture is placed on a plinth, so it could be that it was intended to be placed in a niche or possibly in the cult chapel of a tomb.

Pharaohs' private letters reveal what politics was like 3,300 years ago