Home / The Temple of Nefertari at Abu Simbel 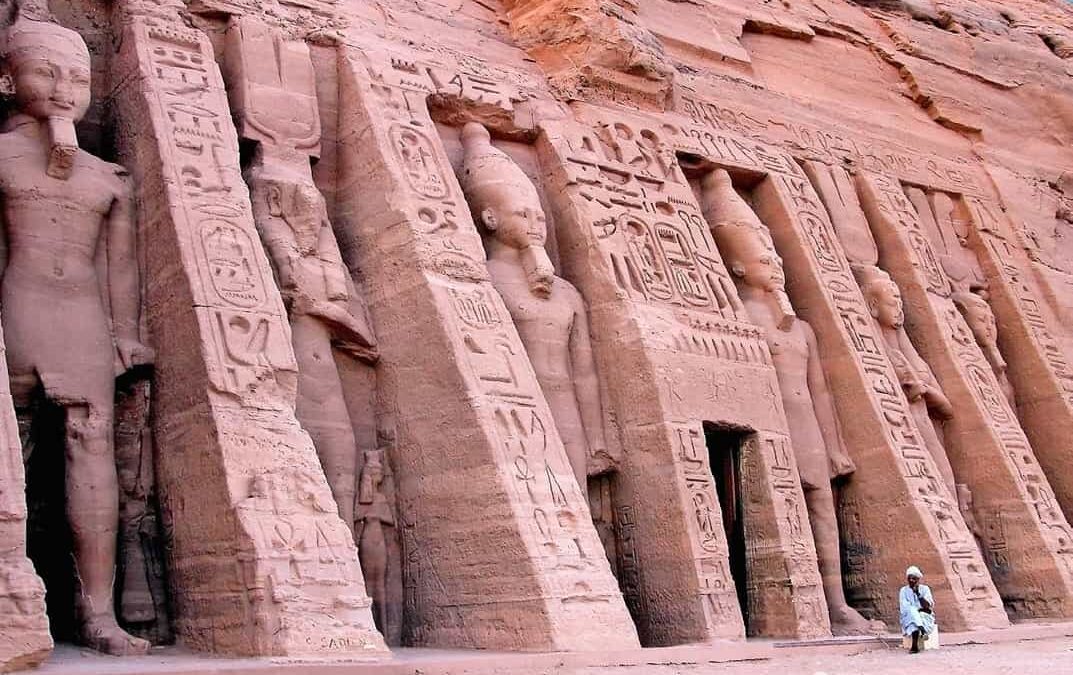 To the north of the magnificent temple of Ramses II in Abu Simbel we find one that the monarch ordered to be built, or rather carved, in honor of his wife Nefertari, and the goddess Hathor.

Located on the Ibchek promontory, it is a unique temple, since in it the king yields part of his prominence to the queen. It is smaller than the temple of Ramses II, and its interior configuration is similar to the main temple’s.

The facade, carved into the rock and slightly inclined, includes six monumental statues each about 10 meters high. This construction is peculiar as it is the first time a queen has been represented on the same scale as the pharaoh on the temple’s facade.

These statues are in two groups of three with the ones at the ends showing Ramses II, and the ones in the center showing Nefertari. They are located within niches and are represented mid-stride with their left foot forward.

On each side of these there are smaller statues of members of the royal family—princesses next to the statues of Nefertari and princes next to Ramses II.

The six statues have different characteristics, including:

In the middle of these six statues is a door leading to the interior of the temple; it is decorated with cartouches to mark the name of the monarch, as well as depictions of offerings to the goddesses Isis and Hathor.

Entering between the giant figures of Ramses II, we reach the hypostyle hall, which is roughly 11 by 10 meters.

The goddess Hathor is carved into the top of the six pillars placed in two rows around the axis—Hathor is presented as the protagonist in the decoration of the walls of this room.

Following the hypostyle hall, we reach the vestibule. There are two lateral chambers on each side; as they are devoid of decoration, they could have been used as warehouses for the temple.

Lastly, there is the sanctuary. In it is the royal couple in front of several gods, as well as the goddess Hathor—represented in the form of a celestial cow—with Ramses II under her chin.

Another scene shows Nefertari, reverent, before the goddesses Mut and Hathor. The monarch is shown making an offering of fire and water in front of his own deified image, and that of his wife.

The temple was left unfinished, since in the sanctuary were two doors that had been left ready to excavate two rooms that had never been started.

The importance of Nefertari in the temple is clear. In addition to her relevance in the facade, the queen appears to repeatedly participate in divine rites on the same level of equality as her husband in the reliefs.

On the walls of the temple, we find a scene of great importance: The coronation of Nefertari by the goddesses Isis and Hathor. They place a crown of cow horns on the queen’s head, and between the horns appears a sun and tall feathers.

In another scene, the goddess Hathor (again, in the form of a cow) rides her boat through a thicket of papyrus while Nefertari offers her lotuses, a symbol of her resurrection.

Without a doubt, her temple in Abu Simbel and her tomb in the Valley of the Queens are two good examples that emphasize the importance of Queen Nefertari to Ramses II the Great.

Today We Travel To... Tanis in San El-Hagar