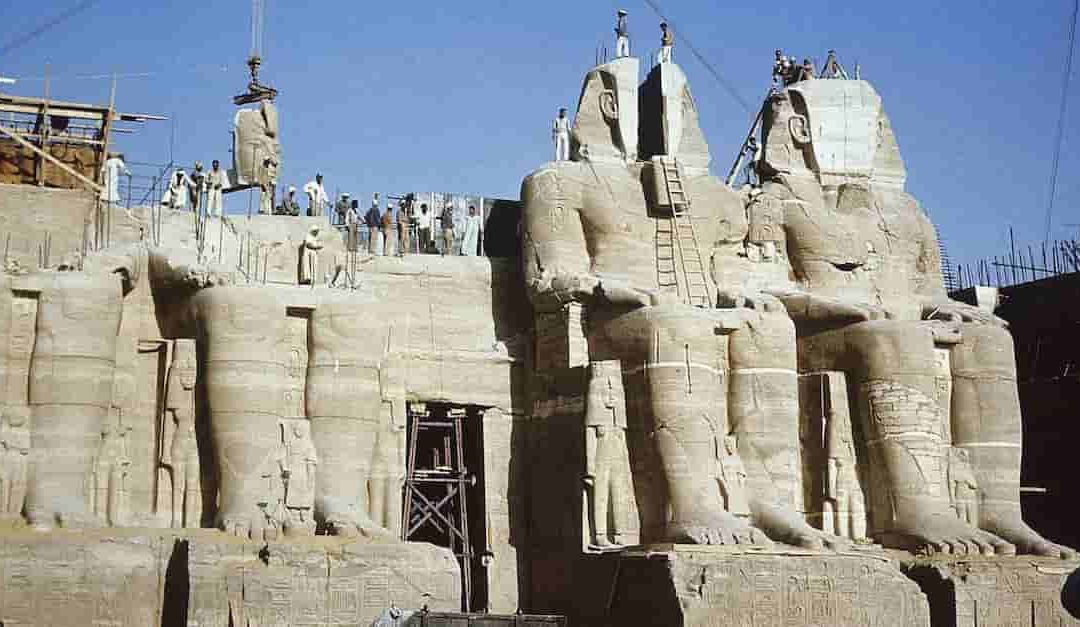 Abu Simbel is a complex formed by two temples carved into the rock, built by the will of Pharaoh Ramses II during his reign (1279-1213 BC) to commemorate his victory in the battle of Qadesh (ca. 1274 BC).

The temple of Ramses II, or major temple, is the largest that this pharaoh ordered to build in Nubia while the minor temple is dedicated to Nefertari, his first.

Both are located on the left bank of the Nile south of Egypt, although as we will see later they were not always located in the same place.

The construction of the temples lasted about 20 years and its purpose was to impress the southern neighbors as well as reinforce the influence of the religion of the pharaohs in the region.

Purpose they fulfilled until the decline of the ancient Egyptian civilization, when the temples were forgotten and the desert sand was slowly taking over the place.

More than 3,000 years after its construction, in 1813, the Swiss explorer Johann Ludwig Burckhardt found them largely covered by sand.

On his return to Europe he shared his discovery with his colleague Giovanni Belzoni, who did not hesitate to travel to the place in 1815 with the firm intention of accessing the temples.

Entering was not going to be an easy task. The temple of Ramses, with its four colossi guarding the entrance,  was invaded by such an amount of sand that Belzoni left his company disappointed and would not resume it until 1817, two years later.

This time he would succeed. He managed to dig an access to the temple to, yes, take all the valuables he was able to transport, something common in the explorers of the time.

The Nile overflowed annually. These floods, by leaving sediment of nutrients in the soil, turned the lands near the river into a fertile plain ideal for agriculture.

However, the unpredictable alternation of flood level led to the loss of whole crops due to water logging or drought and consequent famine in the population, so it was considered necessary to build a dam that regulates the level of flooding to protect farmland and cotton fields.

The construction of that dam in Aswan was to control the floods and would supply electrical power to a large part from the country.

The problem was that this construction would create a huge lake (Lake Nasser) that would submerge a lot of treasures from ancient Egypt under its waters, among them the fabulous temples of Abu Simbel.

To save the main monuments located south of the dam, a coalition of archaeologists, technicians and experts from 22 countries championed by UNESCO, began devising plans for rescue.

The decision taken was to move as many temples as possible. In a race against time, they proceeded to disassemble piece by piece, literally, to reassemble them in new locations, away from the rising waters.

In June 1963 the final decision was made: to cut the temples into large blocks, of about twenty tons each, raise them to a level that would protect them from the waters of the lake formed by the dam and rebuild them carefully.

Thus, after thirty-three centuries, it returned to work for the glory of Ramses. Its rescue began in 1964 and cost the sum of 40 million dollars.

Between 1964 and 1968, the temples were dismantled to be rebuilt in a nearby area, 65 meters higher and about 200 meters further.

The different blocks were numbered so that in the reconstruction they occupied the same place that they once had. The period of storage of the same offered the opportunity that could be subjected to a preparation and restoration before being placed in its final location.

However, before proceeding with this arduous task, a series of preparatory work was carried out. In the first place, in order to avoid the arrival of the waters during the rescue works, it was necessary to build a retaining wall in front of the temples.

A steel tunnel was also made that penetrated inside the temples and that allowed access to them during the dismantling of the facades. In addition, as a precaution against the increase in pressure and vibrations caused by the excavation and removal of the rock over the temples, load beams were constructed to stabilize their interior ceilings.

To place each piece in the new location, a bonding and filling mortar was prepared for the same sandstone powder compound and a dye whose hue was similar to that of the blocks, as well as quicklime and white cement used as a compacting agent.

In order to unload the temples of the heavy load of having tons of rock on them, they were made domes that allowed such a function, as well as reducing the amount of rock needed.

The dome of the great temple, that of Ramses II is about sixty meters wide and twenty-five meters high, becoming, at that time, the largest bearing vault of the time.

One of the most important Egyptian phenomena is the Solar alignment over the grand temple, which meant that twice a year, and with mathematical precision, the sun’s rays penetrated the temple to the sanctuary, located deep inside, illuminating the statues of Amun, Ra, and Ramses, and leaving only the face of the god Ptah in gloom, surely intentionally, since he was considered the god of darkness.