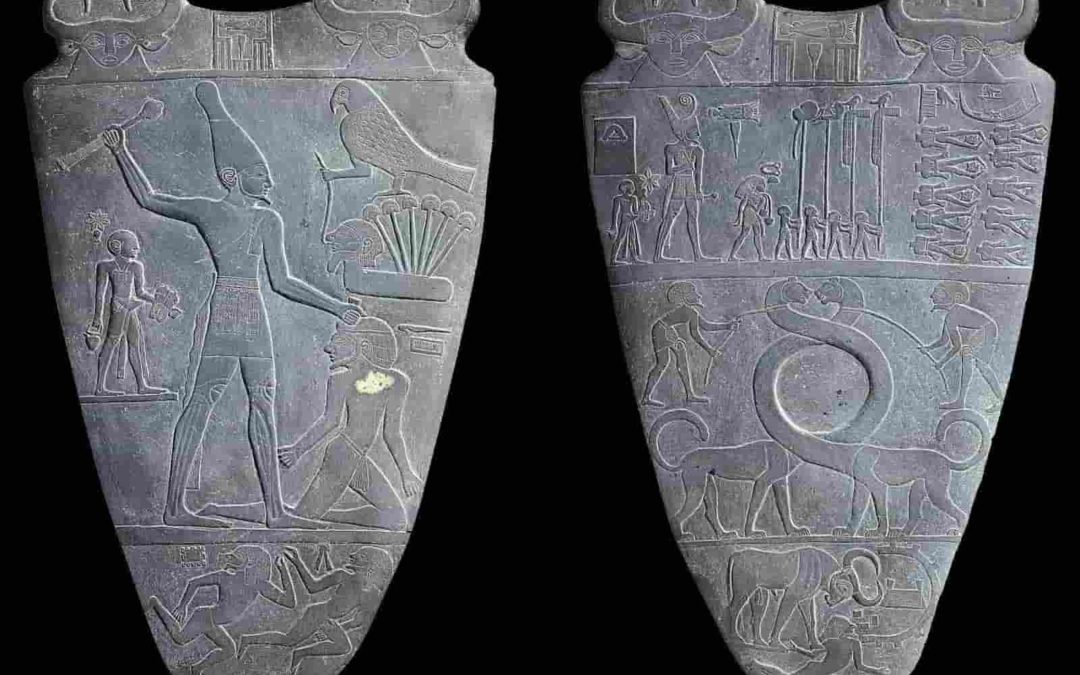 From the beginning of the Egyptian civilization an exceptional piece of art stands out, both for its quality, its meaning and its state of conservation: it is the Palette of Narmer, which dates from the predynastic period (3200 to 2755 BC.)

The name of King Narmer has been found in different places ranging from the Delta to Abidos, considering it the unifier of Upper and Lower Egypt.

This commemorative palette seems to testify to this union by bearing his name. It is the first piece of monumental character of Egyptian art, although its size does not exceed 64 cm. high, but his message is solemn enough to accept this consideration.

Found in 1898 in the temple of Horus, located in Nekhen (Hierakonpolis), today it is located in the Cairo Museum.

What were Egyptian palettes used for?

The function of the palettes was of support for the pigments, creams, oils, etc., that were applied in the body, although it was common to find them inside funerary trousseau or as offerings in the temples.

They are made of different materials, such as stone, ivory, wood and basalt, and they collected both mythological and real events.

What does the palette of Narmer represent?

The obverse has three horizontal registers. In the superior and most important appears King Narmer touched with the double crown that symbolizes the union of Upper and Lower Egypt. Accompanied by his entourage, he inspects in a group of beheaded men representing the enemy army.

In the central register there are two fantastic animals facing each other that link their long neck as a symbol of union.

In the lower register, the scene depicts a bull (winner’s symbol) trampling on a barded man (enemy army symbol), which represents a new manifestation of power from the emerging State.

The top of the palette consists of two cow heads seen from the front, including the name of the new monarch of the “two lands” in hieroglyphic writing.

On the reverse stands the figure of the king, occupying much of the composition. On this occasion he wears the crown of Upper Egypt, which cancels any doubt about his origin and reinforcing the theory that the unification of the “two lands” was a warlike conflict where the culture of the south, more developed, was imposed on the communities del delta.

The King Narmer strikes a man falling at his feet, representing the peoples of the Lower Egypt, scene that is explained by the cryptogram shown to the side.

The lower register is occupied by two human figures, well adapted to the shape of the piece, possibly representing two cities.

The importance of this piece is exceptional not only as a historical document, but as a fundamental source for the plastic arts developed in the following stages.

In its reliefs, some conventions present in all Egyptian art are already defined, such as the hierarchical perspective (the most important characters always appear larger), the law of frontality (front torso and legs and head profile) and the layout of narration in differentiated records.

The Egyptian art sought and created ideals that were constantly repeating, through symbolic models that met the needs of religion.

Although there is a naturalistic side in Egyptian art, it would be a mistake to consider that beauty is sought for beauty in art. The Narmer Palette inaugurates the official side of Egyptian art.