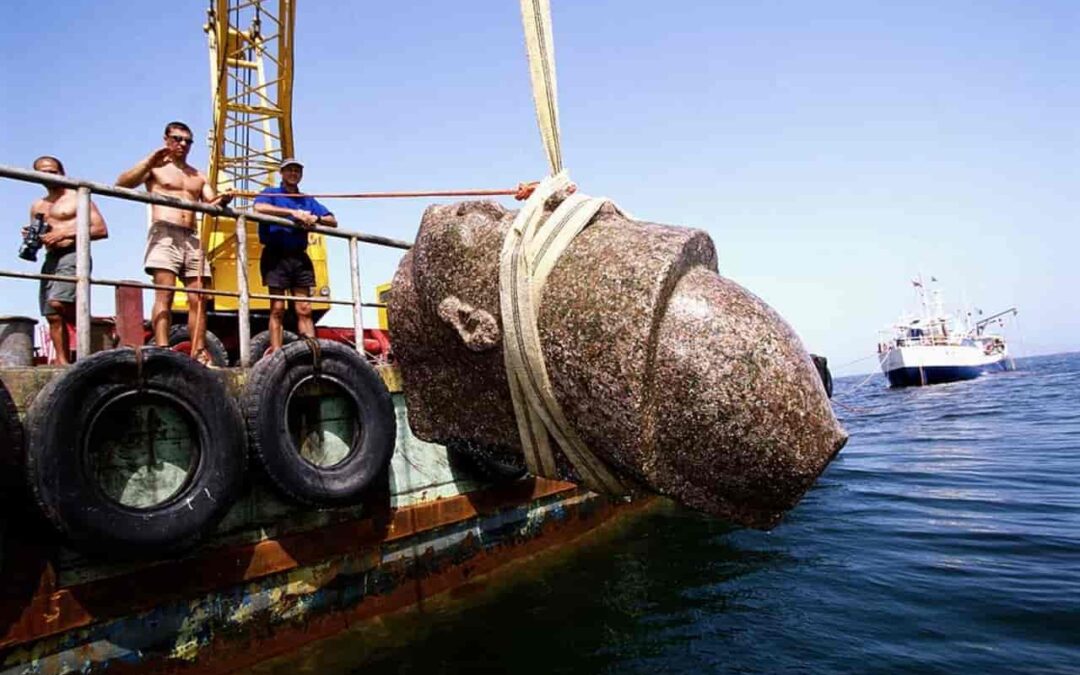 More than 60 ships and 700 types of anchors have been located on the seabed of the ancient Egyptian city of Thonis, which emerged from the waters in 2000.

In 2000, and after two years of searching, a Franco-Egyptian team of underwater archaeologists, led by the Frenchman Franck Goddio, discovered the lost city of Thonis-Heracleion, submerged in the Bay of Abukir, in the Nile Delta, in Egypt.

Heracleion is the Greek name for the ancient Egyptian city of Thonis, which was the main port of the Nile country, but must have disappeared under the waters after an earthquake that devastated the region more than 1,000 years ago.

Thonis-Heracleion was the gate and port of entry to Egyptin the first millennium BC, before the founding of Alexandria, whose legendary lighthouse has not yet been located by Goddio’s team.

The vessels engaged in maritime trade unloaded their merchandise at this port, after paying the corresponding fees, and then traveled up the Nile River to the interior of the country.

“The discoveries made at Thonis-Heracleion since 2000, thanks to the work of a multidisciplinary team and the support of the Hilti Foundation, are very encouraging.

The layout of the ancient city, with its ports, canals and monuments, is taking shape and every year more valuable information is obtained ”, Franck Goddio recently commented on the occasion of the Heracleion international conference in the context.

The first vestiges of the ancient city of Thonis-Heracleion have been located at a distance of 6.5 kilometers from the current coastline.

Currently, divers and researchers are examining 64 Egyptian ships, dating from between the 8th and 2nd centuries BC, many of which appear to have been expressly sunk.

The vessels lie in the mud of the seabed and, according to the researchers, are in an excellent state of conservation. 700 different types of ancient anchors have been detected that could represent the largest nautical collection in the ancient world.

“The study has revealed a huge submerged landscape that includes the remains of at least two ancient settlements of great importance, located in a part of the Nile delta crossed by natural and artificial waterways”, explained Damian Robinson, Director of the Center for Maritime Archeology at the University of Oxford (OCMA).

“One of the key questions is to know why several of these ship graveyards were created near the port. “Ship 43” appears to be part of a larger group of at least ten ships, a large ship graveyard located about a mile from the mouth of the Nile.

This should not have been a simple abandonment of ships, but a form of block enemy ships from entering the port city. Although the interpretation is attractive, we must also consider whether these ships sank in order to claim certain properties, “he adds.

The Oxford University Center for Maritime Archeology (OCMA), founded in 2003, is collaborating on the project with the European Institute of Underwater Archeology (IEASM), which in turn cooperates with the Egyptian Ministry of Antiquities.

Sanda Heinz of the University of Oxford has discovered more than 300 statuettes and amulets submerged in Thonis-Heracleion, belonging to the late Hellenistic period of Egypt.

In most of the figures divinities such as Osiris, Isis and their son Horus are represented. ‘These figures were mass-produced in various periods on a scale never seen before.

These findings suggest that they were made primarily for the Egyptians. However, there are indications that some foreigners also bought them and took them to temples abroad, ”announced Sanda Heinz.