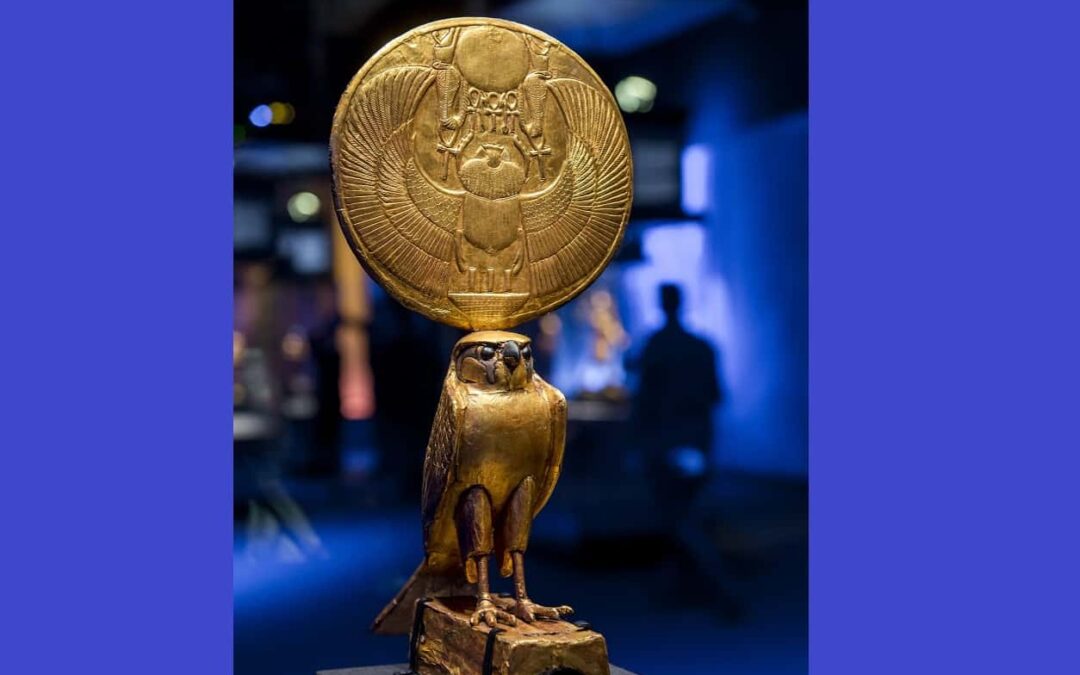 Horus is the name of a god of heaven in ancient Egyptian religion that primarily designates two deities: Horus the Elder (or Horus the Great), the last born of the first five original gods, and the god Horus the Younger, the son of Osiris and Isis.

Horus is above all a general term for a large number of hawk deities, but the name “Horus” usually designates the oldest god of the first five or the son of Isis and Osiris who defeated his uncle Set and restored order on earth.

He was a powerful god of heaven associated with the sun, mainly, but also with the moon. He was the protector of ancient Egyptian royalty, avenger of evils, defender of order, unifier of the two lands, and, based on his battles with Set, a war god regularly invoked by the ancient Egyptian rulers before battle and praised afterward.

Horus the Elder is one of the oldest gods in Egypt, born from the union of Geb (earth) and Nut (heaven) shortly after the creation of the world.

In some versions of the story, Horus is the son of Hathor, while in others she is his wife and sometimes she is Horus’ mother, wife, and daughter.

In his role as The Distant, Horus performs the same task as the distant goddess, a function associated with Hathor (and a number of other female deities) that leaves Ra and returns, bringing transformation.

The sun and the moon were considered Horus’ eyes, watching the people of the world day and night, but he could also approach them in times of trouble or doubt.

Imagined as a hawk, he could fly away from Ra and return with vital information and, in the same way, he could quickly bring comfort to those in need.

The God Horus and the Goddess Isis

The goddess Isis suffered a difficult pregnancy with an exceptionally long birth and gave birth to the falcon god alone in the swamps of the Delta.

She and her son hid from god Set and his demons in the bushes, only going out at night to eat accompanied by a bodyguard of seven scorpions that were given to her by the goddess Serket.

Isis, Serket, and Neith raised Horus in exile until he reached adulthood and was strong enough to challenge his uncle for his father’s kingdom.

What Does Horus Symbolize?

Horus, the falcon god of ancient Egypt, became known as Horu-Sema-Tawy, The Horus, Unifier of the Two Lands after defeating Set and restoring order to the land.

He rejuvenated the land by implementing his parents’ policies and ruled wisely. Because of this, the kings of ancient Egypt, starting with the first dynastic period, aligned themselves with the falcon god and ruled in his name.

Osiris was the first king of Egypt to establish order and then went to the underworld, while Horus was the king who restored order after being overthrown by Set and brought Egypt from chaos to harmony.

The ancient Egyptian kings therefore identified with Horus in life and with Osiris in death. During their reign, they were seen as the physical manifestation of the falcon god under the protection of Isis.

One notable exception to this was King Peribsen, the sixth king of the Second Dynasty, who clearly aligned himself with Set. As the king of Egypt was the “great house” that protected his people, all citizens of Egypt were under the protection of the god Horus.

Horus was revered in many ways and in many different places, with the hawk being worshiped along with other deities in many Egyptian temples.

His role as a unifier of the two lands and maintainer of order made him a symbol of balance, a concept highly valued by the ancient Egyptians.

The Cult of Horus

Horus was worshiped in temples built in his honor and his statue placed inside the inner sanctuary, where only the high priest could assist him.

The clergy of the Cult of the falcon god were all male and claimed protection from Isis, Horus’ mother. The Egyptian people would visit the temple courtyard to ask for help or receive alms, give donations, or have their dreams interpreted.

They also sought advice, omens, medical assistance, and marriage counseling, as well as protection from evil spirits or ghosts.

There were numerous places of worship for Horus, but the main centers were Khem, Pe, and Behdet in the Delta region and Edfu and Kom Ombos in Upper Egypt.

In Edfu, Horus was worshiped alongside Hathor and his son Harsomptus and the annual Coronation of the Sacred Falcon took place there.

During this event, a royal hawk represented Horus as king of all Egypt, uniting the ancient falcon god with his form as Horus son of Osiris and with the king.

What Do the Four Sons of God Horus Represent?

The Four Sons of Horus were Duamutef, Hapy, Imsety, and Qebehsenuef. They were associated with life after death and protected the vital organs of the deceased.

Each of these gods represented one of the four cardinal points of the compass and was presided over and protected by a goddess.

Duamutef, a jackal god, protected the stomach and represented the east. He was protected by Neith.

Hapy, a baboon god, protected the lungs and represented the north. He was protected by Nephthys.

Imsety, a god in human form, protected the liver and represented the south. He was protected by Isis.

Qebehsenuef, a hawk god, protected the intestines and represented the west. He was protected by Serket.

The organs were stored in canopic jars, some of which had the head of the protective god as a lid handle. The most famous example of these protectors is the alabaster artifact from the tomb of Tutankhamun, which features carved images of Isis, Neith, Nephthys, and Serket.

The Four Sons of Horus were typically depicted as mummified men with the heads of jackals, baboons, humans, and hawks.

Horus was often represented with the double crown, falcon-headed sun, or as a winged hawk. These symbols were used as a form of protection on doors and in temple rooms. Along with his parents, Osiris and Isis, Horus formed the most important triad in ancient Egyptian religion.