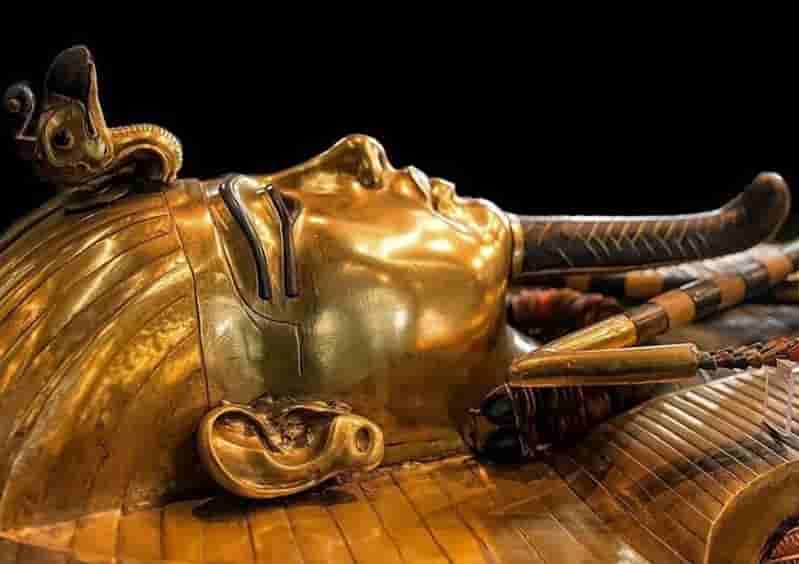 Most of the Egyptian pharaohs are remembered because they were great conquering soldiers or because they built gigantic temples and tombs. Tutankhamun was neither a great soldier nor a great builder; however he is the best known of the pharaohs.

This circumstance is due to the dramatic discovery of his tomb in 1922. Unlike the rest of royal tombs, it was never sacked and therefore was full of magnificent treasures.

Tutankhamun was born approximately in 1341 BC He only reigned for nine years and died before reaching the age of 20.

With the name of Tutankhaten, the boy was raised in the new royal capital: Akhetaten.

His father “Akhenaten” had rejected the traditional gods of ancient Egypt in favor of a new god, Aten, and moved the Court from the old capital, Thebes.

Unlike the ancient gods, Aten was not represented as a person or animal, but as the Sun.

Tutankhaten’s close relationship with the royal family is emphasized by his marriage to Akhenaten‘s daughter, Ankhesenpaaten, much older than him and probably his sister.

This marriage gave more consistency to Tutankhaten’s aspirations to the throne.

When Akhenaten died, it seems that Smenkhkare, Tutankhaten’s brother, sat on the throne for a short period, when Tutankhaten was nine years old, succeeded him.

His name was changed to Tutankhamun and the city of Akhetaten was abandoned.

The transfer of the royal court to Memphis and the restoration of Amun as the chief god of Egypt suggest that the young king’s counselors opposed his father’s ideas and wanted to return to the traditional ideology.

Tutankhamun died when he was about 18 years old. It is unknown if it was as a result of a conspiracy against him, but his body does not show unusual signs of violence.

His death certainly was unexpected, since he had not yet prepared a grave for himself in the Valley of the Kings.

Instead, a small non-royal tomb was quickly adapted – perhaps destined for an esteemed courtier – and during the 70 days that the mummification of the body lasted its walls were decorated.

The modest nature of the tomb meant that, unlike some of the largest and most magnificent tombs in the Valley of the Kings, Tutankhamun’s was first ignored and subsequently forgotten, especially after the debris produced by the excavation of the nearby tomb of Ramses VI.

King Tut remained undisturbed for more than 3,500 years, until his grave was discovered by English archaeologist Howard Carter in 1922.

The discovery of the tomb of King Tutankhamun

Sponsored by the aristocrat Lord Carnarvon, Carter had been working in the Valley of the Kings since 1915. On November 4, 1922, his workers discovered a group of steps leading to a blocked entrance. The access seals were intact and mentioned the owner of the tomb: Tutankhamun.

Behind this entrance, a corridor led to a second door. Carter opened a small hole in it to see what was behind it.

What he saw was, in his own words: “everywhere the brightness of gold.” I was looking into the first of the four rooms of the tomb that, while small, were full of treasures.

The first room, the Antechamber, measured 7.8 x 3.5 meters. The most notable objects were three gold-plated rim beds in the shape of sacred animals stacked against the back wall and, to the left of the entrance, a group of six dismantled chariots.

Two doors led out of the Antechamber. The first, on the left, led to a small room called the Annex, which seems to have been where food, wine and oils were stored for the king.

The other entrance, on the right, was completely blocked and guarded by a couple of life-size king statues. This entrance led to the burial chamber.

Like the other rooms, the Funeral Chamber was too small to be the tomb of a pharaoh; it only measured 6.37 x4.02 meters.

It is the only room of the four with decoration painted on the walls. But more importantly, it was there where Tutankhamun himself rested.

After the Funeral Chamber there was another small room. The Treasury was called, mainly because of the superb quality of the objects found inside, which included model ships, gold altars and jewelry boxes.

In the Treasury there were also two miniature coffins, each with a mummified fetus inside. Is it about the unborn children of Pharaoh and that is why Tutankhamun did not leave heirs to succeed him?

Unfortunately, Lord Carnarvon did not know what was hiding inside the Tutankhamun sarcophagus, because he died earlier, in April 1923 and by then the long task of emptying the grave and conserving the objects inside it had just begun.

The work was finally completed in 1932 by Carter, who died seven years later.

The Carnarvon and Carter memorial is the wonderful collection of objects from the tomb of Tutankhamun that they discovered, in addition to the history of what is surely one of the most exciting and spectacular archaeological discoveries made so far.

The funeral mask of King Tut

The mask is only part of the great treasure found in the burial chamber.

The mummified body was stored inside several sarcophagi, one inside the other. Inside a quartzite sarcophagus was a cypress wood coffin covered by a thin layer of gold.

Inside it was a second gold-plated wooden coffin, elaborately decorated with precious materials, including faience, obsidian and lapis lazuli.

Finally, there was a solid gold coffin that weighed 110 kg. When the latter’s lid was lifted, he revealed the mummified body and the golden funeral mask of Tutankhamun.

The king’s hands were also covered in gold and the bandages hid an impressive amount of jewelry.

Who Was king Tut? Why Was He Important for History?

Why King Tut had an awesome dagger from outer space?