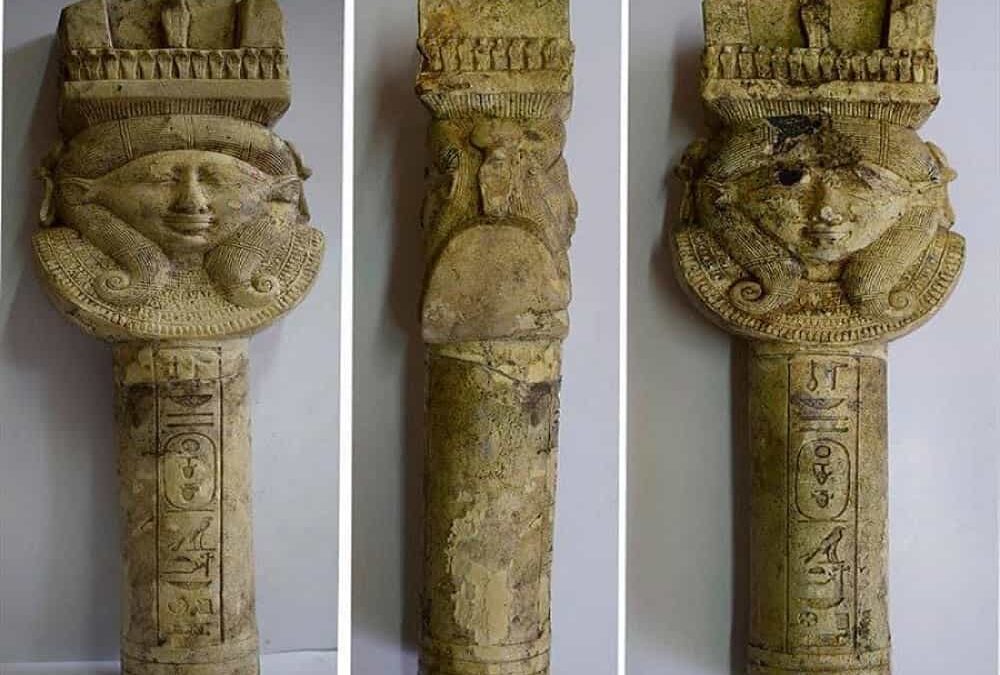 A team of Egyptian archaeologists has discovered in the temple of the cobra goddess Wadjet at the site of Tell el-Farain (the ancient city of Buto), in the delta of the Nile, a series of objects that the priests used in worship ceremonies that took place in this sanctuary.

A team of Egyptian archaeologists excavating the site of the ancient city of Buto, now known as Tell el-Farain (meaning the hill of the pharaohs), in Kafr el-Sheikh governorate, north of Cairo, has just finished exhume in the temple of this town, dedicated to the cobra goddess Wadjet, an interesting collection of objects that apparently were used in the religious rituals that took place in this sanctuary.

This new discovery has taken place within the framework of the campaign of archaeological excavations that the Egyptian authorities are carrying out at different sites in the country.

Mustafa Waziri, Secretary General of the Supreme Council of Antiquities of Egypt, has declared to be impressed by the importance of the find, since it is not usual to find in situ the instruments that the ancient Egyptian priests used to carry out their rituals.

The temple of the cobra goddess

Buto (in Egyptian Per-Wadjet) was the capital of Lower Egypt during the Protodynamic Period, until its conquest by the southern kingdom of Nejen, in Upper Egypt.

From the 8th century BC, it seems that the place would regain some importance.

As Mustafa Waziri explains, Buto was the traditional home of the cobra goddess Wadjet, a tutelary deity of Lower Egypt, who along with the vulture goddess Nekhbet, patron of Upper Egypt, were the protective deities of royalty (both made up the royal Uraeus that the pharaoh girded on his forehead).

For her part, the cow goddess Hathor, one of the most important deities in the Egyptian pantheon, and who is often depicted holding a sun disk, protected kings and also women during childbirth.

Therefore, Hathor was worshiped here as the “nursemaid” of the child god Horus, who was also known as the “Eye of Wadjet“.

The ritual instruments that archaeologists have located at the Tel al-Farain temple include part of a limestone pillar representing the cow goddess Hathor and a group of incense burners made of faience, one of them decorated with the head of the Falcon god Horus, son of Isis and Osiris, and divinity with which the pharaoh was identified in life.

The objects discovered also include a group of clay pots that were used in religious and ceremonial rituals performed in honor of Hathor, a collection of statuettes representing the hippopotamus goddess Taueret, a deity to whom women went to get pregnant and have a good delivery, and the moon god Thoth, as well as a small maternity chair, a large support for offerings, an Eye of Wadjet of pure gold and the remains of some gold sheets that were used in the gilding of some pieces.

Aymen Ashmawy, head of the Ancient Egyptian Antiquities Sector, pointed out that during the work the archaeologists have also brought to light a magnificent group of ivories with scenes of women carrying offerings, of daily life, plants, birds and animals.

As well as a large limestone lintel covered in hieroglyphic texts, along with part of a painting showing a monarch performing religious rituals in the temple.

Hieroglyphic inscriptions have also been discovered with the five names of Pharaoh Psamtik I (664-610 BC) and the name of Amasis (570-526 BC), both from the Twenty-sixth Dynasty.

Hossam Ghoneim, director general of Antiquities of Kafr El-Sheikh and director of the archaeological mission, added that in the course of the excavations a large well of polished limestone that was used to contain the sacred water and a bath of Ptolemaic era made with mud bricks that consists of a tub, a container and a place to heat the water used for rituals.

Pharaoh's architects, the builders of Egypt