Home / Tutankhamun as the Lotus Bloom 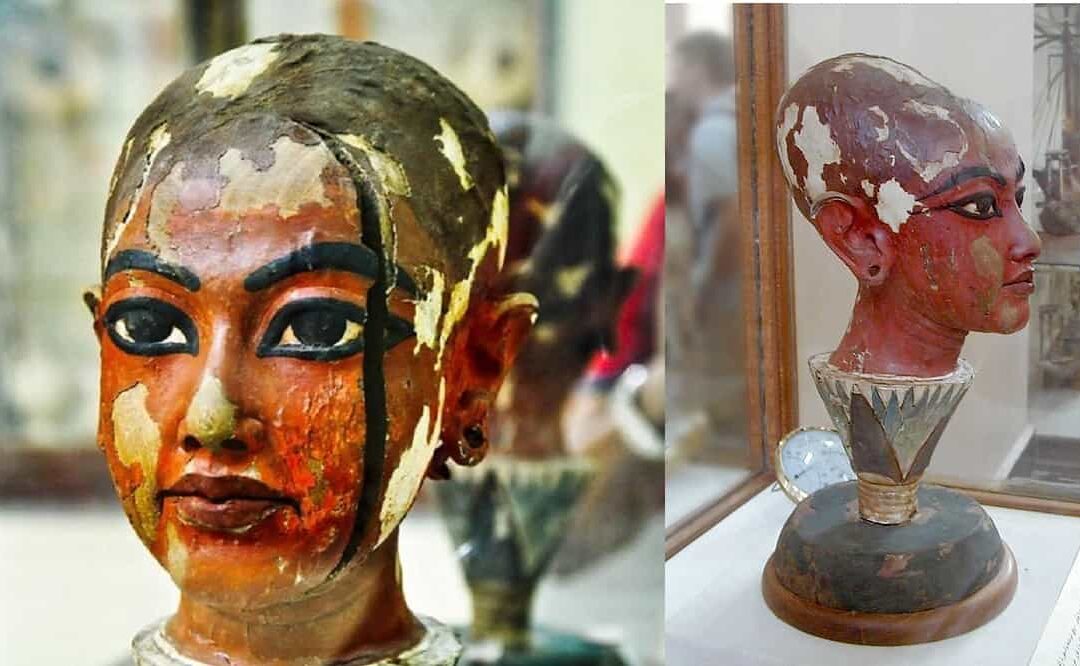 The Head of Nefertem (also known as the Head from the Lotus Bloom or Tutankhamun as the Sun God) was found in the tomb of Tutankhamun (KV62) in the Valley of the Kings in West Thebes.

It depicts the King as a child and dates from the 18th Dynasty (New Kingdom). The object received the find number of 8 and today is displayed with the inventory number JE 60723 in the Egyptian Museum in Cairo.

The discovery of the Head of Nefertem is controversial, since Howard Carter did not document the piece in his excavation journal.

The Head was found in 1924 by Pierre Lacau and Rex Engelbach in KV4 (the tomb of Ramses XI), which was used as a storehouse for the excavation efforts, among the bottles in a box of red wine.

At this time, Carter was not in Egypt on account of the strike and closure of Tutankhamun’s tomb and the withdrawal or cancellation of the excavation license of Lord Carnarvon’s widow Almina, Lady Carnarvon.

Carter later stated that he had found the head among the rubble in the entry corridor of KV62. In his first season of excavations, the head was not mentioned; at the time Carter only noted partially broken and full-standing alabaster vessels and vases of painted clay in the entrance-way.

There is not even photographic documentation of the head in the excavation journal as there is for other pieces found in the tomb.

Archaeologist Howard Carter, in order to resolve the situation and quell suspicions of his possible attempts to “make it disappear”, then declared that the unique figurine had been located in the corridor area and that it had not yet been fully inventoried.

Tutankhamun as the (Head of Nefertem), in principle, has a symbolic and propitiatory function, that is, it is a kind of sophisticated talisman.

Its simple but highly narrative design is made up of three elements:

A turquoise-green base on which a large open lotus fits and supports; and on the flower, in an austere way, without any ornamental element or headdress, stands the face of Tutankhamun.

The monarch’s face was captured with boyish features, full lips, a thoughtful smile, a delicate nose and large almond-shaped eyes with dark pupils.

His eyes are very striking, being also underlined by the elegant eyebrows. And to give even greater liveliness to the gaze, the white background was tinged with slight reddish touches, emulating the small veins of the eyeball.

Also shown in detail are the king’s ears and the perforations that were used so that he could wear earrings that, judging by the variety located in his tomb, must have been one of his favorite jewels.

However, possibly the most magnificent and singular detail of this work is the stippling made on the skull, representing the slight start of the shaved hair.

Also very striking is the shape of the head, elongated and deformed, evidencing influences from Amarna art.