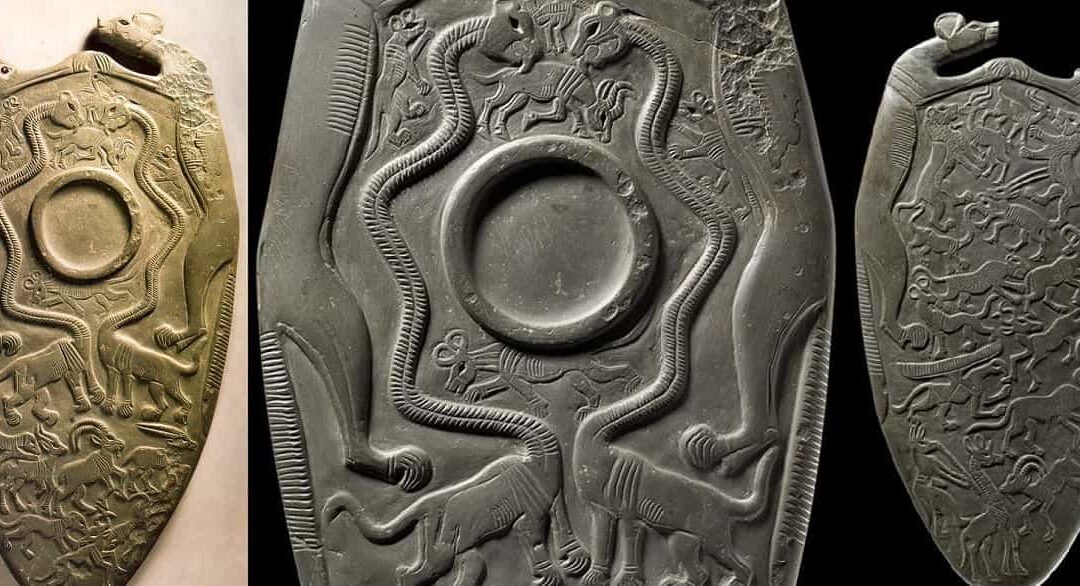 The Two Dog Palette is a ceremonial object from ancient Egypt that was used for grinding body pigments. It is made of siltstone and features low relief carvings on both sides.

The top of the palette is framed by a pair of Cape hunting dogs, which gives the object its name. The central depression is surrounded by mythical creatures with long snaking necks, known as serpopards, that are shown licking the body of a gazelle.

The reverse side of the palette depicts a scene of wild animals attacking herbivores native to North Africa. The scene includes a pair of lions, a serpopard, a leopard, a hyena, a griffin with comb-like wings, and a dog-like creature playing a flute.

The head of one of the dogs on the top of the palette is missing, and there are two drilled holes at the base of its neck, suggesting that it was repaired in the past.

The imagery on the Two Dog Palette may have been influenced by trade routes and was likely used by ancient Egyptian kings to express their power and otherworldly status. The palette was excavated at Hierakonpolis in southern Egypt and is considered one of the most famous examples of ancient Egyptian stone palettes.

The Ashmolean Museum is a museum of art and archaeology in Oxford, England. It is the University of Oxford’s oldest museum, founded in 1683. The museum is home to a wide range of art and archaeological objects from around the world, including ancient Egyptian, Greek, and Roman art, as well as European art from the Middle Ages to the present day. The museum’s collection also includes a number of important manuscripts, coins, and medals.