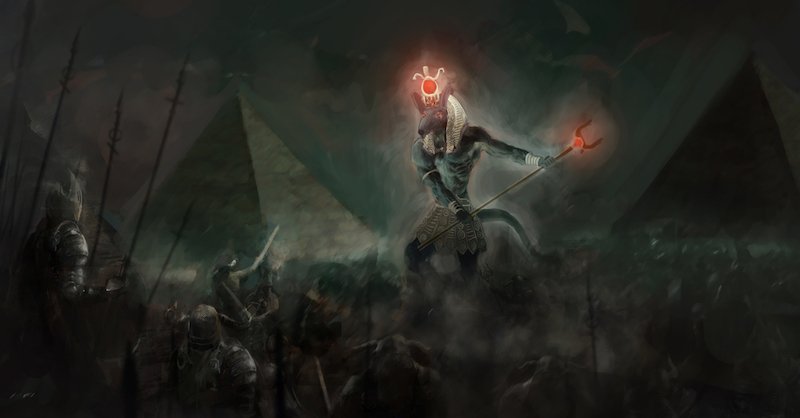 He is also considered the god of chaos, brute force, darkness and evil. It was said that this god is able to sow discord and confusion among enemies.

What animal is Set the God?

Representing Set is complex; his face always has an elongated snout and is believed to be from an anthill god. In any case, it has a human form and usually appears bearing the scepter ankh and uas.

When he is represented as an animal, it has not been possible to determine which, although he has a curved head, an erect tail and elongated ears with a square tip; on other occasions he is posed as a pig, a donkey-headed snake or an oryx.

This strange representation may have been determined to symbolize his enigmatic or complex personality, being a god with a brutal force used in ancient Egypt to show evil.

Why was Egyptian god Seth important?

The myth of the assassination of Osiris is what is most known about this deity, but, taking into account the cosmogony and order of the universe that the Egyptians sought, chaos and order were two forces that should be in constant struggle to achieve a balance, being represented by these two brothers.

Seth was husband and brother of Nephthys, the goddess of darkness and night. His child was Anubis, god of death.

Seth was granted the desert from the hands of Geb, the Earth god and his father, although he felt strong envy because Osiris obtained the fertile ground; nevertheless, the murder he would carry out could represent a necessary rebirth, in a symbolic way and the struggle he would have later with Horus, the son of Osiris, represents the reorganization of the ancient Egyptian state, both politically and militarily.

In fact, there are two different versions of this contest, in one it is found that Horus totally wins Seth, something that was affirmed in the temples of Horus, but in others it is stated that an agreement was reached to have stability as a whole, what which reflects the political reality of Egypt.

Initially, this myth was well known and Seth was placed as a principal deity who, in addition to representing this part of ancient Egyptian history, was the god of the desert, the protector of caravans and other beneficial attributes.

The problem was that the Egyptians began to worship the god Osiris in an increased way, leaving Seth as “the bad guy”, which is how he is known now.

What were Set’s powers?

It is also known that Seth is the one who protects Ra and his followers from both the Apophis snake and the desert, using his power over sandstorms to protect them.

What are the powers of god Horus?