Home / What does the Palette of Narmer reveal? 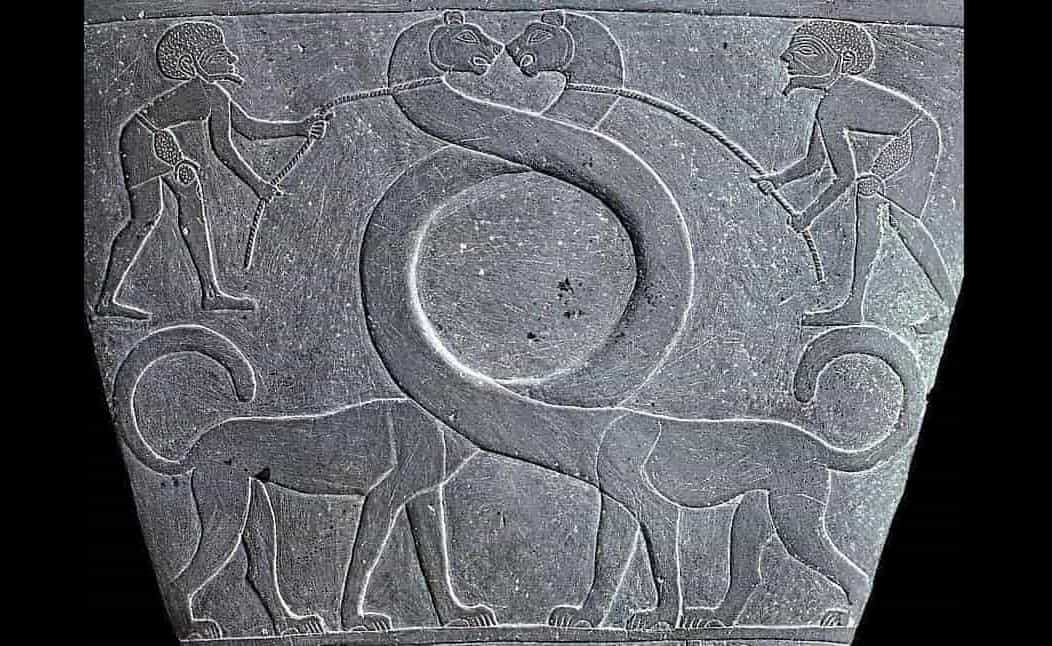 The Palette of King Narmer is one of the oldest and most important testimonies of the Predynastic Period of Ancient Egypt.

The Narmer one is made of schist, almost triangular in shape, 64 x 42 cm, and is dated around 3000 BC. It was found in 1898 among the relics of the Temple of Horus in Hierakonpolis near Edfu and is currently kept in the Egyptian Museum in Cairo.

Narmer, also identified as Menes, is the first king recorded in the Royal List of Abydos, which collects the names of almost all the pharaohs who ruled in the Nile Valley.

He is considered the founder of the First Dynasty and one of the main initiators of the organization of the Egyptian state.

The iconographic analysis of this palette reveals the purpose of glorifying the figure of Narmer and allows us to understand the political significance of his reign. The work is engraved with reliefs on both sides and documents the struggle to unify the north and south of the country.

The image on the left corresponds to the back of the palette, which is divided into three floors. In the one above, the King’s name is written with symbols inside a box supported by two cow heads that represent the goddess Hathor.

The heads have human features, one of the oldest figurations of divinity with these characteristics.

In the central register, Narmer appears large, dressed in the typical attributes of the ancient Egyptian sovereign: the white crown of Upper Egypt, a false beard, and a short skirt with an ox tail.

With his right hand, he raises a mace to slaughter a defeated enemy, whom he holds by the hair with his left hand.

This representation alludes to the King’s conquest of the north of the country. It inaugurates an iconography that will become common in ancient Egyptian art to demonstrate the military power of the pharaohs.

Narmer is accompanied by a minor character who is carrying the royal sandals. He is probably a priest, as indicated by his shaved head and the libation jar he carries in his right hand.

On the other side is the god Horus, personified as a falcon. He is perched on six papyrus stems that refer to the Nile Delta (Lower Egypt) and subdues an enemy by grabbing him by the nose with a hook; this iconography symbolizes how the god appropriates the breath or life of those who oppose him.

The inclusion of Horus is related to the belief that the pharaoh was really an incarnation of the god on earth and that his actions were guided by heavenly powers.

The names of Horus and Narmer were written with similar symbols. The figure is, therefore, a reflection of the conquering pharaoh who subjugated the Delta region and managed to unify the entire Nile Valley for the first time, imposing order over chaos.

Finally, the other side of the palette has four scenes. The upper one is similar to the one on the reverse, with an inscription framed between two cow heads.

On the next floor, Narmer appears wearing the red crown of Lower Egypt and other attributes that demonstrate his authority, such as the mace and the flail.

Again, he is accompanied by the sandal holder, who, in this case, carries a purification vessel. In front of the King are his vizier and four standard bearers that allude to various nomes or prefectures of the country.

To the right are ten ritually decapitated bodies, with their heads placed between their legs, alluding to Narmer’s victory over his opponents.

Above them is a falcon and a symbolic boat, probably used for the pilgrimage to the sacred cities of the Western Delta.

The third floor is entirely occupied by two fantastic quadrupeds with long intertwined necks, which two servants strive to hold tightly with ropes.

Surely it is an allegory of the unification and peace achieved between the North and South of ancient Egypt thanks to the rule of the pharaoh.

Finally, at the base of the entire composition, Narmer is shown as a powerful bull (ka-nkht) capable of bringing down the walls of a fortress while one of his enemies lies beneath his feet.

According to historians, this scene must represent the so-called “white victory”, the last phase of the war for the unification of ancient Egypt.