Home / The Temple of Horus at Edfu, The best-preserved Ancient Egyptian temple 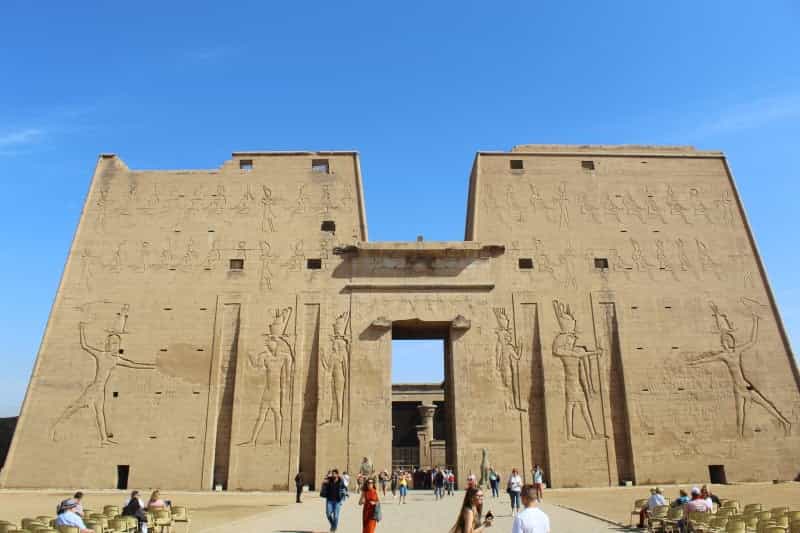 Temple of Edfu, one of the best preserved temples today that was dedicated to the god Horus and is located in the city of Edfu, on the west bank of the Nile River and is a great tourist point to visit on your trip to Egypt.

The Temple of Edfu was built between 237 BC and 57 BC during the Ptolemaic era, following the conquest of Egypt by Alexander the Great in 323 BC.

His successors, the Ptolemies, were Greek, but they imitated the traditions and replicated the architecture of the Egyptians of the time.

The Temple of Edfu is a Greco-Roman temple that was dedicated to the god Horus, becoming one of the largest in Ancient Egypt, only behind the Karnak Temple in Luxor, as well as being one of the best preserved in the country. Its length is 137 meters and a height of 36 meters.

As we have mentioned previously, the Ptolemies imitated the architectural constructions of the Pharaonic period and it has several typical instances of their architecture with the pylon, the hypo-style rooms, an offering chamber, in addition to the central room and the temple sanctuary.

The Temple of Edfu, through its inscriptions on the walls of the temple, provide us with information about its construction, mythological and religious references and how they lived in Ancient Egypt.

The entrance of the Temple of Edfu, in addition to being one of the best preserved, shows us through its giant 37-meter-high pylon, Ptomoleo XII, the last Ptolemaic ruler striking his enemies before the god Horus.

After passing the pylon, we find the hypethral room surrounded by columns on the sides and at the entrance to the next room of the temple, where the walls are decorated with reliefs.

From the back of the pylon you can see these reliefs that continue along the patio in its lower part behind the columns.

These inscriptions tell us some of the mythological stories of the divine battles of the time, such as the victory of Horus and Isis over Seth.

In addition to the Festival of the Beautiful Reunion, where you can see how the goddess Hathor sails from the Dendera temple, and the god Horus from the Temple of Edfu, to meet halfway.

This meeting was held twice a year and in one of them they traveled to the Dendera temple, and the second time to the Edfu temple.

Finally, at the entrance to the first hypo-style hall you can see a statue of the god Horus with the double crown of Upper and Lower Egypt, giving access to the hypo-style hall.

The hypo-style hall of the festivals is the oldest part of the temple and is composed of 12 decorated columns as well as several rooms for offerings, the Chamber of Consecrations where the king or priest dressed for rituals located on the left, and the Library on the right.

Later, we will access the second hypo-style room where we will again find rows of columns on each side of the room supporting the intact ceiling of the temple with interesting reliefs on astronomy and representations of the sky.

Among the 4 small rooms for the offerings, one of them is the famous laboratory where you can find the formulas of Egyptian essences and ointments that, later, the French used to make the most popular perfumes known today.

Through a door with reliefs of the ships of Horus and Hathor we will access the room of offerings.

The Offering Room and the Shrine of Horus

The offering room is connected to the terraces through a staircase and gives access to the central room, the place of the chapel dedicated to the god Min, the lunar god of fertility and vegetation.

After the central hall we arrive at the famous sanctuary of the god Horus, undoubtedly the most sacred part of the temple which was built with black granite and where you can see the table of offerings and the ceremonial boat in which Horus was carried during festivals..

On the other hand, on the walls we will find reliefs where Ptolemy IV is shown making offerings.