Home / The Beautiful Harp from the Tomb of Ani 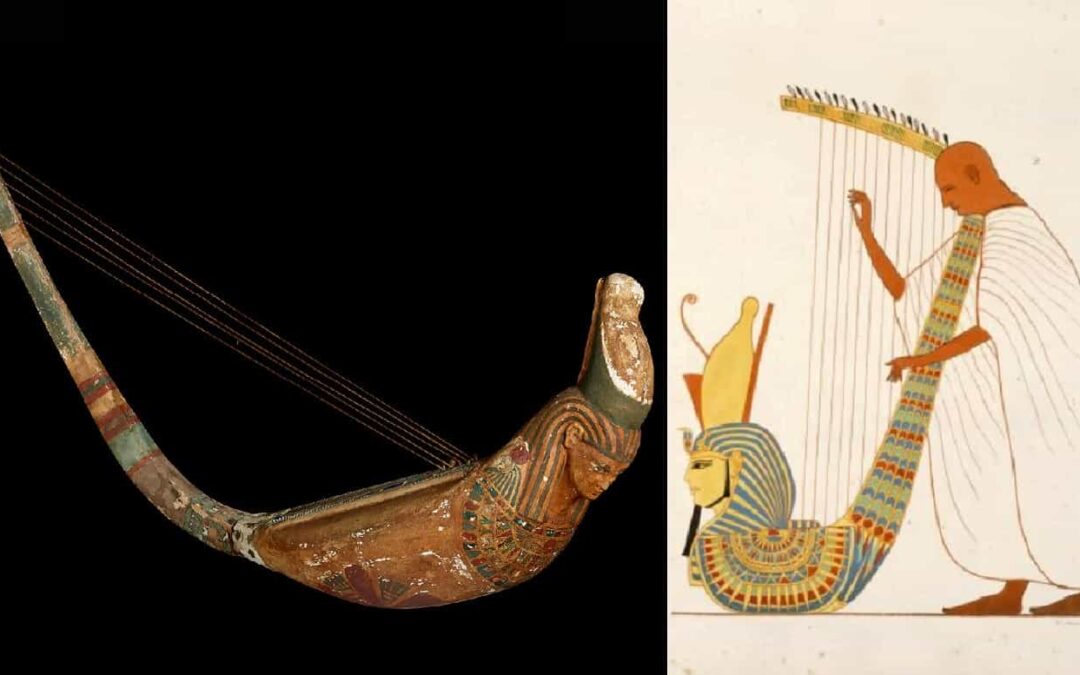 The harp from the Tomb of Ani is a musical instrument dated between 1,069 BC and 1,550 BC, belonging to ancient Egyptian art.

It was made at the time of the New Kingdom of ancient Egypt, during the eighteenth dynasty.

It was found inside Ani’s tomb during archaeological excavations in the ancient city of Thebes (Egypt).

In 1976, it appeared in the third volume on musical instruments in the British Museum’s catalog of Egyptian Antiquities, written by the Egyptologist Robert David Anderson.

Ani was a royal scribe during the reign of Pharaoh Amenhotep II—the seventh pharaoh of the eighteenth dynasty of ancient Egypt.

He performed the functions of State Administrator and scribe of the offerings of the god Aten (solar deity of Ancient Egypt, representing the solar disc in the sky, and considered the spirit that encouraged life on Earth).

It has a maximum length of 97 cm, a width in the sound box of 12 cm, and a diameter of 9 cm. It is made of wood inlaid with faience (glazed ceramic) and bone.

It is a musical instrument, an arched wooden harp shaped like a spoon. It should be emphasized that harps were often displayed in banquet scenes, decorating the walls of tombs.

The sound or resonance box is shaped like a head of a divinity, which is evident in how it is crowned by the double crown and a striped headdress.

The lower part and the lower area of the harp’s neck are decorated with a floral pattern.

It should be noted that the falcon head, located on the upper part of the neck, is a unique characteristic of this type of harp.

In addition, a harp usually has between nine and eleven strings, but the harp from the Tomb of Ani only has five.

On the upper back of the neck, you can see five wooden pegs. Three of them still have the flared pommels, and the pins are firmly fixed.

In Ancient Egypt, instruments with this shape used to be played by male soloists.

It should be noted that the vast majority of songs performed at a banquet were dedicated to a deity, usually the god Amun—the most important god in the city of Thebes.

It is currently in the British Museum in London, England.

The Secret Passageway that Could Lead to Cleopatra's Tomb