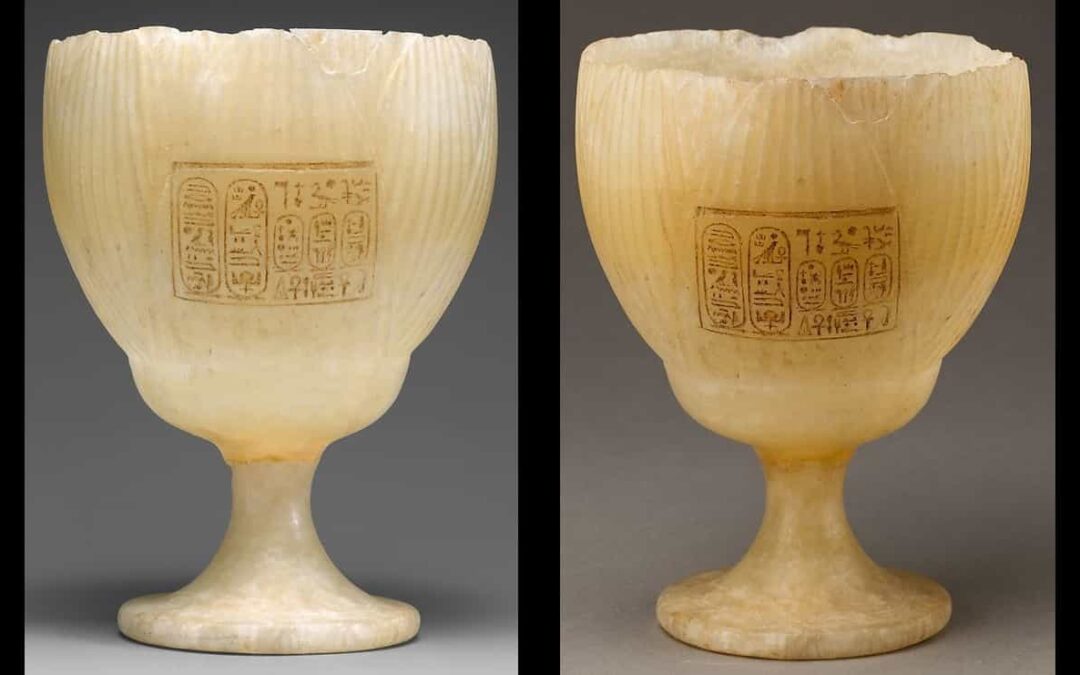 The Cup of Amenhotep IV and Nefertiti dates back approximately between 1,353 BC and 1,336 BC. It, therefore, belongs to ancient Egyptian art.

Specifically, the cup was made during the Eighteenth Dynasty of Ancient Egypt.

The first known fact about the cup is that it was bought from Nicholas Tano in Cairo, Egypt, in 1922 AD.

The American philanthropic Edward Stephen Harkness later bought the cup. In the same year, 1922 AD, Harkness donated it to the Metropolitan Museum of Art in New York (United States of America), where it became part of the museum’s art collection.

The cup has a height of 14 cm and a diameter of 10.5 cm. It is made of alabaster, using incision and carving techniques.

It is a cup, a container of four parts: the foot or base, the stem, the chalice, and the mouth.

It should be noted that this translucent cup is shaped like a white lotus flower, and many researchers appreciate the cup both for its beauty and its historical interest.

On the outside of the chalice is a rectangle containing a hieroglyphic inscription.

The throne name (Nefer-kheperu-Re, beloved of Re) and personal name of Amenhotep IV are inscribed in the small panel on the side, between two cartouches surrounding the early titulary of the Aten (left), and a cartouche naming the principal queen, Nefertiti (right).

Amenhotep IV (also known as Akhenaten) was the tenth pharaoh of the Eighteenth Dynasty of Ancient Egypt.

Nefertiti was the first great royal wife of Amenhotep IV.

Finally, it is worth emphasizing that the cup is thought to have been made before the fifth year of the pharaoh’s reign.

It was likely made before this time as Amenhotep IV changed his name to Akhenaten in the fourth year of his reign.

It is currently in the Metropolitan Museum of Art in New York, United States of America.