Home / The Canopic Jars, guardians of the viscera of the deceased

The Canopic Jars, guardians of the viscera of the deceased 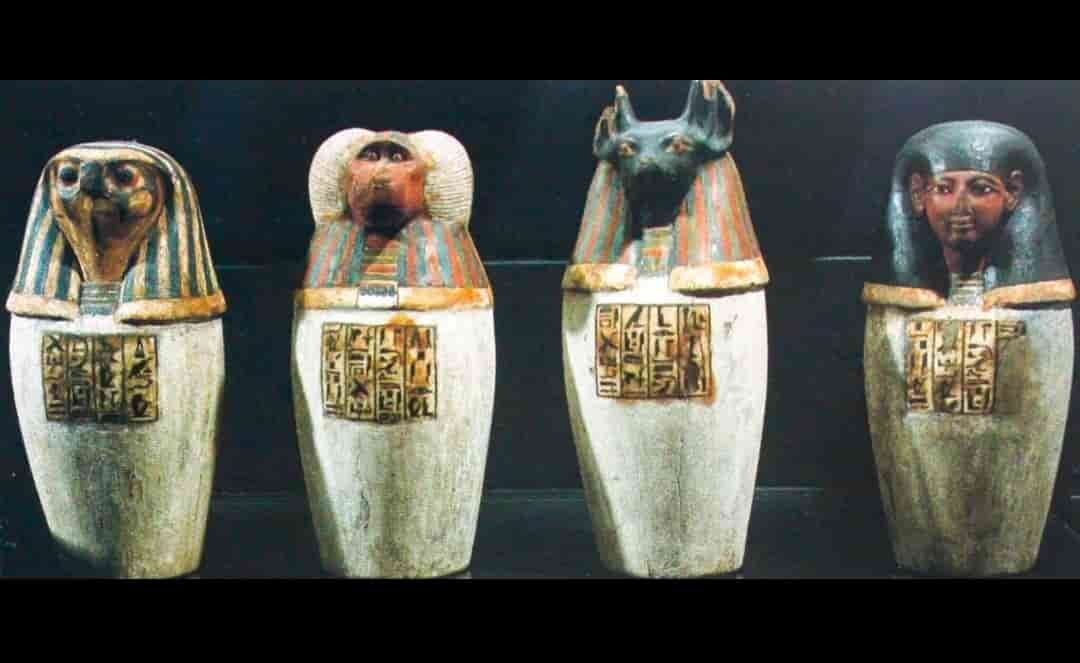 In ancient Egypt, during the mummification process, internal organs were extracted and after being mummified separately, they were kept in special containers (canopic jar) that were placed next to the mummy.

The presence of these objects would be a constant throughout most of the history of ancient Egypt and today they are a valuable source of information for archaeologists.

In ancient Egypt, during the mummification process, internal organs were removed from the body of the deceased to be mummified separately. The viscera were washed with palm wine and spices, dehydrated and bandaged with strips of flax.

After this process, they were deposited in containers called “canopic jars”, immersed in liquid natron (a saline solution).

These jars are named after a mistake made by the first Egyptologists, who associated the figures represented on the lids of these jars with the figure of Canopus, helmsman of Menelaus, the legendary king of Sparta and husband of the beautiful Helen of Troy, who he was worshiped in the form of a jug.

These jars were normally carved in limestone or alabaster, and had on their exterior drawings or inscriptions relating to the deceased and to life in the afterlife.

What the sources reveal

The first news we have about mummification comes from the Greek historian Herodotus, from the 6th century BC, who in the second book of his Histories, dedicated to Egypt, details this process, although he does not offer data on the final fate of the internal organs of the deceased.

This subject is dealt with by the historian Diodorus Siculus, who lived in the first century BC. Although Diodorus does not specify what was done with the viscera, he does explain that they were extracted and washed.

He is also correct in the fact that the heart was left in its place (the ancient Egyptians considered the heart the governing organ of the body instead of the brain).

As for the final destination of the organs, we have other testimonies, such as the later one from Porfirio (3rd century AD) or that of the Roman historian Plutarch (1st and 2nd centuries AD), which differ in certain nuances.

According to Porfirio, “there is a point that should not be overlooked, that is, when the bodies of the rich class are embalmed, among other care given to the corpse, the intestines are privately extracted and placed in a chest, so that be the first to appear as soon as possible before the Sun, while one of those who are busy embalming the corpse recites a prayer … “.

For his part, Plutarch , although he agrees that the internal organs were extracted and presented to the Sun, curiously he claims that their final destination was to be thrown into the Nile, a claim that, given the large number of canopic jars that archaeologists have recovered from Egyptian tombs of all periods, does not hold.

The sons of Horus

The earliest known canopic jars date from the Fourth Dynasty (2543-2436 BC). It was in this period when the viscera of the deceased began to be extracted and placed in differentiated containers.

This practice continued until the Nineteenth Dynasty (1292-1191 BC) without interruption. But what did change is the shape of these containers.

Originally, canopic jars were built into a “canopoe box” and their lids were flat or slightly conical. It would be during the First Intermediate Period (2100-1940 BC) when these plain lids were replaced by others in the shape of a human head that represented the deceased, a fashion that lasted until the Eighteenth Dynasty (1539-1292 BC).

It would be at the end of this dynasty when the shape of the lids of the canopic jars began to change, and only one of them continued to be human; the other three took on animal form.

From then on, each of these containers and their contents were placed under the protection of the so-called “sons of Horus“, and each lid represented the head of one of these characters.

Imsety , who was the guardian of the stomach and small intestine, had a human form.

Duamutef , with the head of a jackal, was the custodian of the lungs.

Hapy , with the head of a baboon, was in charge of the large intestine.

Qebehsenuef , with the head of a hawk, it protected the liver and gallbladder.

These divine beings were also sometimes placed in the tombs in the form of amulets, sewn to the external bandages of the mummy, to enhance their protective effect.

Sometimes they were also oriented to the cardinal points: Imsety to the South, Hapy to the North, Qebehsenuef to the West and Duamutef to the East.

Towards the Twenty-first Dynasty (1076-944 BC), the use of canopic jars began to decline and the practice of extracting the organs, mummifying them and reintroducing them into the abdominal cavity was imposed. Empty canopic jars have been found from this period, possibly having a purely ritual purpose.

Thus, the canopic jars did not return to contain the viscera of the deceased until the Twenty-sixth Dynasty (664-525 BC), although, from then on, the presence of this type of containers becomes increasingly scarce in the tombs, being already practically non-existent during the Ptolemaic and Roman periods, possibly due to the arrival of new beliefs.

The most beautiful canopic chest

As mentioned above, the first canopic jars that we have evidence of date from the Fourth Dynasty. Specifically, they are those belonging to Queen Hetepheres, mother of Pharaoh Khufu, the builder of the Great Pyramid.

The tomb of Hetepheres was discovered by the American archaeologist George Reisner in 1925, and inside it was found an alabaster canopic chest with four compartments, in each of which had been deposited a “package” containing what appeared to be the mummified internal organs of the queen. In this case, the caps were flat or slightly tapered.

Although archaeologists have found many canopic vjars, some of great artistic quality, undoubtedly one of the most beautiful specimens that have come down to us belongs to the pharaoh Tutankhamun, and is a magnificent example of the shape and decoration that these funerary jars acquired during the New Kingdom.

The canopic chest of the child king was worked from a single block of calcite, divided into four shallow compartments. The four corners of this chest showed figures in relief of the goddesses Isis, Nephthys, Selket and Neith.

Each of them was associated with one of the sons of Horus, protectors of the mummified organs: Qebehsenuef placed himself under the protection of Selket; Duamutef in the custody of Neith; Imsety from Isis and Hapy from Nephthys.

Each compartment was closed with a calcite lid sculpted in the shape of the pharaoh’s head, worn with a nemes handkerchief.

But the king’s organs, unlike in other cases, had not been placed directly inside the compartments, but had been arranged inside small miniature gold coffins, each of which was wrapped in linen, bathed in aromatic ointments and placed in the corresponding compartment.

Today, archaeologists and researchers are convinced that the study of the content of canopic jars with the most modern scientific techniques, such as Computed Tomography, can provide highly relevant genetic data and will allow DNA profiles to be drawn that will help establish kinship relationships between different individuals, as well as to discover what diseases these people suffered (it must be taken into account that many canopic jars are sealed, so their content can be intact and be an invaluable source of information ).

Indeed, modern Egyptology has high hopes for the study of these valuable messengers from the past.